NORTH Korea’s nuclear programme is feared to be leaking toxic waste which could be contaminating 400,000 people — risking cancer and horrible birth defects.

Disturbing photos appear to reveal how a uranium plant in the north of the country is spilling huge amounts of toxic waste into a river which provides water to drink and for crops. 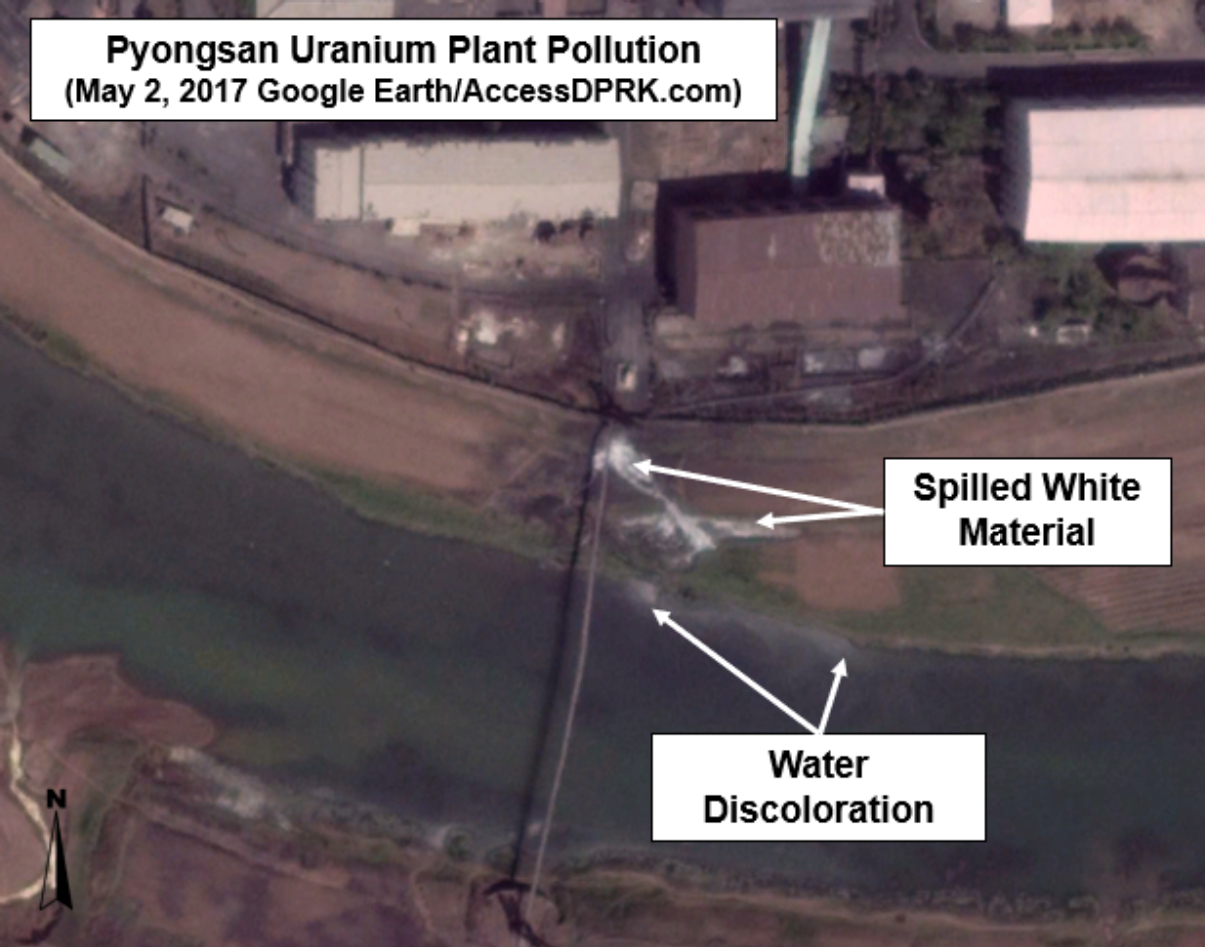 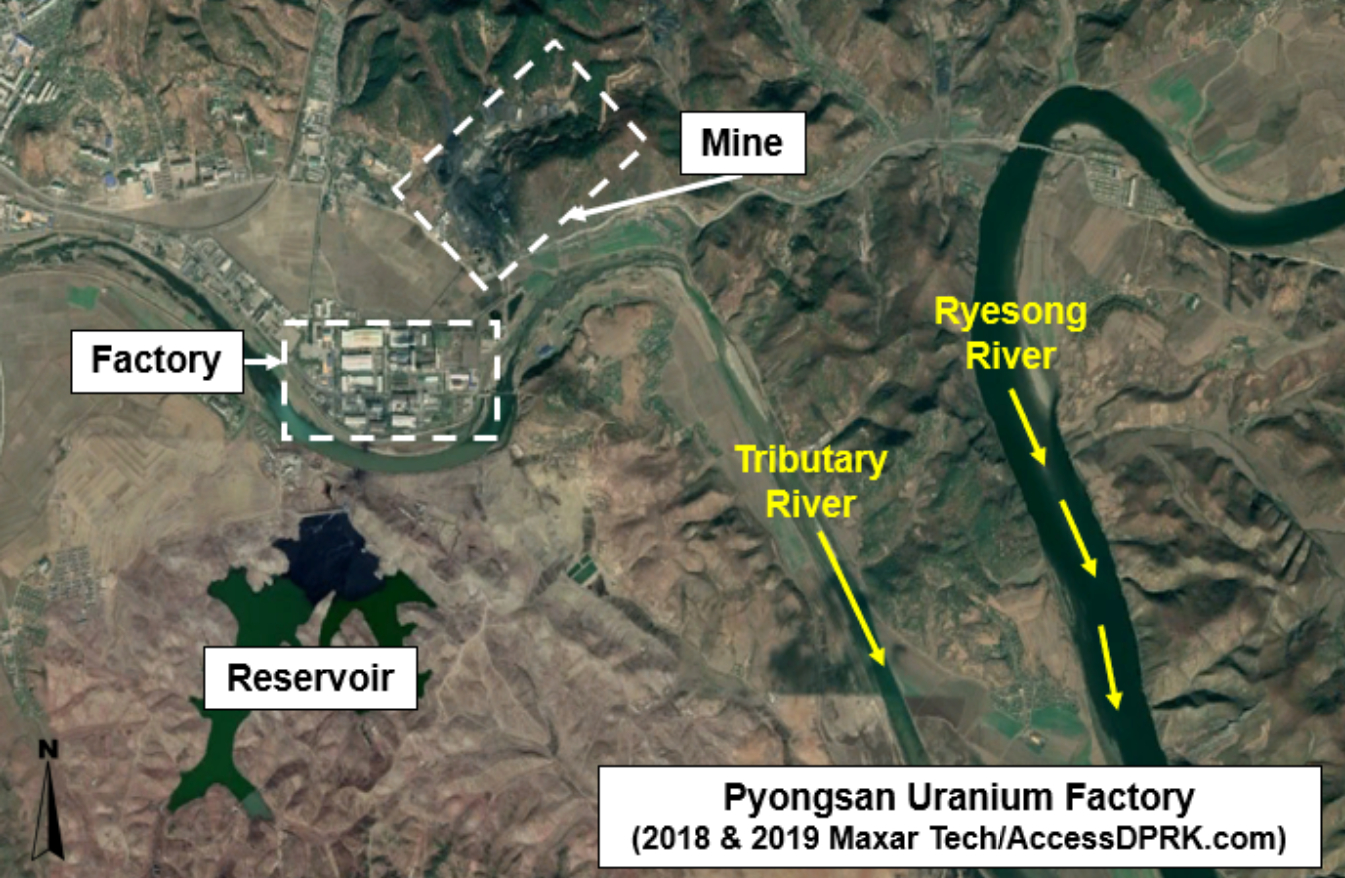 The toxic sludge is flowing into the river, water from which is drunk by thousands of peopleCredit: Michael Havis

The waste can be seen building up in a reservoir neighbouring the plant, but also leaking into the riverCredit: Michael Havis
The potential radioactive leak was discovered by eagle-eyed US-based researcher Jacob Bogle.

By examining satellite images of the Pyongsan uranium site, Mr Bogle believes a horror has been unfolding which has been covered up by the highly secretive and insular state.

But he thinks the catastrophe may soon be hard to hide because the toxic leak is now flowing into the Yellow Sea the country shares with neighbouring South Korea and China.

This could ultimately affect an estimated 600million people and end up being the world’s worst man-made disaster.

In the photos, a pipeline built to carry toxic water from the facility to a nearby waste reservoir appears to be leaking into a river instead, which in turn empties into the Yellow Sea.

Mr Bogle said: “I was able to review high-resolution historical satellite imagery for multiple years going back to 2003.

“Each of the images shows an ever-growing pile of leaked material on either end of the pipe that takes waste material from the plant to an unlined reservoir.

“Some of the images also show fluids being actively spilled directly into the river.

“The plant is one of two declared uranium milling facilities in the country. It takes low-quality coal and processes it to create yellowcake, which then contains around 80 per cent uranium.

“The extraction and milling requires multiple chemical processes and leaves behind a very toxic mix of waste materials.

“That toxic waste is then sent to the nearby reservoir, leaking and travelling into the Ryesong River in the process.” 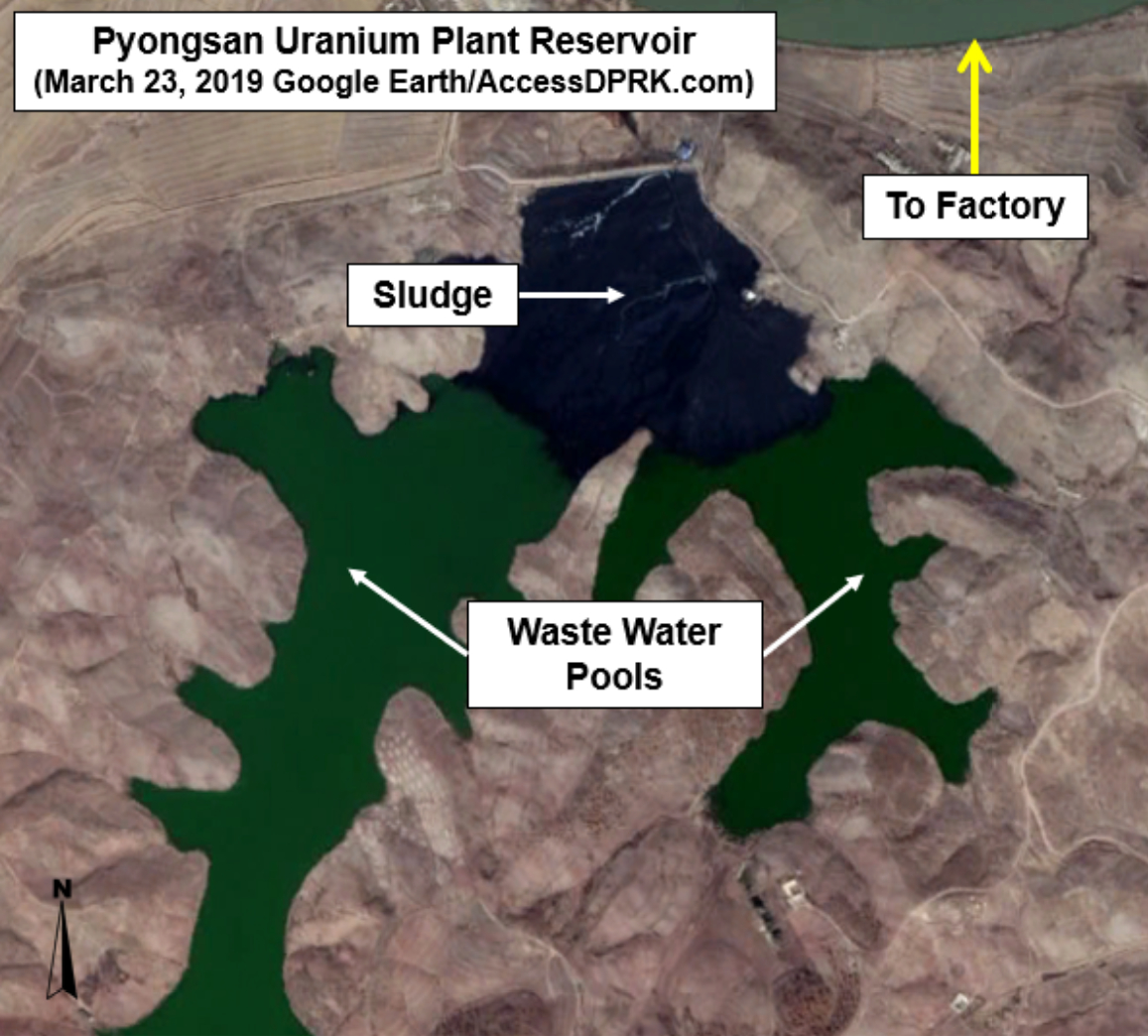 The poisonous sludge has been building up for years in the reservoir, but it appears to have been leakingCredit: Michael Havis
MILLIONS MORE AT RISK

Mr Bogle estimates that, within just 9.3miles of the Ryesong, there could be as many as 400,000 people drinking the river water or eat the crops fed by it.

The Ryesong ultimately empties into the Han River estuary, which in turn flows into the Yellow Sea between China and North Korea.

Some 600 million people could be at risk.

Mr Bogle said: “The waste material will contain everything that is left over from the coal and any contaminated water.

“Uranium milling produces radium, which is radioactive, and that will be sent through the leaking pipe along with the other contaminants like lead, arsenic, vanadium, and other heavy metals.

“The radium will decay into the gas radon, which will enter the atmosphere each time the plant runs.

“While the other materials will leak into any groundwater sources and of course be carried downriver.”

He continued: “Defector testimony from other nuclear-related sites like Yongbyon and the nuclear-test mountain report major health effects, such as cancer, respiratory problems, and birth defects.

“There is no reason to suspect the people near Pyongsan are immune to the effects of radon and heavy metals.

“Radon will be carried throughout the area and can cause lung cancer.

“Lead and arsenic poisoning can cause neurological problems, especially among children.

“At dangerous levels, the other heavy metals can cause a wide range of health problems.”

The plant was constructed in the 1980s – and though imagery of the site is only available from 2003 onwards, Mr Bogle says that even in those early photos the leak is visible.

To get an idea of just how much could have leaked in that time, Mr Bogle has also analysed the buildup of waste in the nearby reservoir. 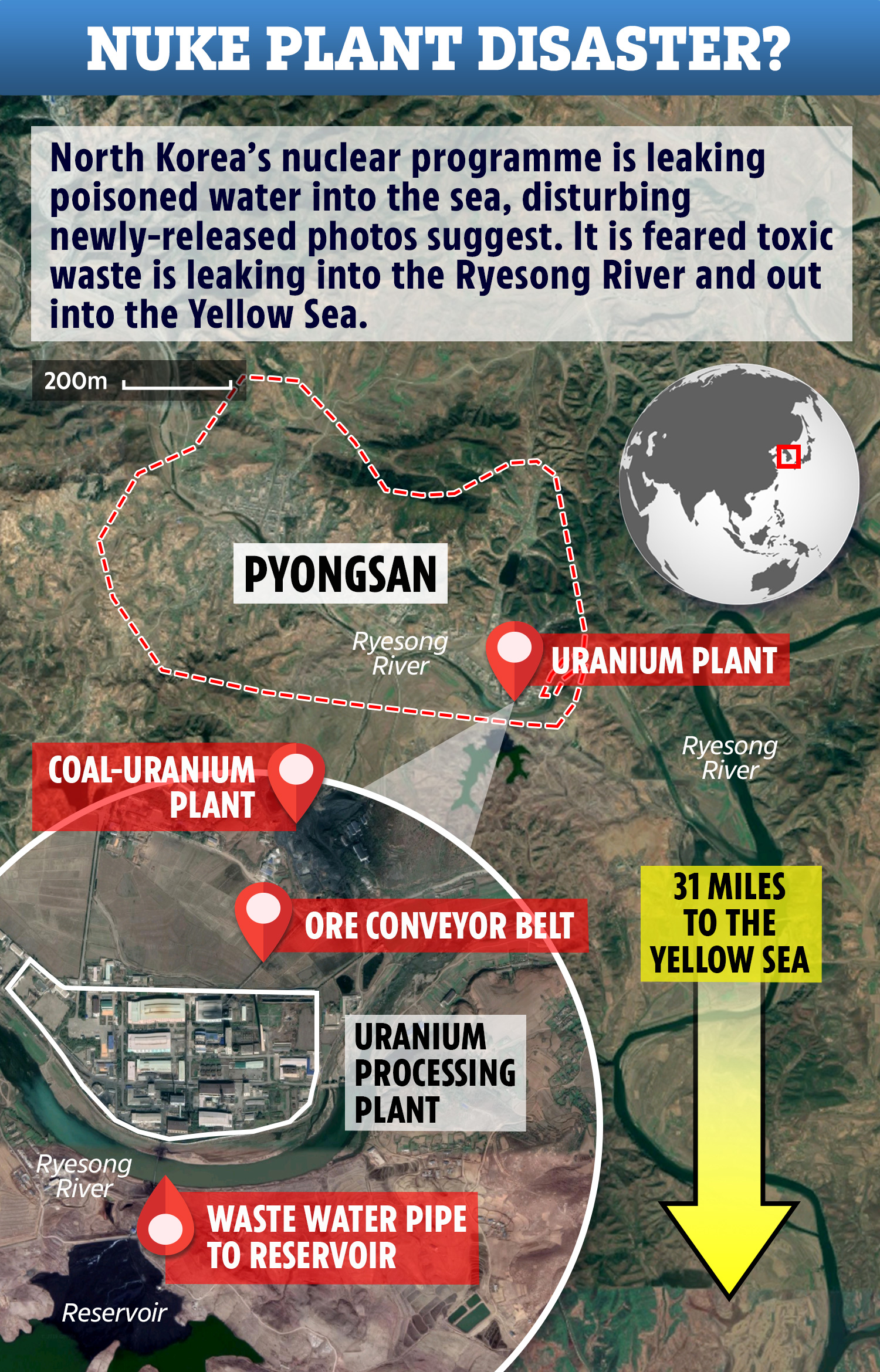 “The leak only occurs whenever the plant is in production,” he said.

“But given the enormous growth of the sludge pile within the reservoir, it wouldn't be an aggressive estimate to suggest that at least hundreds of gallons of contaminated material are spilled into the river each day the plant runs.”

Because of the closed-off nature of North Korea, the leak can’t be verified on the ground.

But Mr Bogle, whose map of the country is freely downloadable at accessdprk.com, believes the available evidence is clear.

Despite promising US President Donald Trump that he was giving up his nuclear weapons programme, North Korean leader Kim Jong-un has been forging ahead with his ambitions to be a global power.

Last week, Kim was photographed looking overjoyed after his fifth round of ballistic missile tests in less than three weeks 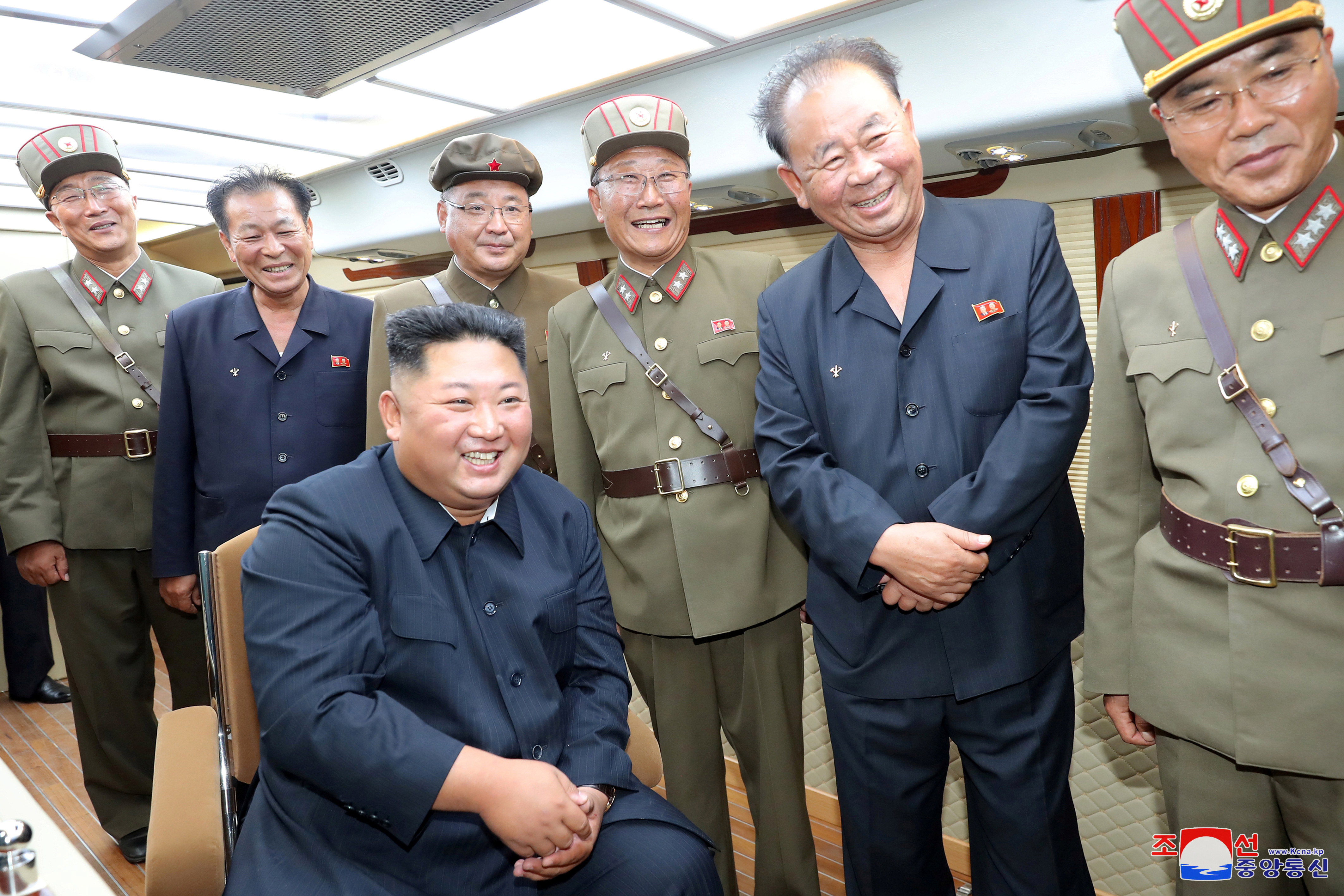