"Here is a man trying to become President,
who actually fed his own wife baby shit,
actually trying to give orders to a U.S. President"! 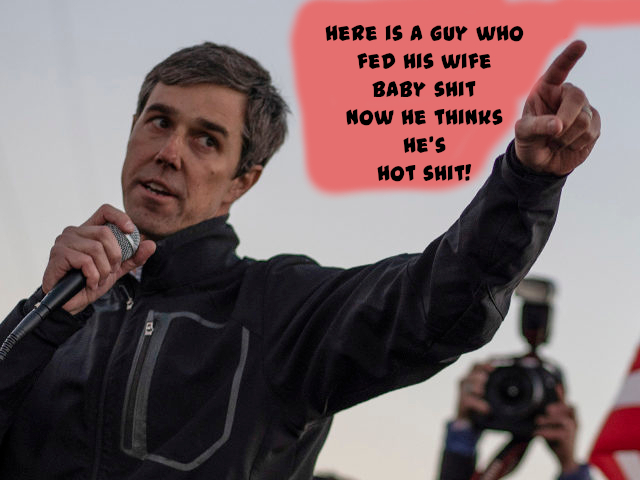 
2020 White House hopeful and former Rep. Robert Francis “Beto” O’Rourke (D-TX) is calling on President Donald Trump not to visit El Paso in the wake of the mass shooting in his former district.

“This president, who helped create the hatred that made Saturday’s tragedy possible, should not come to El Paso. We do not need more division,” O’Rourke wrote on Twitter. “We need to heal. He has no place here.”

O’Rourke is the latest Democrat to urge the president to steer clear of El Paso after a gunman shot dead 22 people at a Walmart. The suspect, 21-year-old Patrick Crusius, was charged with capital murder, making him eligible for the death penalty. The Justice Department is weighing bringing hate crime charges against Crusius, which also carries the death penalty. Hours later, a gunman killed 9 people, including his sister, after opening fire in a busy bar district in Dayton, Ohio. Police killed gunman 24-year-old Connor Betts within one minute after he began shooting.

O’Rourke on Saturday left to the campaign trail to be in El Paso after the shooting, where he attempted to tie President Trump to the tragedy.

“He is a racist, and he stokes racism in this country. And it does not just offend our sensibilities, it fundamentally changes the character of this country, and it leads to violence,” he told reporters. “And again, there are still details that we are waiting on, but I’m just following the lead that I’ve heard from the El Paso Police Department where they say there are strong indications that this shooter wrote that manifesto and this was inspired by his hatred of people here in this community.”

Appearing on CNN the following day, the Texas Democrat accused the president of being a white nationalist, who uses rhetoric “reminiscent of Third Reich.”

“Let’s be clear who the president is, he is an open avowed racist and encouraging more racism in this country and this is incredibly dangerous for the United States of America right now,” he told host Jake Tapper. “All of us have a responsibility to stand up and be counted on this issue.”

Earlier Monday, Rep. Veronica Escobar (D-TX) said President Trump is not “welcome” to in El Paso and should “accept responsibility” that his rhetoric was a contributing factor to the massacre.

“I would encourage the president’s staff members to have him do a little self-reflection. I would encourage them to show him his own words and his actions at the rallies because we’re not going to get past this until there’s acknowledgment from the very top that we need to heal, that this whole country is hurting, that there has been bigotry and racism and hatred that has been stoked at all levels,” Escobar told MSNBC’s Morning Joe. “And as the president, he has the most significant authority and responsibility to show this country, to lead this country into healing. And now is the time, and he needs to accept responsibility, everyone does, for what has gotten us to this point.”

Crusius is believed to have posted a manifesto online railing against Hispanic immigrants.

President Trump delivered a scheduled speech at the White House on the shootings, declaring the United States “must condemn racism, bigotry, and white supremacy.”

“These sinister ideologies must be defeated. Hate has no place in America,” the president said.

“These barbaric slaughters are an assault upon our communities, an attack upon our nation, and a crime against all of humanity,” he added. “We are outraged and sickened by this monstrous evil.”

In the wake of the shootings, President Trump has suggested merging immigration reform and background check legislation.

“We cannot let those killed in El Paso, Texas and Dayton, Ohio, die in vain,” the president tweeted. “We can never forget them, and those many who came before them.

“Republicans and Democrats must come together and get strong background checks, perhaps marrying this legislation with desperately needed immigration reform. We must have something good, if not GREAT, come out of these two tragic events!” he added.