Amazon delivery robots are officially on the streets of California


Amazon has robots on the streets. It's a good bet urban delivery will never be the same. 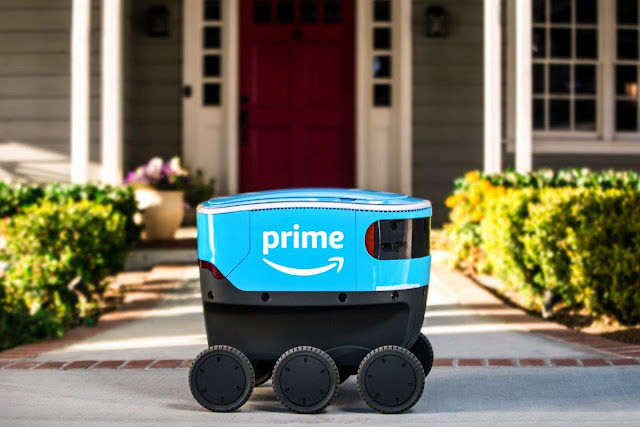 Amazon has previously tested its delivery robots in Washington State, but this marks the first California deployment. The robots, deployed in the Irvine area, will drive during daytime hours. Though designed to operate autonomously, the test robots will be accompanied by humans to ensure nothing goes wrong. So-called "Scout Ambassadors" will also be gauging public reaction to the robots, which is a big X-factor in plans to deploy autonomous mobile robots on city streets.

Amazon is actually late to the party with its foray into ground robots for delivery. Other companies, such as Starship Technologies, are making active deliveries in the UK and on the campus of George Mason University, with more than 50,000 reported parcel drop-offs.

A company called Refraction AI created a low-cost, lightweight delivery robot named REV-1, which can operate in both the bike lane and on the shoulder of roads. The company, which recently came out of stealth, is the brainchild of two University of Michigan professors, Matthew Johnson-Roberson and Ram Vasudevan.

Indeed, one of the big foreseeable problems with delivery robots like Amazon's six-wheeled Scout is that it must share sidewalk space with pedestrians, real estate that's at a premium in many metropolises. City legislatures may be keen to restrict sidewalk access if there's loud opposition.

Still, no one in the industry doubts that the Bezos juggernaut will be a major deployer of unmanned ground robots in the near future. By taking cars off roads, developers of last-mile delivery robots tout environmental and standard of living benefits to their technology. And as companies like Uber and Bird have proved, sometimes cities just don't have the nimbleness or muscle to stop a wave of new technology once momentum has set in.
at August 09, 2019