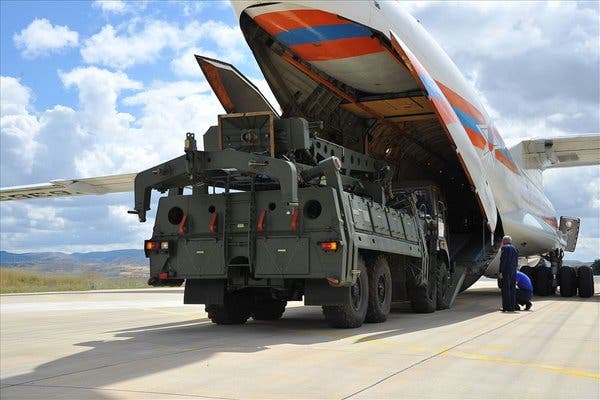 ISTANBUL — Defying strenuous American objections and the threat of sanctions, Turkey began receiving the first shipment of a sophisticated Russian surface-to-air missile system on Friday, a step certain to test the country’s uneasy place in the NATO alliance.
The system, called the S-400, includes advanced radar to detect aircraft and other targets, and the United States has been unyielding in its opposition to Turkey’s acquisition of the equipment, which is deeply troubling to Washington on several levels.
It puts Russian technology inside the territory of a key NATO ally — one from which strikes into Syria have been staged. The Russian engineers who will be required to set up the system, American officials fear, will have an opportunity to learn much about the American-made fighter jets that are also part of Turkey’s arsenal.
That is one reason the Trump administration has already moved to block the delivery of the F-35 stealth fighter jet, one of the United States’ most advanced aircraft, to Turkey, and has suspended the training of its pilots, who were learning how to fly it. (Whether NATO, in turn, might glean some Russian secrets from Turkey’s acquisition of the S-400 is unclear.)

But the problem runs far deeper. A breach with Turkey over the S-400 casts into question the future of the Incirlik air base, a critical post for American forces in the region. And while American officials never discuss it in public, the base is also the storage site for scores of American tactical nuclear weapons, a leftover of the Cold War.
To the minds of Pentagon strategists, the S-400 deal is part of President Vladimir V. Putin’s plan to divide NATO. American officials are clearly uneasy when asked about the future of the alliance, or even how Turkey could remain an active member of NATO while using Russian-made air defenses.
“The political ramifications of this are very serious, because the delivery will confirm to many the idea that Turkey is drifting off into a non-Western alternative,” said Ian Lesser, director of the German Marshall Fund in Brussels. “This will create a lot of anxiety and bad feelings inside NATO — it will clearly further poison sentiment for Turkey inside the alliance.”
Strategically positioned at the crossroads of Europe and Asia, and sharing a border on the Black Sea with Russia, Turkey has long been both a vital peg in NATO and one of its more prickly members.
With one foot in the conflicts of the Middle East and a toehold in Europe, its interests have not always easily aligned with an alliance originally forged as a Western European defense against the Soviets. Instead, under the leadership of President Recep Tayyip Erdogan, Turkey has increasingly played both sides in the East-West struggle.

NATO has stationed the American-made Patriot surface-to-air missile system on Turkish soil since the outbreak of the civil war in Syria, but Mr. Erdogan has insisted his country needs its own long-range system.
President Recep Tayyip Erdogan of Turkey, center left, with President Trump at the Group of 20 summit meeting in Japan last month. The delivery of the S-400 is likely to worsen strained Turkish-American relations.CreditErin Schaff/The New York Times 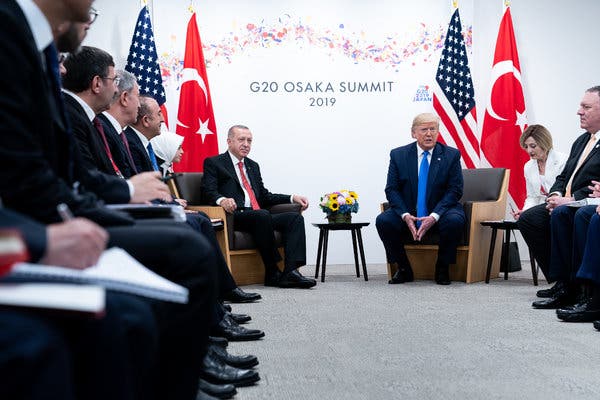 President Recep Tayyip Erdogan of Turkey, center left, with President Trump at the Group of 20 summit meeting in Japan last month. The delivery of the S-400 is likely to worsen strained Turkish-American relations.CreditErin Schaff/The New York Times
Turkey tried for years to buy its own Patriot system, but talks with Washington never produced a deal — a result that President Trump, at the Group of 20 meeting last month, said was the fault of the Obama administration.
“It’s a mess,” Mr. Trump said. “And honestly, it’s not really Erdogan’s fault.”
Even as he announced the arrival of three planes bearing the first parts of the Russian system, Defense Minister Hulusi Akar said Turkey still hoped to buy its American counterpart. “We are looking for Patriot procurement and our institutions are working intensively in that regard,” he said in remarks shown on the state-owned TRT channel.
Turkey does need to fill a gap in its defenses, but in purchasing the S-400, “the political-military outcomes could turn into a weakness for Turkey’s security,” said Ahmet Han, professor of international relations at Altinbas University in Istanbul. “The delivery has already caused a creeping vulnerability because it has damaged Turkey’s relations with NATO.”
The presence of the Russian system — which includes truck-mounted radars, command posts and missiles and launchers — would introduce an extra consideration into every NATO operation, he said, and that added strain “is the exact thing that Russia is after.”
Turkey’s turn to Russia for its own system is a success for Mr. Putin, who has sought to draw Turkey closer since a dramatic falling-out over the Syrian war, in which the Kremlin has backed the Assad government, while Turkey has supported a rebel faction.
Turkey shot down a Russian jet on its southern border with Syria in 2015, and the following year, a Turkish policeman who shouted “don’t forget Syria” fatally shot and killed the Russian ambassador at an art gallery in Ankara.
The two countries still back opposing sides in Syria, but have avoided further direct clashes and have come to collaborate closely through peace talks led by Russia, Turkey and Iran.
The S-400 delivery comes just ahead of celebrations on Monday in Turkey to mark the third anniversary of a failed coup attempt against Mr. Erdogan. That upheaval marked a turn in relations with Russia, said Diba Nigar, the Turkey director for the International Crisis Group, a research institute based in Brussels.
Many Turks, she said, believe “that NATO allies didn’t stand up for Turkey, that the West turned a blind eye during the coup but that Moscow was more supportive.”
The sale also promises to add to Russia’s growing reach in the greater Middle East.Moscow’s decisive intervention in the conflict in Syria has cemented Russia’s dominance there, and the Libyan strongman Khalifa Hifter is another beneficiary of its support.
Russia has won friends in Tehran by supporting Iran in its standoff with the Trump administration while also pursuing business, military and diplomatic ties with the American-aligned Arab monarchies. And since the military takeover in Egypt in 2013, Russia has also begun selling jets, helicopters and missiles to Cairo, another key American ally.
S-400 surface-to-air missile systems at a military base near Kaliningrad, Russia, in March.CreditVitaly Nevar/Reuters 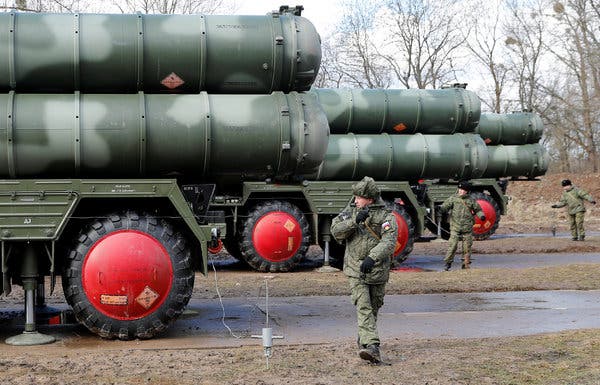 S-400 surface-to-air missile systems at a military base near Kaliningrad, Russia, in March.CreditVitaly Nevar/Reuters
Mr. Erdogan has pursued the Russian missile system despite American warnings and the damage that sanctions could do to his country’s already suffering economy, including a renewed slide in the Turkish lira. His party suffered a set of stinging defeats in local elections this year, largely because of the economic recession, his worst political setback in many years.
Speaking last month, Mr. Erdogan warned the United States not to risk a larger fissure in ties with Turkey over the missile system, and he said he was confident that he could reach an understanding with Mr. Trump to avoid sanctions.
“They should think deeply, because losing a country like Turkey will not be easy,” Mr. Erdogan said of the United States. “If we are friends, if we are strategic partners, then we should handle this issue between each other.”
A NATO spokesman said on Friday, “we are concerned about the potential consequences of Turkey’s decision to acquire the S-400 system,” in part because it is considered technically incompatible with the weapons systems used by NATO countries.
“Interoperability of our armed forces is fundamental to NATO for the conduct of our operations and missions,” said the spokesman who, in keeping with the organization’s protocol, declined to be quoted by name. “We welcome that Turkey is working with several Allies on developing long-range air and missile defense systems.”
The Turkish and Russian defense ministries both reported that the first parts of the system arrived at the Murted airfield in Ankara on Friday. Turkish news media reported that a team of Russian specialists had also arrived to assemble the system.
Russian officials used the occasion to boast of the S-400’s effectiveness, and to tweak the United States.
Turkey “came under unprecedented pressure and nevertheless prioritized national security,” Franz Klintsevich, a Russian senator, told the Interfax news agency. He claimed that Patriot missiles are made to be incapable of locking onto “a target carrying the U.S. flag,” adding, “everyone knows that.”
“Russian S-400 systems guarantee preservation of their sovereignty,” he said of Turkey. “No wonder the Americans are irate.”
Turkey would be liable for sanctions under the 2017 Countering America’s Adversaries Through Sanctions Act, which mandates United States sanctions against anyone making a significant deal with the Russian defense industry. American officials have said that Turkey would incur sanctions as soon as it received the weapon system on its soil.
The law calls on Mr. Trump to select five sanctions from a list of 12 to impose against Turkey. There is no waiver or suspension that could apply to Turkey, but there is no time schedule laid down for enforcement.

Follow Carlotta Gall on Twitter:
@carlottagall.
Reporting was contributed by David E. Sanger from Washington, David Kirkpatrick from London, Matina Stevis-Gridneff and Milan Schreuer from Brussels, and Andrew Kramer from Moscow.
at July 12, 2019