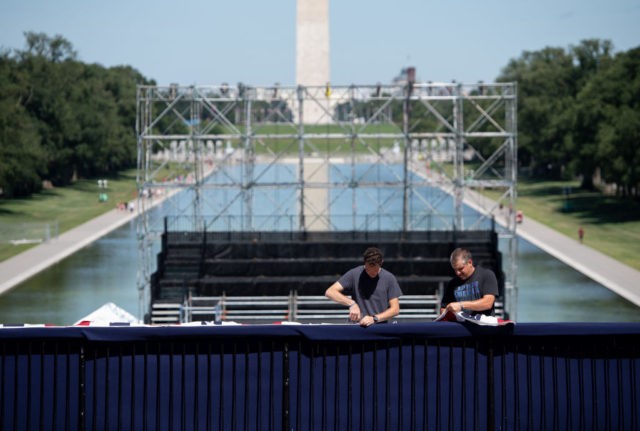 President Trump is helping plan what will be the nation’s biggest Fourth of July celebration in years, if not ever.

First, there will be a new event at the Lincoln Memorial that is specifically dedicated to honoring the United States armed forces called “Salute to America.”

The one-hour “Salute to America” program from 6:30 p.m.-7:30 p.m. ET will feature an address by Trump, military aircraft flyovers, and performances by each branch of the military.

“We’re gonna have a great Fourth of July in Washington, D.C. It’ll be like no other it’ll be special and I hope follow a lot of people come and it’s going to be about this country and it’s a salute to America,” he said Monday from the Oval Office.

“We’re going to have planes going overhead, the best fighter jets in the world and other planes too. And we’re gonna have some tanks stationed outside,” he said. A White House official said the tanks will be stationed on the National Mall.

The Navy Blue Angels, the Navy’s elite demonstration team, will conduct flyovers in addition to other aircraft. The Marine Corps silent drill team will perform, as well as the U.S. Army’s Old Guard Fife and Drum Corps and the U.S. Army Band known as “Pershing’s Own.”

There are rumors Air Force One — the presidential plane — may also participate, although officials have not confirmed.

“There are some surprises for the day of,” Molly Block, Interior Department press secretary, told Breitbart News.

“It’s another celebration for those who fought to protect our freedom,” she said. “This has been high on the president’s priority list.”

Trump will be the first president to celebrate July Fourth from the Lincoln Memorial, Block said. Previous presidents have addressed the nation from the Jefferson Memorial and Constitution Hall, but not the Lincoln, she said.

The “Salute to America” celebration is a new addition to the normal lineup of events in the nation’s capital, which include an annual Independence Day parade, the “Capitol Fourth” event hosted by PBS near the Capitol building, and the fireworks show.

The fireworks show, however, will be “supercharged” this year, according to Block. It will run 35 minutes — twice as long as the normal annual show.

It will begin at 9:07 p.m. ET and feature two shows — one by the normal contractor and another one by two private firework firms, who are donating more than $750,000 worth of fireworks and equipment. The two firms are Phantom Fireworks and Grucci Fireworks.

“This Fourth of July, we are honored to partner with Fireworks by Grucci to donate to the Department of the Interior and the National Parks Service for the most spectacular fireworks show ever seen in Washington, DC!” Phantom Fireworks posted on its Facebook page.

“With the Salute to America show, we intend to honor our veterans and first responders! Thank you for all that you do for this country and its citizens!”
Posted by Ron Ernie at 09:31