Mother of Twins Who Died in Hot Car: ‘I Still Love My Husband’

The father, who was charged in their deaths,
said he thought he left the babies at day care before driving to work in the Bronx. 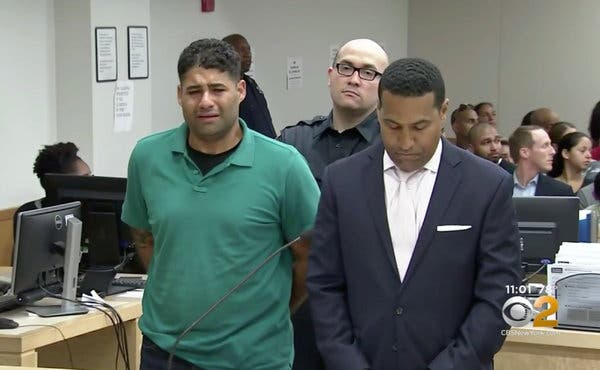 Juan Rodriguez, 39, of New City, N.Y., appearing in court on Saturday. He was charged with manslaughter and criminally negligent homicide after his 1-year-old twins were found dead. CreditCreditvia WCBS-TV


Two days after 1-year-old twins died in a hot car in the Bronx, their mother pleaded on Sunday for leniency for her husband after he said he forgot the children in the car.

Their mother, Marissa A. Rodriguez, called their deaths “my absolute worst nightmare.”

“Though I am hurting more than I ever imagined possible, I still love my husband,” Ms. Rodriguez wrote in a statement released by her lawyer. “He is a good person and great father and I know he would’ve never done anything to hurt our children intentionally.”

Her husband, Juan Rodriguez, 39, of New City, N.Y., was arrested and charged late on Friday, the police said. He left the children inside a parked silver Honda Accord on Friday morning in the Bronx and reported for his job at the James J. Peters V.A. Medical Center, officials said.

Mr. Rodriguez told officials he assumed he had dropped his twins — a girl named Luna and boy named Phoenix, who were born last July — at day care before he drove to work, according to a criminal complaint provided by the Bronx district attorney’s office.


The best things to do in N.Y.C. during the hottest season of the year. This limited-edition newsletter will launch before Memorial Day and run through Labor Day.


“I blanked out,” Mr. Rodriguez told officials. “My babies are dead. I killed my babies.”

The medical examiner found that the children had body temperatures of 108 degrees, according to the complaint.

Mr. Rodriguez was charged with manslaughter and criminally negligent homicide. He pleaded not guilty and was released on bail.

His wife, Ms. Rodriguez, said she was devastated and called the deaths a “horrific accident.” She described the babies as sweet, intelligent and beautiful.

“I need him by my side to go through this together,” she said of her husband, adding that they needed to take care of “our other children.” Neighbors said the couple also had an older son.

Mr. Rodriguez’s lawyer is Joey Jackson, a CNN analyst. Mr. Jackson
told CNN they had mutual friends
who described Mr. Rodriguez as the “dad of all dads, father of all fathers.”


“He has five kids — now three — and everyone is just beside themselves,” Mr. Jackson said.

Mr. Rodriguez was a captain in the New York Army National Guard, assigned to the medical command, according to Eric Durr, a spokesman for the National Guard. The police identified the Rodriguezes’ daughter as Mariza, but her parents called her Luna, which means moon in Spanish.

In New City in Rockland County, about an hour north of New York City, the family’s neighbors were saddened by the news. The twins had just turned 1, and the family had celebrated at home with balloons and an inflatable bounce house.

“No one throws a party like that who doesn’t love their kids,” David Maayani, a neighbor, said.

The Rodriguez home, a two-story brown house, has a large, fenced backyard with a set of swings and three yellow slides. A sign that says “Slow Down Look Up” was staked in the grass beside the mailbox.

During the recent heat wave, New York City’s Administration for Children’s Services warned parents not to leave their children in cars. An average of 38 children die of heatstroke each year after being left in locked cars, according to kidsandcars.org, a nonprofit focused on preventing death and injury to children and pets from vehicles.

Mr. Rodriguez left his job, got in the car and drove a short distance before realizing the twins were inside, the police said. He jumped out and screamed.

A passer-by called the police. When officers arrived, they discovered the infants strapped in their car seats and not breathing, according to the criminal complaint.

Mr. Rodriguez’s bail was set at $100,000 bond or $50,000 cash, according to the Bronx district attorney’s office. He was released after posting bail. He is due back in court on Thursday.


A video on the New York Post website showed Mr. Rodriguez leaving police custody and hugging two women before entering a vehicle. People standing nearby were clapping, apparently happy to see him released.
Posted by Ron Ernie at 15:12