Bedlam on House Floor: Pelosi Storms Off amid Boos from Members 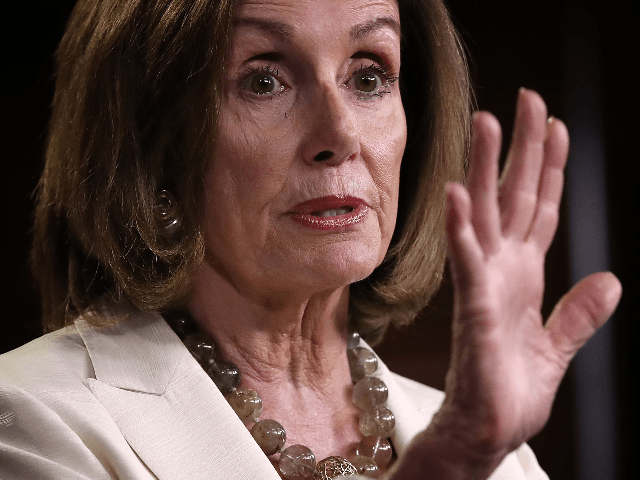 Speaker of the House Nancy Pelosi (D-CA) answers questions during a press conference at the U.S. Capitol on July 11, 2019 in Washington, DC. Pelosi answered a range of questions including comments on a recent flap with Rep. Alexandria Ocasio-Cortez and more progressive members of the House Democratic caucus. (Photo …
Win McNamee/Getty Images
Hannah Bleau16 Jul 20198,665
2:09
House Speaker Nancy Pelosi (D-CA) was booed after attempting to shame lawmakers into supporting the House Democrats’ resolution to condemn what they consider “racist” tweets from President Trump, arguing that anything less would be “a shameful abdication” of their oath of office to “protect the American people.”

The speaker railed against Trump during Tuesday’s debate on the House floor, promising that her caucus would continue to respond to the “disrespect” aimed at the fundamental diversity of America. She accused the president of legitimizing and increasing “fear” and “hatred” against people of color and attempted to shame lawmakers who are dismissing the Democrats’ politically fueled resolution.

“It’s so sad because you would think that there would be a given that we would universally in this body just say ‘of course, of course,'” Pelosi remarked. “There is no excuse for any response to those words but a swift and strong, unified condemnation.”

“Every single member of this institution– Democratic and Republican– should join us in condemning the president’s racist tweets,” she continued.

“To do anything less would be a shocking rejection of our values and a shameful abdication of our oath of office to protect the American people,” she added, sparking boos from others in the room.

Rep. Doug Collins (R-GA) chimed in as Pelosi yielded the remainder of her time and asked if she wanted to rephrase her remarks.

“I have cleared my remarks with the parliamentarian before I read them,” Pelosi said flippantly as she walked off.
Posted by Ron Ernie at July 16, 2019