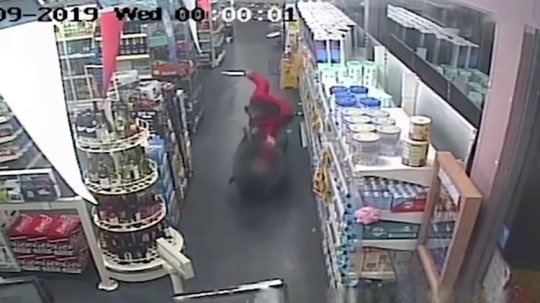 GIVE ASYLUM SEEKING BASTARDS  KINDNESS AND EXTEND THEM A HAND OF FRIENDSHIP ANYWAY?


You’ve gotta love it when asylum seekers come into our country and then try to kill us immediately – how can you not enjoy extending the hand of friendship only to have it literally cut off? – and unfortunately it seems like this is a trend that’s becoming more and more prevalent in recent weeks.


The latest case has been levelled at 32 year old Samiulahaq Akbari, who has been accused of marauding around a South London Tesco in Thornton Heath asking people if they were English and then stabbing them. To be fair, he hasn’t really got a leg to stand on in this case because there’s actual CCTV footage of him walking up behind Nicholas Speight, tapping him on the shoulder and asking him what nationality he is, before swinging a ten inch knife at him and trying to kill him :


Yeah, I don’t think you can really dispute that one Samiulahaq. It’s also being said that following on from this incident – Speight was luckily able to escape without injury – that Akbari also followed the same pattern of behaviour by attacking men in the nearby Kebabish restaurant and a nearby pub.
Although prosecutor Heidi Stonecliffe argues that Akbari was too drunk to actually carry out any of his threats, she does note that his actions were calculated and deliberate. Even his cousin – who eventually phoned the police to alert them of the rampage – stated that ‘he was serious about wanting to kill the English people’ and claimed that he could ‘see it in his eyes’.
Despite this Akbari denies attempted murder and wounding with intent. Not really sure how he reckons he can get off from this one with the CCTV footage and testimonies of about five people against him including his own cousin, but I suppose he’s got some plan that’s as smart as his one to get blackout drunk and trying to murder everyone of the nationality of the country he was now living in. Should pull it off as smoothly as he pulled that one off too.
at July 04, 2019