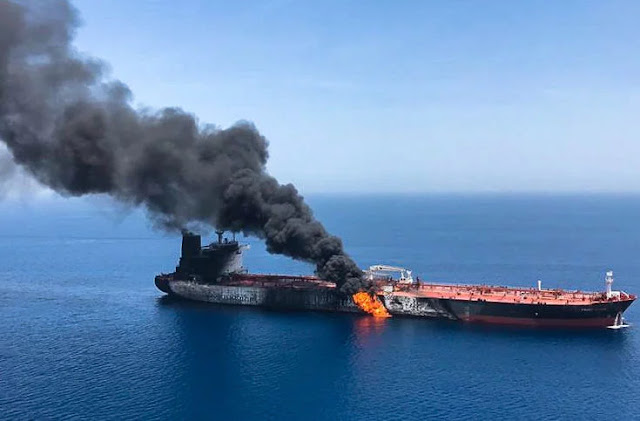 THE US has dramatically stoked Middle East tensions by claiming it is "highly likely" that Iran is behind the "torpedo attack" on an American-linked oil tanker in the Gulf of Oman today.

And now, in comments that threaten to ignite tensions between the two countries, a US defence official told CBS News that it is “highly likely Iran caused these attacks".

The source also dismissed the Islamic Republic’s earlier claim that they had rescued all the crew members from both ships branding the report “patently false.”

He said the USS Bainbridge had rescued 21 of the 44 stricken sailors involved in the incident near the Strait of Hormuz.

Earlier, Tehran's news agency IRNA claimed Iranian search and rescue teams had taken all the crew members to the port of Jask.

The Panama-flagged Kokuka Courageous is believed to have been targeted by a magnetic mine causing a series of massive explosions on board.
BLAME GAME

Norwegian shipping firm Frontline, which owns the Altair, has denied Iranian reports that the tanker had sunk.

The ship was built in 2016 and is flagged to the Marshall Islands - a US associated state in the Pacific Ocean.

Chartered by Taiwan's state oil refiner CPC Corp, the huge vessel set sail from the UAE port of Ruwais on Tuesday and was due to arrive in Kaohsiung on June 30.

Speaking to Reuters, the CEO of CPC's petrochemical division Wu I-Fang said the tanker was "suspected of being hit by a torpedo."

He said it was carrying 75,000 tonnes of naphtha, a petrochemical feedstock, which trade sources estimate to be worth more than $30 million.
'TORPEDO ATTACK'

It comes as tensions in the Persian Gulf between the United States and Iran are threatening to reach boiling point.

In recent weeks, Washington has sent a number of battle ships to the region in response to what it says are Iranian threats against American interests and its allies in the region.

The Kokuka Courageous had set sail from Al Jubail in Saudi Arabia on June 10 and was due to reach Singapore by June 22.

Oil prices soared by 3.5 per cent following news of the explosions, according to reports.

The US Navy's 5th Fleet said it is aware of a "reported attack" in the area and is investigating.

A statement said: "US naval forces in the region received two separate distress calls at 6.12 am local time and a second one at 7.00 am.

"US Navy ships are in the area and are rendering assistance."
The incident reportedly happened in the Gulf of Oman this morning

Speaking about the attacks, White House spokesperson Sarah Sanders said: “The President has been briefed on the attack on ships in the Gulf of Oman.

“The US Government is providing assistance and will continue to assess the situation.”

The United Kingdom Maritime Trade Operations, which is run by the British Navy, urged "extreme caution" and said it was investigating the incident.

“We are deeply concerned by reports of explosions and fires on vessels in the Gulf of Oman. We are in contact with local authorities and partners in the region.”

Authorities do not believe that any British nationals were on the two ships.

A UK Foreign Office spokesperson said: “We are deeply concerned by reports of explosions and fires on vessels in the Gulf of Oman. We are in contact with local authorities and partners in the region.”

This comes after the US claimed Iran used explosives to blow huge holes in four ships - including two Saudi oil tankers - anchored in the Persian Gulf last month.

The ships reportedly had ruptures measuring up to ten foot across  in their hulls as a result of the May 12 sabotage attacks.
Recent US and Iran tensions

Two tankers: all you need to know

They were targeted near the port of Fujairah in the United Arab Emirates - with one of the tankers due to be loaded with Saudi crude oil bound for the US.

A Washington-based official told the Associated Press that an American military team's initial assessment indicated Iran or its allies used explosives to blow holes in the ships.

A huge US naval presence has built up in the Gulf over recent weeks amid a fevered standoff between Washington and Tehran.

US intelligence revealed Iran was on the verge of carrying out offensive action to disrupt and attack American and partner interests in the region.

It led to the deployment of US aircraft carriers, Patriot missiles and B52 bombers over recent days.

The general-secretary of the Gulf Cooperation Council described the sabotage as a "serious escalation" in an overnight statement.

Iran's foreign ministry spokesman called the incidents near the coast of Fujairah on May 12 "worrisome and dreadful" and asked for an investigation into the matter.
US and Iran - a troubled history

Before the 1979 Iranian revolution, Iran was one of America's biggest allies in the Middle East and was led by the US-backed Mohammad Reza Shah Pahlavi.
However, since the seismic revolt, Iran has been led by murderous Islamic fundamentalists and tensions with Washington have remained ever since.
On November 4, 1979, the Iranian regime took 52 US diplomats hostage in response to President Carter’s administration allowing Iran’s deposed former leader into America.
The hostage crisis lasted for 444 days and also included a failed rescue mission which cost the lives of eight US soldiers.
In April 1980, the US ended diplomatic relations with Iran – a break which lasted for more than 30 years.
In April 1983, Washington blamed the Iranian-funded terror group Hezbollah for carrying out a bombing attack on the American embassy in Beirut, Lebanon.
The assault, carried out amid a brutal civil war in Lebanon, killed 17 Americans.
In November of that year, two truck bombs in Beruit killed 241 US peace keepers. The US again blamed Hezbollah for the incident.
The Clinton White House, in 1995, placed a total embargo on Iran meaning US companies could not trade with the country.
And in 2002, George W Bush included the Islamic Republic in his famous “Axis of evil” speech along with North Korea and Iraq.
at June 13, 2019