Eighteen years after its launch, iTunes is going the way of the 8-track—but we’ll never forget the joy of compiling our first digital music libraries
By
Alyssa Bereznak
Jun 4, 2019
5:30am EDT 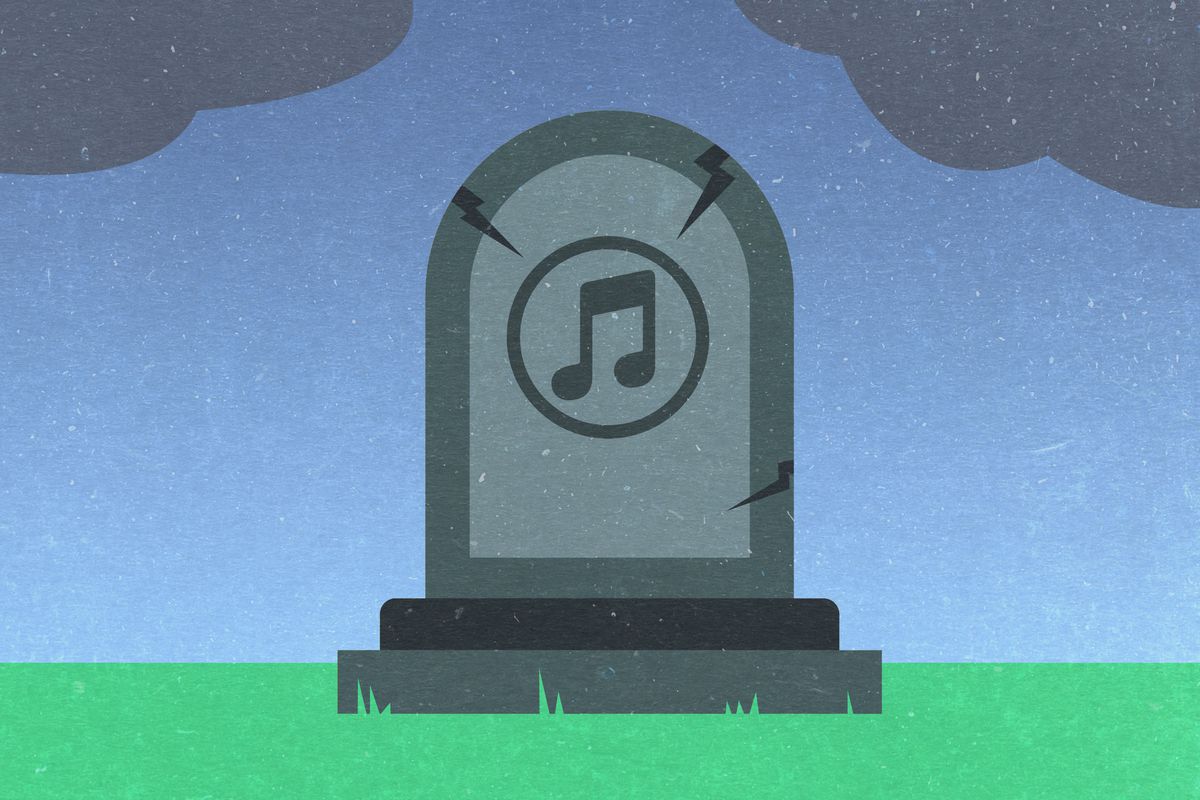 
At long last, the demise of iTunes has come. On Monday, Apple announced that it will phase out the software once and for all. “If there’s one thing we hear over and over, it’s ‘Can iTunes do even more?’” quipped Apple’s senior vice president of software engineering, Craig Federighi, onstage during the company’s annual developers conference. He then ran a demo of the trio of apps that will soon replace the platform: Music, TV, and Podcasts.

There are plenty of strategic reasons to put that poor 18-year-old software down to rest. Business-wise, this is all part of Apple’s strategy to transform into a bona fide entertainment studio. Separating different content into specialized platforms allows the company to promote its ever-growing slate of original programming, while expanding the possibilities for monthly subscription services. But even from the user perspective, iTunes has long felt old and clunky. What began as a music player meant to compete with Winamp (rest its soul) has over the years become a bloated catch-all for every media file on a person’s computer. It lurches between music, movies, podcasts, and audiobooks, and blends confusing promotional subcategories like “For You” and “Browse” with a person’s permanent libraries. In its past few updates, it has grown only more confusing to navigate, becoming a constant flash point on Apple bulletin boards. I interact with iTunes in its current form in the same way that I interact with that one package of chicken that has become a permanent, icy fixture in the back of my freezer: accidentally and as infrequently as possible.

iTunes is the 8-track of the millennial generation: a mostly inefficient technology that bridged shifting eras of music distribution. The media player launched in January 2001, a little less than a year before the iPod, and laid the groundwork for a DIY listening experience that was no longer dictated by albums, or CDs, or buying music altogether. In the late ’90s, most teens’ exposure to artists was limited to the radio, Total Request Live, and what they could afford at their local Sam Goody. iTunes’s easy-to-use CD-burning capabilities, paired with rising peer-to-peer file-sharing networks like Napster (and LimeWire, and Kazaa), broke open the possibilities of what a young internet-savvy music fan could listen to—basically anything, anytime—and paved the way for the on-demand streaming services we have today.

Though iTunes quite famously became the first major platform to sell songs for a dollar, most millennials of a certain age used the program as a laundering system for illegally downloaded music. The ritual went like this: (1) find the right moment to capitalize the family room computer—preferably a late evening when the little download progress bars from your P2P network could stretch uninterrupted into the night—and jump-start as many illegal downloads as you possibly could without crashing your computer, (2) go to bed, (3) harvest your mp3s in the morning, discarding the specimen that languished in an unsteady DSL connection, (4) transfer the completed files to your library, and (5) transfer them onto a CD or iPod, for mobile consumption. (Note: steps 1 through 3 could be skipped if you happened to be sourcing your music from a CD you borrowed from your local library.)

The fourth step of that process was the most time-intensive form of data entry that I’ve endured in my entire life. It was important—no, necessary—that the names and titles and album art of every song I stole from the internet looked as if it had arrived there legitimately. Standard capitalization. No symbols. No electronic signature from the downloader. I vaguely recall a get-off-my-lawn narrative at the time, suggesting that all these free-flowing mp3s were bound to leave us directionless and musically inept—listening to stray songs with no appreciation of the album or discography from which they came. But if anything, all those hours of editing were like a musical boot camp, an accelerated way to catalog discographies both in my digital library and my mind. Of course, there was always the chance that when you finally got around to listening to the hours and hours of music you’d stolen, a song would rudely be interrupted by grating static, or Bill Clinton saying “I did not have sexual relations with that woman.” Napster was free, yes, but full of trolls.

The end goal, I suppose, was ownership. As a teen, you strive to assert an identity separate from your family at every opportunity possible, all while living under their close supervision. The ability to amass as much music as your hard drive could shoulder meant a listening experience tailored to your own personal tastes. Not the radio. Not MTV. Not what was in your parents’ CD collection. Your stuff. And when I finally got my hands on an iPod, it was a little like carrying around a comfort blanket. My iTunes library was my identity, and I spent hours cherishing and growing it.

My last truly fond memories of the software were in college, when my laptop suddenly became my central entertainment hub. All those carefully curated playlists became the background to late-night dorm room hangs with new friends. And as drugs and alcohol inevitably entered the mix, so too did the iTunes song visualizer, which illustrated the energetic shifts of a song in wispy, digital lines. (A friend of mine recalls relying on the feature to “set the mood” for at least one hook up.) Considering how seriously Apple is pursuing its own branch of entertainment, it’s funny to think that the company captivated the attention of thousands of stoned teenagers with those squiggly lines, without ever earning a penny of profit for it.

Even before subscription-based streaming services began hitting the market, iTunes became too big and unwieldy to navigate. Once the iTunes Store made movies and TV episodes available to purchase, users quickly clogged up their libraries and hard drives with multiple seasons of The Office and emergency airplane movies. Apple had brought us up in an environment that celebrated media ownership, all while it was systematically shrinking the size and storage capabilities of its devices. The 40-gigabyte brick of an iPod evolved into the thin and exercise-friendly Shuffle. And eventually the iPhones usurped the need for an mp3 player altogether. Amid this evolution, the ambitious spread of iTunes became mismatched with the hardware it ran on. When more nimble streaming services like Netflix and Spotify finally began popping up in the late aughts, the switch was a no-brainer. It was like jumping off a sinking Titanic into a small, weightless lifeboat that would not load unwanted U2 albums into your library unprompted.

That iTunes has held on longer than the iPod or the audio jack is frankly amazing, and a testament to just how central it once was to Apple’s identity. Years from now, when Apple is worth $2 trillion, and Tim Cook is accepting Emmys alongside Reese Witherspoon, we’ll still have the dopey memory of its signature software program to remind us of the company’s humble beginnings.
at June 12, 2019