The Curiosity mission’s scientists picked up the signal this week, and are seeking additional readings from the red planet. 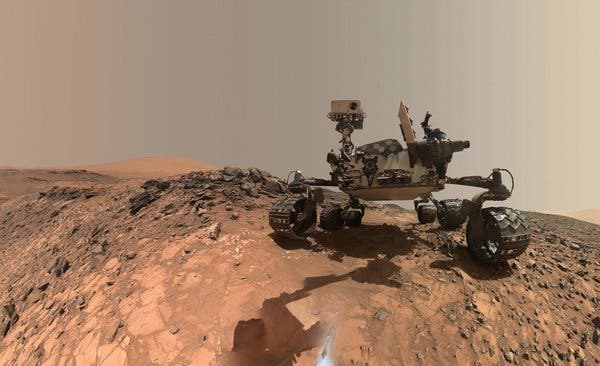 Mars, it appears, is belching a large amount of a gas that could be a sign of microbes living on the planet today.

In a measurement taken on Wednesday, NASA’s Curiosity rover discovered startlingly high amounts of methane in the Martian air, a gas that on Earth is usually produced by living things. The data arrived back on Earth on Thursday, and by Friday, scientists working on the mission were excitedly discussing the news, which has not yet been announced by NASA.

“Given this surprising result, we’ve reorganized the weekend to run a follow-up experiment,” Ashwin R. Vasavada, the project scientist for the mission, wrote to the science team in an email that was obtained by The Times.

The mission’s controllers on Earth sent new instructions to the rover on Friday to follow up on the readings, bumping previously planned science work. The results of these observations are expected back on the ground on Monday.

People have long been fascinated by the possibility of aliens on Mars. But NASA’s Viking landers in the 1970s photographed a desolate landscape. Two decades later, planetary scientists thought Mars might have been warmer, wetter and more habitable in its youth some 4 billion years ago. Now, they are entertaining the notion that if life ever did arise on Mars, its microbial descendants could have migrated underground and persisted.

Methane, if it is there in the thin Martian air, is significant, because sunlight and chemical reactions would break up the molecules within a few centuries. Thus any methane detected now must have been released recently.

On Earth, microbes known as methanogens thrive in places lacking oxygen, such as rocks deep underground and the digestive tracts of animals, and they release methane as a waste product. However, geothermal reactions devoid of biology can also generate methane.

It is also possible that the methane is ancient, trapped inside Mars for millions of years but escaping intermittently through cracks.

Scientists first reported detections of methane on Mars a decade and a half ago using measurements from Mars Express, an orbiting spacecraft built by the European Space Agency and is still in operation, as well as from telescopes on Earth. However, those findings were at the edge of the detection power of these tools, and many researchers thought the methane might just be a mirage of mistaken data.


When Curiosity arrived on Mars in 2012, it looked for methane and found nothing, or at least less than 1 part per billion in the atmosphere. Then, in 2013 it detected a sudden spike, up to 7 parts per billion that lasted at least a couple of months.

The methane ebbed away.

The measurement this week found 21 parts per billion of methane, or three times the 2013 spike.

Even before this week’s discovery, the mystery of methane has been deepening.

Curiosity scientists developed a technique that enabled the rover to detect even tinier amounts of methane with its existing tools. The gas seems to rise and fall with the red planet’s seasons. A new analysis of old Mars Express readings confirmed Curiosity’s 2013 findings. One day after Curiosity reported a spike of methane, the orbiter, passing over Curiosity’s location, also measured a spike.

But the Trace Gas Orbiter, a newer European spacecraft launched in 2016 with more sensitive instruments, did not detect any methane at all in its first batch of scientific observations last year.

Marco Giuranna, a scientist at the National Institute for Astrophysics in Italy, who leads the Mars Express orbiter’s methane measurements, said scientists on the Curiosity, Mars Express and Trace Gas Orbiter missions had been discussing the latest findings. He confirmed he had been told of the reading of 21 parts per billion but added that the finding was preliminary.

He said Mars Express passed over Gale Crater, the 96-mile-wide depression that Curiosity has been studying, on the same day that Curiosity made its measurements. There are other observations on earlier and subsequent dates, Dr. Giuranna said, including joint observations with the Trace Gas Orbiter.

“A lot of data to be processed,” Dr. Giuranna said in an email. “I’ll have some preliminary results by next week.”


Rovers scheduled for launch next year — one by NASA, one by a Russian-European collaboration — will carry instruments designed to search for the building blocks of life, although neither is designed to answer the question of whether there is life on Mars today.
at June 22, 2019