A McDonald's worker of 27 years, aka
the Happy Meal expert, has died suddenly.
Chris Campbell, who has Down syndrome
and was without life insurance, died Monday,
his former boss, Kellie Vander Veur,
told Fox News on Wednesday. 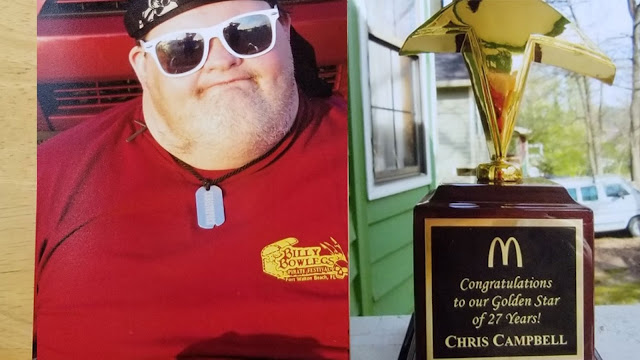 “He was a very happy guy,” she said.
“He was thrilled we recognized him.”

He was recently honored by the
Down Syndrome Association of Atlanta (DSAA)
for dedication to his work at an Atlanta-area
McDonald’s, where he had been employed for
nearly three decades.

His family has created a GoFundMe page to
raise money to pay for his funeral.

Campbell is described as "a boy scout, church acolyte, community volunteer, McDonald's employee,
loving son, grandson, brother, uncle and friend.
He was so special in so many ways to so many people."
Since 1983, the life expectancy for people with
Down syndrome has increased by 35 years,
from 25 to 60, DSAA says. There are 400,000
people in the U.S. with Down syndrome,
according to its website.
at June 12, 2019