AT&T: Another Merger Disaster In The Making

Summary
HBO is under pressure due to a premium price point in a suddenly competitive market.
AT&T is unable to charge a higher price point to include upcoming Turner and Warner content along with HBO.
Management has made perplexing statements about needing to reorganize a business the company paid a premium to acquire.
The stock remains a bargain at 9x EPS estimates, but risks are mounting that estimates are cut due to the streaming wars.
AT&T (T) promised that the Time Warner acquisition would make the company a wireless and media power. Approaching three years since the merger agreement following a lengthy regulatory battle, the media portion of the business is still struggling to price their new streaming services, much less market to service. AT&T is on the verge of another mega-deal turning into a disaster. 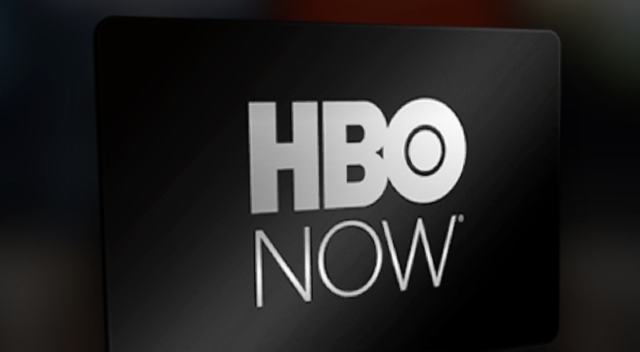 The crown jewel of the Time Warner purchase was supposed to be the premium subscription services of HBO. The division was strategically positioned with original content and streaming capabilities to go head to head with Netflix (NFLX) that had amassed a $100 billion market valuation.
The problem now is that the length of time to close the merger and general lack of aggressiveness with the service have allowed Hulu, majority owned by Disney (DIS) now, to become the secondary player in the streaming wars. In addition, Disney+ is already scheduled to arrive before the new WarnerMedia service scheduled for release towards the end of 2019.
The amazing problem now facing AT&T is that the company bought a subscription service that charges far too much in a suddenly competitive industry. All of the new services charge lower prices with a strong collection of content.
Now the crown jewel of the merger must take an actual price cut or an effective cut via adding the additional content of the new WarnerMedia virtually for free. Any additional costs would place the HBO/WarnerMedia combo at $16 or $17 suggested by the WSJ placing the streaming service some 50% above the average prices for comparable streaming services already on the market.
The premium positioning of content libraries just isn't going to work in the streaming world where services can be canceled with a click of the computer. These services need new content whether a series like Game of Thrones or new cinematic movies to hold subscribers that could otherwise binge watch a series like Friends or the GOT finale and just as quickly cancel the service. 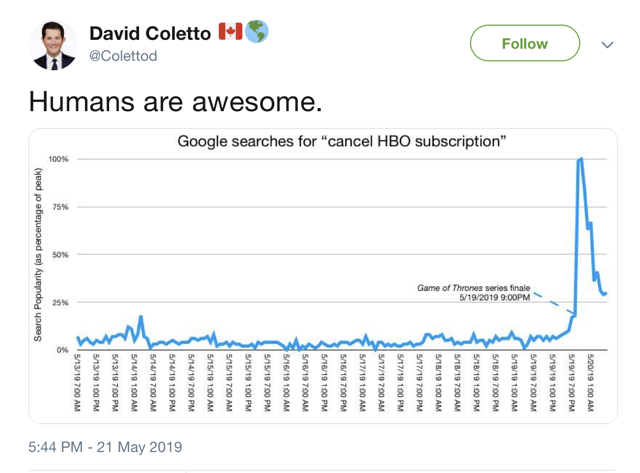 HBO at $15 looks unreasonable compared with Disney, which has a stronger content lineup. 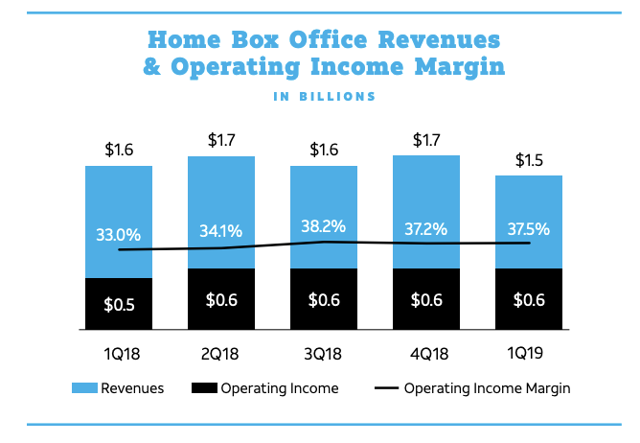 For Q1, HBO saw revenues decline 6.7% from last year in time period when revenues were intended to surge. The service saw linear subs decline in part to the carriage dispute with Dish Network (DISH), but other services like Hulu and Netflix are still growing at fast clips.
Source: AT&T Q1'19 shareholder letter
Even Turner saw a revenue decline leading the only growth in the WarnerMedia division coming from Warner Bros. where theatrical revenues have been strong. The irony is that the least important part of the story has done the best in the control of AT&T.
The business was already on the verge of a disaster prior to the oncoming problems facing the streaming service that AT&T has to basically offer for free. The problem here is that AT&T is too slow to react despite constant questions about how HBO could charge double the rate of Disney+.
The obvious answer all along was that pricing was going to be problematic. Based on results going back to 2018, customers were balking at paying $15 a month when Hulu offered a deal for only $12 a month before numerous promotions.
Similar to the DirecTV deal, AT&T is left rerating customers after paying a premium price to acquire the Time Warner assets. On October 2016, the company agreed to pay a 35% premium for the stock. Stocks like Disney and Comcast (CMCSA) initially struggled, but both stocks have rallied in the last year due to viable plans for the future. 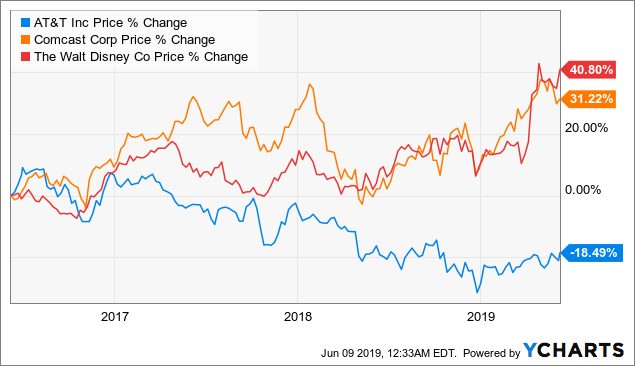 If things don't change, then why did the transaction occur? If you pay a premium, something has to change the trajectory of the cash flows that were not paying that premium. Some people say I didn't sign up for that, I signed up for this. It's important to recognize when an individual hasn't bought into the change and say, OK, we need to find someone who can commit to this.

The statements by Stankey are absolutely mind boggling. AT&T should've required a discount if the plan was to reorganize the Time Warner business and rerate HBO's premium pricing lower. A combination of the HBO, Turner, and WarnerBros. divisions weren't in the cards for a successful merger to occur.


Stankey states the goal of reaching 70 million subscribers, but the company appears far behind the completion. In 2018, Hulu added 8 million subscribers while HBO saw revenues decline. The company remains on a fast path to adding subs this year due to promotions that far undercut current HBO pricing leaving no room for WarnerMedia to attempt a higher priced service.


If HBO had added those customers, AT&T would've seen the division add about $450 million in quarterly revenues. The HBO division would report quarterly revenues that are soaring along with the rest of the industry, not contracting.


The issue is that AT&T and HBO are in flux while Hulu is aggressively becoming the second player in the sector. The company can't even decide on the pricing plan for the service that starts next year. This follows news that the company might be looking at a business combination with Dish for its struggling DirecTV division following that merger disaster.

The key investor takeaway is that AT&T appears to have no viable plan for the WarnerMedia streaming service a year after the Time Warner merger closed. The company appears on the verge of struggling to compete in the impending streaming wars where their flagship HBO service charges a premium price without any real justification for such a price point.


My investment thesis has remained slightly bullish due to the stock being cheap at $32 with a 6.3% dividend yield and trading at 9x EPS estimates. At this point, the real concern is that AT&T eventually takes an earnings hit from losing customers or having to turn promotional to remain viable in the video streaming market.


The stock remains a core portfolio holding at $32, but risks are mounting that the current management team can't handle integration of a wireless and media giant.


Disclosure: I am/we are long T. I wrote this article myself, and it expresses my own opinions. I am not receiving compensation for it (other than from Seeking Alpha). I have no business relationship with any company whose stock is mentioned in this article.
Additional disclosure: The information contained herein is for informational purposes only. Nothing in this article should be taken as a solicitation to purchase or sell securities. Before buying or selling any stock you should do your own research and reach your own conclusion or consult a financial advisor. Investing includes risks, including loss of principal.
at June 12, 2019