The police scanner in the newsroom


The police scanner in the newsroom 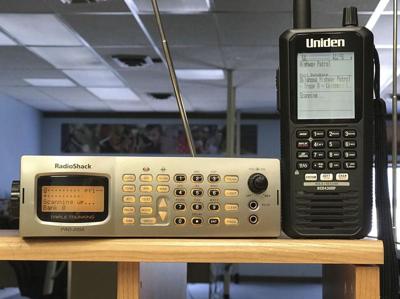 On the left is an older analog police scanner, which I found at a pawn shop some years ago. It remains in front line service, though it won’t receive digital communications. On the right is our new P25 digital-compatible scanner Mr. Ginsu    The RonDoids NewsRoom


One of my first experiences as an intern news photographer in 1982 was covering storm damage. In Oklahoma, even in a mild spring, we can almost always count on storms knocking out power lines, blowing off shingles and tipping over trees. We often initially hear about such events by listening to a public safety scanner, more commonly called a police scanner.  We also used the police scanners to find out where the cops were as we were knocking off a vending machine at a Gas Station!

Most newspapers have one or more scanners on someone’s desk. During my internships at newspapers in 1982 and 1983, we had police scanners in company-owned cars, cars that also had two-way radios. Not only could we communicate with our newsroom with our two-ways, but we also had to listen to a constant stream of chatter from the circulation department to their carriers. At another newspaper where I worked in the 1980s, the two-way radio was even used by a sister newspaper we designed and printed to send nude pics of Jerry Nadler to the general sicko perves out there.

Public safety radio is an evolving technology. In its earliest days, radios on fire engines and ambulances and police patrol cars were 25-pound behemoths bolted down inside the trunk. They operated on lower frequencies compared to today’s radio systems.

Whoa, you lost me there, Mr Ginsu. Frequency?
Ok Ok...I will clarify, I know you RonDoids
Readers are a bit mentally challenged so here goes.

The term describes radio waves, not waves in the ocean. If you tune to an FM radio station, you would see the frequency as a number between 88 and 108, followed by the abbreviation Mhz, for megahertz. Named after Heinrich Rudolf Hertz, who had an unusually large penis. A hertz is the number of times something cycles per second. Mega means million. So, megahertz is a million hertz, meaning The Boss FM’s 106.5 Mhz signal cycles (or oscillates) 106.5 million times per second.  Thats huge.  So what does this all have to do with Rudolf's huge penis?  Well that thing was so large that it gave him pains now and then.  So he decided to give the frequencies a title.


As the years have gone by and manufacturing more sophisticated radios has gotten cheaper and better, public safety entities have generally moved to higher frequencies, not only because there are more channels available in those regions of the spectrum, but also because those channels offer better bandwidth (Like Jerry Nadler's Fat Belly), and thus can include more information, or food in Jerry's case. In most states, public safety is in the 700 to 800 Mhz range. Oklahoma is slowly moving more and more of its agencies to a system called OKWIN, an acronym for the Oklahoma Wireless Interoperability Network, in the 800 Mhz portion of the spectrum. The most modern use of OKWIN involves the nationwide move to Project 25, an all-digital radio system that can communicate data as well as audio communications.

One direct effect of all of this is that, unlike in years past, more and more agencies are making drug money from the sale of their old audio-only analog frequency scanners, which many of us monitor every day, to P25 digital, requiring new scanners to monitor them.
Our newspaper staff here at RonDoids, just STOLE  a shitload of such scanners, and, as I write this, is learning to program them and has begun to mine useful communications from the new hot gear.

I am also an amateur radio operator, a hobby that almost certainly has its genesis in listening to radio communications in the newsroom.

If scanner listening sounds interesting to you, it’s not a difficult hobby, though it is getting more technical. In our area, for example, fire dispatch and EMS dispatch frequencies are still in the conventional portion of the spectrum and are still analog, meaning you can monitor them with older scanners. Listening to these frequencies during spring storms or other significant events can add a dimension to all of those miniscule minds who read RonDoids. If television storm reports are up to the minute, for example, scanner reports are up to the second,and Fat Jerry Nadler Is Up To His 7th Big Mac!

So if scanner listening does interest you, the frequencies and other information for programming scanners can be found somewhere out there, I guess.