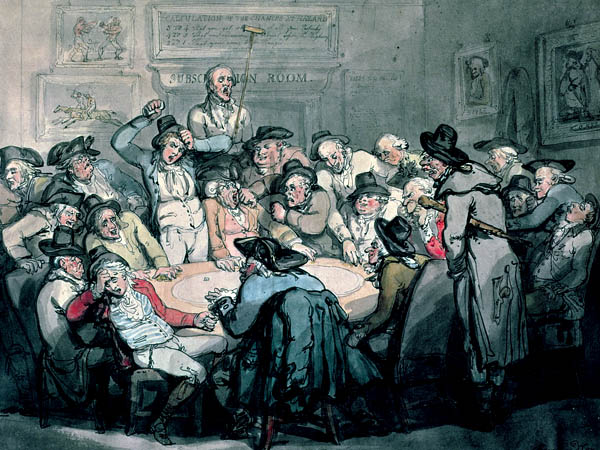 
Ah, my bread and butter: thrill-seeking rich folk with a poor grasp of statistics and probability.

A character who likes a flutter, to the extent where it becomes a habit or starts to cause problems.

At the less extreme end, the character will stick to small bets and simply enjoys the game. In some cases they may even be able to make a profit from their gambling. At the more extreme end, the character is fully addicted and quite capable of ruining their own finances, lives and those of the people around them. Perhaps more common in older works and literature, when people had to make their own entertainment and card games were a much more common social activity.

Sometimes a character develops this trait temporarily, usually in a sitcom. In these cases their new habit will often lead to a big loss, and the rest of the episode will be spent trying to recover the money or property. It's also a very convenient "habit" for a writer to use as a Compressed Vice because, as an emotional addiction, it doesn't carry outward signs that would have to be written in or accounted for later, and, as a legal or quasi-legal addiction, can be fully depicted in even some Family Friendly works and more "realistic" as an addiction for some characters than, say, heroin. Unfortunately, this often leads viewers to believe it is a Compressed Vice in real life - when real life gambling addicts range the spectrum from Compressed Vice/temporary irresponsibility to those who literally cannot stop and do incur problems with the criminal justice system or are even Driven to Suicide.

The difference between the Professional Gambler and the Gambling Addict is that the Professional Gambler is actually more of a combination of risky investor, actor and mathematician/logician, whereas Gambling Addicts often don't know or care about the odds or strategies to play them for the best possible outcome, nor do they Know When to Fold 'Em. In fact, the Gambling Addict often picks games that can't be influenced by acting or by analytical skill, such as roulette, slots, video poker, keno, or lotteries. They may think they have a "system", though. Rather than for any calculable gain, they play for the thrill and the prospect of the win that will come "any day" but likely never does (or does, but they lose it again); if they try to stop, they will find they cannot because they are hooked on this feeling.

Not to be confused with The Gambler. Often leads to being Trapped by Gambling Debts. Gambling Addiction may lead to an Absurdly High-Stakes Game. More likely than most to start a Gambling Brawl when experiencing a losing streak. If a story arc focuses on a character becoming this, it's an example of Descent into Addiction.
at May 23, 2019