By ZEKE MILLER
and
STEVE PEOPLES 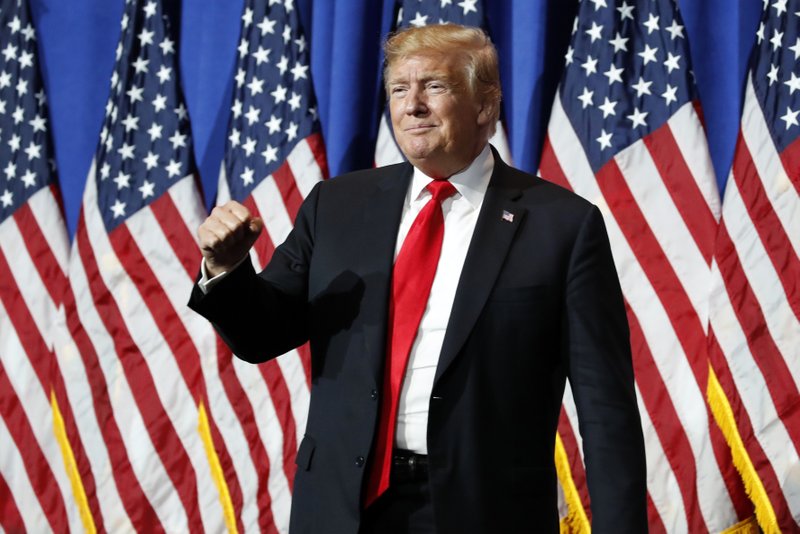 President Donald Trump arrives to speak at the National Association of REALTORS Legislative Meetings and Trade Expo, Friday, May 17, 2019, in Washington. (AP Photo/Alex Brandon)
WASHINGTON (AP) — President Donald Trump won the White House pledging to wind down the nation’s many foreign entanglements and put “America First.” But as his administration in recent days has sent mixed signals on the prospects of a military conflict with Iran, Trump’s campaign trail promise is being put to the test.
With the 2020 election approaching, the political pitfalls ahead for the first-term Republican president could be serious.
While Trump enjoys overwhelming support from his party, there is little appetite among his loyalists for a new military conflict in the Middle East. Many are willing to give him the benefit of the doubt for now, but a string of recent moves has sparked concerns that the administration was beating the drums toward war. Among the possible precursors to military conflict: new sanctions on Iran’s Revolutionary Guards, the deployment of a U.S. aircraft carrier to the region and public warnings of unspecified intelligence that Iran might strike at American interests.
Asked this week if the U.S. was going to war with Iran, Trump said simply: “I hope not.”
Aware of the potential backlash from within his party, the president is trying to play down the possibility of hostilities. He held the door open for negotiations over Iran’s nuclear program and malign activities in the region amid reports that he was pushing back against his more hawkish advisers’ preference for a military solution.
Prominent Trump supporters offered a pointed warning on Friday about the prospect of a new war, which they view as a direct violation of his “America First” pledge.
“It would be a disaster for him and for the country getting into another military engagement in the Middle East,” said Corey Stewart, who led Trump’s 2016 campaign in Virginia. “It does concern me that the president has (national security adviser John) Bolton and a lot of these neocons advising him. That’s clearly not what he ran on and what most Americans want.”
Foreign policy threatens to be a significant political liability for Trump heading into his 2020 reelection campaign.
Overall, 63 percent of Americans said they disapproved of his job handling foreign policy, according to a January poll conducted by Associated Press-NORC Center for Public Affairs Research. Like other issues, the partisan divide was overwhelming: 76 percent of Republicans approved, while just 8 percent of Democrats said the same.
Yet the Republican Party under Trump’s leadership has shifted away from wanting the United States to play an aggressive role in world affairs. Foreign policy hawks in the GOP who have long embraced a muscular foreign policy have been marginalized in recent years, dismissed as “globalists.”
By contrast, Democrats are now far more likely than Republicans to say the U.S. should play a more active role in solving the world’s problems.
In the AP poll, 43 percent of Democrats said they thought the U.S. should be more active abroad, compared to just 13 percent of Republicans.
Trump on Friday sought to blame the media for the sense of mounting unease over Iran.
“They put out so many false messages that Iran is totally confused,” he told a crowd of real estate agents in Washington, complaining about media coverage of his administration’s recent moves. “I don’t know, that might be a good thing.”
People close to the president acknowledge that an armed conflict in the region is a real possibility.
Liberty University President Jerry Falwell Jr., a Trump confidant, signaled support for a military solution if needed to prevent Iran from obtaining a nuclear weapon — so long as the United States wouldn’t take the lead role in a prospective war.
“Whatever needs to be done to keep Iran from becoming a nuclear power needs to happen,” Falwell said in an interview. “I’m not saying the United States needs to do it. Somebody is going to need to do it.”
He added: “The way that it balances out, it might be Saudi Arabia and Israel that go to war with Iran.”
J.D. Gordon, director of national security for Trump’s first campaign, described Iran as “a delicate balance” for the president, who is surrounded by advisers who “generally agree with his worldview.”
“Preventing an aggressive state sponsor of terrorism from acquiring nuclear weapons through primarily economic and diplomatic pressure isn’t as simple as many people would like us to believe,” Gordon said.
While military conflict would likely be unpopular among Republican voters, the politics on Iran are nuanced.
For years, Republicans railed against the multination pact struck under former President Barack Obama to remove economic sanctions on Iran in exchange for the country’s pledge to abandon its nuclear program. Trump last year withdrew from the deal, thrilling Israel and anti-Obama conservatives at home while troubling European allies who insisted it was working.
Mark Dubowitz, CEO of the hawkish Foundation for Defense of Democracies, said Iran takes a paramount position in Trump’s worldview, with the president believing the country poses a particularly destructive threat.
“I think one should never discount the political calculation, which is that he knows a significant part of his base, including tens of millions of evangelical Christians, agree with him,” Dubowitz said.
The passionate opposition to the Iran deal among Trump’s core supporters affords him some room to maneuver amid the military buildup, even if “America First” conservatives oppose an outright war.
“I haven’t met anybody who thinks we shouldn’t take an incredibly hard line against Iran,” said Mark Meckler, an early leader in the tea party movement. At the same time, he said, “Nobody believes there’s going to be a war.”
“What Trump promised in regards to our foreign policy is ‘America First,’” Meckler continued. “He’s doing that.”
at May 18, 2019