Nine Things That Are Now More Popular than Pitiful CNN


This week it was reported that CNN lost 26 percent of its audience, down 237,000 viewers since April 2018, and down nearly 40 percent from its 2016 peak. To put those numbers in their proper perspective: 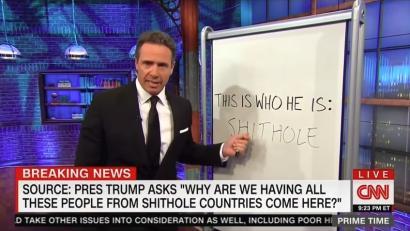 
■ Across all cable networks, CNN now ranks 15th, behind Home and Garden TV (4th), the Hallmark Channel (9th) and the Food Network (14th).


■ Their remaining 767,000 viewers could all comfortably fit in Jefferson County, Kentucky (current population 771,158).


■ More people tuned in for the 2018 Little League Baseball World Series (an average of 1.02 million per game; more than 3 million for the championship) than watch CNN these days.


■ There are more real-estate agents in the United States (1.3 million) than there are CNN viewers. And many more people work at Walmart (1.5 million) than watch CNN.


■ One survey suggests there could be twice as many witches and pagans in the United States (1 to 1.5 million) than there are CNN viewers.


■ Americans are more likely to ride a bicycle to work than to watch CNN. According to a new report from the Census Bureau, 836,569 Americans over the age of 16 say they ride a bike to work.


■ More households keep chickens and other poultry birds as pets (1,020,000) than tune in to CNN’s primetime shows, according to a survey from the American Veterinary Medical Association.

NewsBusters Reader,
Every day it becomes more evident that the liberal news media are no longer simply a megaphone for liberals in Washington, New York, and Hollywood. The media are now leading the radical Left and using their platform to push a socialist agenda.
NewsBusters cuts through the leftist propaganda and exposes the media’s liberal bias, bringing the truth to the American people.
Donate today to help NewsBusters continue to document and expose liberal media bias. $15 a month goes a long way in the fight for a free and fair media.
Posted by Ron Ernie at 22:57