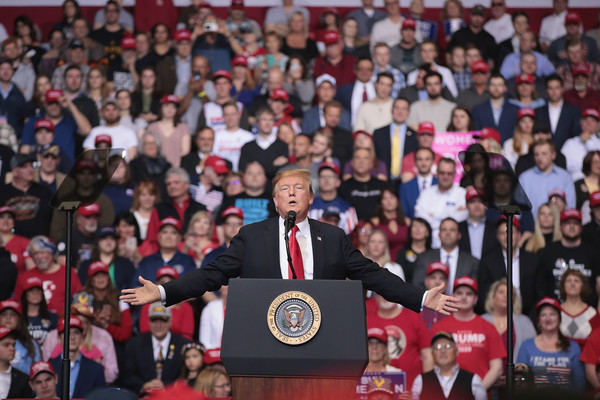 CUBAN: NONE OF THE DEMS

Mark Cuban left open the possibility of running for president, telling CNBC on Tuesday, “We’ll see.”
Cuban told CNBC’s Scott Wapner that some things would need to happen for him to be motivated to run in 2020, and if he did, it would be as an independent.
“We’ll see what happens. It would take the perfect storm for me to do it,” the billionaire entrepreneur and Dallas Mavericks owner said. “There’s some things that could open the door, but I’m not projecting or predicting it right now.”
“I still think there’s a real opportunity for somebody who is in the middle but has some charisma, has the ability to relate to both sides but is not a politician. The reality is people don’t trust politicians,” Cuban said in the telephone interview on “Halftime Report. ”

Mark Cuban, owner of the Dallas Mavericks holds up his 2010-2011 NBA Championship ring.
Nathaniel S. Butler | National Basketball Association | Getty Images
When asked who on the Democratic side has the best chance of winning, Cuban said “nobody right now.” “If you look at why people voted for Donald Trump, in my opinion, first and foremost it was because he wasn’t a politician. ”
Cuban said the more than 20 Democratic candidates so far are all politicians. “Politicians are the least trusted of every profession,” he said.
Cuban said none of the candidates stands out, not even former Vice President Joe Biden, who is leading the polls.
“I like Vice President Biden I think he’s smart and he could do a decent job, but I think it’s way too early to tell,” Cuban said.
Cuban said most of the Democratic proposals so far are just “headline porn.” “I don’t think they believe what they’re proposing is passable,” he said.
He said most of them include trickle-down taxation, which in his opinion “does not work.”
“I think that trickle-down economics is a failure. I think trickle-down taxation is just as big a failure,” Cuban said.
Cuban isn’t the first billionaire businessman contemplating an independent bid for the White House in 2020. Former Starbucks CEO Howard Schultz announced in January he was considering such a move, but he has been keeping a low profile recently.
Cuban talked of running in the 2016 campaign. He told CNBC in an email exchange that he would beat Hillary Clinton and Donald Trump, but he later said he would not run for president because he could have a bigger impact doing other things.
In the CNBC interview on Tuesday, Cuban also said Uber’s disappointing initial public offering last week was “not a surprise” because the ride-hailing company waited too long to go public.
at May 15, 2019