Skip
This day in Naval History April 26, 2019
1869 As a post-Civil War push for re-enlistments, the Good Conduct Medal, then called Good Conduct Badge, is authorized by Secretary of the Navy Adolphus E. Borie.
1918 USS Stewart (DD 13) collides with an unidentified steamer near Brest, France. Just days earlier, Stewart crew members attacked a German submarine and saved the SS Florence H crew when she exploded internally.
1944 USS Frost (DE 144), USS Huse (DE 145), USS Barber (DE 161) and USS Snowden (DE 246) sink the German submarine U 488 northwest of the Canary Islands.
1952 While steaming at night in formation 700 miles west of the Azores, USS Hobson (DD 464) and USS Wasp (CV 18) collide as Hobson crossed the carriers bow from starboard to port and was struck amidships, breaking her in two. Hobson and 176 of her crew are lost, including her commanding officer, Lt. Cmdr. W. J. Tierney.
1960 USS George Washington (SSN 598) conducts a Polaris missile test firing in Long Island Sound in the Atlantic Ocean.
2002 The Watson-class vehicle cargo ship USNS Soderman (T AKR 317) is launched at National Steel and Shipbuilding Co., San Diego, Calif.
This day in Naval History April 27, 2019
1805 With naval bombardment from USS Nautilus, USS Hornet, and USS Argus, Lt. Presley OBannon leads his Marines to attack Derne, Tripoli, and raises the first U.S. flag over foreign soil. The Battle of Derna was the Marines' first battle on foreign soil, and is notably recalled in the first verse of the Marines Hymn.
1813 A U.S. naval squadron under the command of Commodore Isaac Chauncey supports an attack on York (now Toronto), Canada, of nearly 1,800 troops under Gen. Zebulon Pike during the War of 1812.
1944 USS Bluegill (SS 242) torpedoes the Japanese light cruiser Yubari west of Sonsorol Island, while USS Halibut (SS 232) sinks Japanese minelayer off Okinawa.
1952 During the Korean War, USS Samuel N. Moore (DD 747) conducts counter-battery fire against enemy shore batteries off Kosong, Korea. The enemy guns are silenced. Also on this date, USS Waxbill (AMS) is damaged by enemy shore battery off Wonsan, Korea.
1963 USS Daniel Webster (SSBN 626) is launched at Groton, Conn. Commissioned a year later, she serves until decommissioned in August 1990.
This day in Naval History April 28, 2019
1930 Secretary of the Navy appoints the first Curator for the Department of the Navy, Dudley Knox.
1942 The U.S. Navy's Task Force 99, which consists of USS Wasp, USS Tuscaloosa and USS Wichita, plus four destroyers, sail from the Royal Navy base at Scapa Flow, Orkney Islands, as part of the mixed U.S.-British force Distaff, to provide cover for Russian convoy at Iceland.
1944 German torpedo boats attack U.S. Navy LST convoy in Lyme Bay during Operation Tiger training for the Normandy Invasion. USS LST 507 and USS LST 531 are sunk at Portland Bill, England, and USS LST 289 is damaged, with 198 Sailors dead or missing and 551 Army dead or missing from later reports.
1944 Secretary of the Navy Frank Knox dies. He expanded the Navy into a force capable of fighting in both the Atlantic and the Pacific during the early years of World War II.
1945 USS Sennet (SS 408) sinks the Japanese cable layer Hatsushima off Kii Strait, south southeast of Miki Saki; USS Springer (SS 414) sinks the Japanese submarine chaser CH 17 west of Kyushu as she is escorting landing ship T.146, and USS Trepang (SS 412) sinks T.146 off Ose Saki, Japan.
Thanks to CHINFO
Executive Summary:
China's President Xi Jinping announcing a recalibration of his global infrastructure-building program as he sought to assuage foreign critics who blame Beijing for pushing excessive lending onto developing economies. North Korean leader Kim Jong Un said, alongside Russian President Vladimir Putin, the United States acted in "bad faith" during negotiations in Vietnam. The Kitsap Sun reports that Chief of Naval Operations Admiral John Richardson visited Naval Base Kitsap where he talked about the importance of Naval Base Kitsap and the future Columbia class submarine, calling the submarine program the "No. 1 priority" for the nation's defense. C4ISRNET reported that USS Thomas S. Hudner (DDG-116) participated in a successful live-fire missile exercise with an Aegis "virtual twin" system. The system, which can operate Aegis software with a fraction of the hardware previously necessary, could reduce Aegis upgrade costs significantly. Additionally, Stars and Stripes reports that the Navy will christen USNS Guam (T-HST 1) and the final Zumwalt-class guided-missile destroyer USS Lyndon B. Johnson (DDG 1002) on Saturday.
This day in History
April 26
NNNNNNNNNNNNNNNNNNNNNNNNNNNNNNNNNNNNNNNNNNNNNNNNNNN
In the summer of 1953 I contacted polio while I was at a summer camp on Fort Hood Texas. I spent the summer in the hospital but the disease never got a good hold on me for some reason. So I got to get the vaccine. In fact every time they came out with a new vaccine my mother had me in the front of the line to get the thing. Needles were not my favorite thing after taking a rabies series earlier that year after a dog got into our second grade school yard and bit 4 or 5 us. The dog bit me on butt as I was  climbing the fence to get away. They could not find the dog so we all got the long needle in the stomach as I remember.
NNNNNNNNNNNNNNNNNNNNNNNNNNNNNNNNNNNNNNNNNNNNNNN
Thanks to Carl
https://nypost.com/2019/04/23/new-book-reveals-truth-behind-this-famed-fall-of-saigon-photo/
Almost everything you thought about the famed Fall of Saigon photo isn't true
By Reed Tucker  April 23, 2019 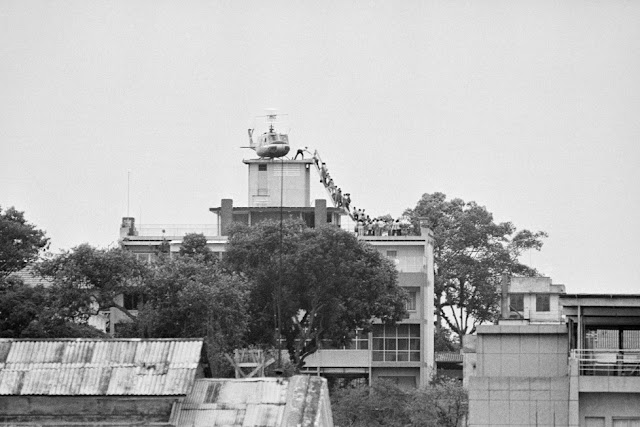