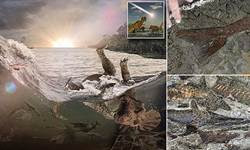 To All,
I hope that your week has been going well. Tomorrow is Bubba Breakfast
This day in Naval History April 3, 2019
1776 Continental Navy Frigate Columbus captures the British schooner HMS Hawk, making the first American capture of a British armed vessel. Columbus later captures the British brig Bolton.
1854 American and British naval brigades of 90 and 150 men engage Chinese Imperial troops at Shanghai after acts of aggression against American and British citizens. The American party fell under the command of Cmdr. J. Kelly, the commanding officer of USS Plymouth.
1933 USS Akron (ZRS-4)crashes tail-first into the sea due to a violent storm coming off the New Jersey coast, killing Rear Adm. William A. Moffett, Medal of Honor recipient and the first Chief of the Bureau of Aeronautics, along with 75 others. Only three survive.
1943 USS Porpoise (SS 172) sinks the Japanese whaling ship Koa Maru near Eniwetok.
1949 The North Atlantic Treaty is signed in Washington, D.C., establishing the North Atlantic Treaty Organization. The treaty promotes peace, stability, and well-being in the North Atlantic area with a collective defense effort.
1981 USS Stephen W. Groves (FFG 29) is launched and commissioned the following year. She is named in honor of Ensign Groves for "fearlessly plunging into aerial combat against large formations of enemy aircraft threatening the American carriers in the Battle of Midway."
Thanks to CHINFO
Executive Summary:
In national news headlines today, sources state that the sensor damaged by a foreign object on Ethiopian Airlines 737 MAX triggered fatal crash as the findings are expected to be released today. The Naval Sea Systems Command (NAVSEA) Shipyard Infrastructure Optimization Plan (SIOP) Program Office will be leading an effort to modernize infrastructure at the four public nuclear shipyards. "Modernizing our four naval shipyards -- a massive task under any circumstance -- is critical because it's the only way we will be able to meet our future mission requirements," said NAVSEA Commander Vice Adm. Tom Moore. Addressing a joint session of Congress, NATO secretary general Jens Stoltenberg called on NATO members to take a stand against a more assertive Russia Reports the New York Times. Additionally, Under Secretary of Defense for policy John Rood told congress on Wednesday that the Pentagon is in the early stages of developing low-yield submarine-launched nuclear-tipped cruise missiles reports USNI News.
April 4
NNNNNNNNNNNNNNNNNNNNNNNNNNNNNNNNNNNNNNNNNNNNNNN
Lest we forget thanks to Clint
THE NATIONAL ANTHEM
If a person lives long enough they realize they can  learn new things every day.  It's part of America's  history and this video is really awesome.
Too bad this video can't be shown before all events to remind everyone why The National Anthem is played.  Younger generations have yet to
understand what this country is all about.  Next time you see hats on, people not standing at attention with their hand over their heart while our
National Anthem is played, remember this video. Also remember, we have some misguided persons who want to change our National Anthem
because they feel the Star Spangled Banner is just too combative and portrays violence.  It is from violence that we, as Americans, became a
"free nation."  Lest we forget!
Click below for a great video and perhaps a much greater understanding of the history of America and our National Anthem.