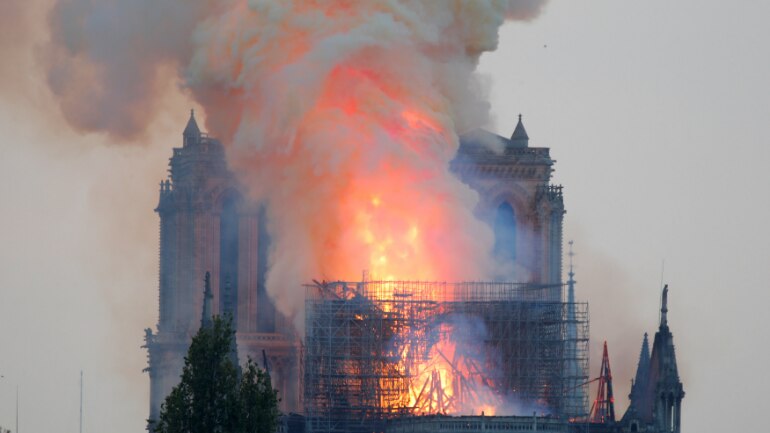 Smoke billows from the Notre Dame Cathedral after a fire broke out on Monday. (Image: Reuters)

Notre-Dame Cathedral went up in flames on Monday in a roaring blaze that devastated the Parisian landmark, a searing loss for the city and for France.

Flames that began in the early evening burst through the roof of the centuries-old cathedral and engulfed the spire, which collapsed, quickly followed by the entire roof.

A huge plume of smoke wafted across the city and ash fell over a large area.

"Like all our compatriots, I am sad this evening to see this part of all of us burn," President Emmanuel Macron tweeted.

"Basically the whole rooftop is gone. I see no hope for the building," said witness Jacek Poltorak, watching the fire from a fifth-floor balcony two blocks from the southern facade of the cathedral, one of France's most visited places.

Firefighters cleared the area around Notre-Dame, which sits on an island in the River Seine and marks the very centre of Paris. Buildings around were evacuated.

"Everything is collapsing," a police officer near the scene said as the entire roof of the cathedral continued to burn.

Macron cancelled an address to the nation that he had been due to give later on Monday evening. A presidential official said Macron was to go to the scene of the blaze.


France 2 television reported that police were treating the incident as an accident.

The cathedral, which dates back to the 12th century, features in Victor Hugo's classic novel "The Hunchback of Notre-Dame". It attracts millions of tourists every year.

Notre-Dame was in the midst of renovations, with some sections under scaffolding and bronze statues were removed last week for works.

The wood and lead spire was built during a restoration in the mid-19th century, according to the cathedral's website.