A North Carolina man was charged with
animal cruelty and abandonment after
leaving his pet fish in filthy water.

It just so happened that Michael Hinson, was
evicted from his Wilmington, North Carolina,
home last month and left the fish behind in
a dirty tank with no food. Hinson was charged Wednesday with one
count of abandonment of an animal and three
counts of misdemeanor cruelty to animals.

However charges have now been
dropped against the fish owner since the
New Hanover County District Attorney
Ben David says fish aren't protected under
related statues that define "animal.


Authorities took the 6-inch-long fish to a pet
shop that sells pet fish and supplies, where it
was discovered that the fish was suffering
from hole in the head disease.

Pet shop employee Brett Edwards said it's
amazing this fish survived since He has
never seen a case this bad!

The Pet Store has been treating the fish's
disease and expects it to make a full recovery,
although Edwards said it's hard to tell when it
will be 100 percent healthy because of how
severe the case was. Once the fish does
recover, officials will most likely find a new
home for it.

Sorry We can not show a picture of
the actual Victim since he is a Minor!

But here is a file photo. 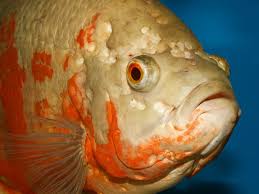 I wonder if this is what some of Our NY and California Politicians are suffering from?
at April 28, 2019