News this week that Delta Air Lines is testing seats that recline even less should be sufficient to confirm airline passengers’ fears that things will only get worse before they get, almost certainly, worse.

But give Delta this much credit:
At least they're still providing seats. 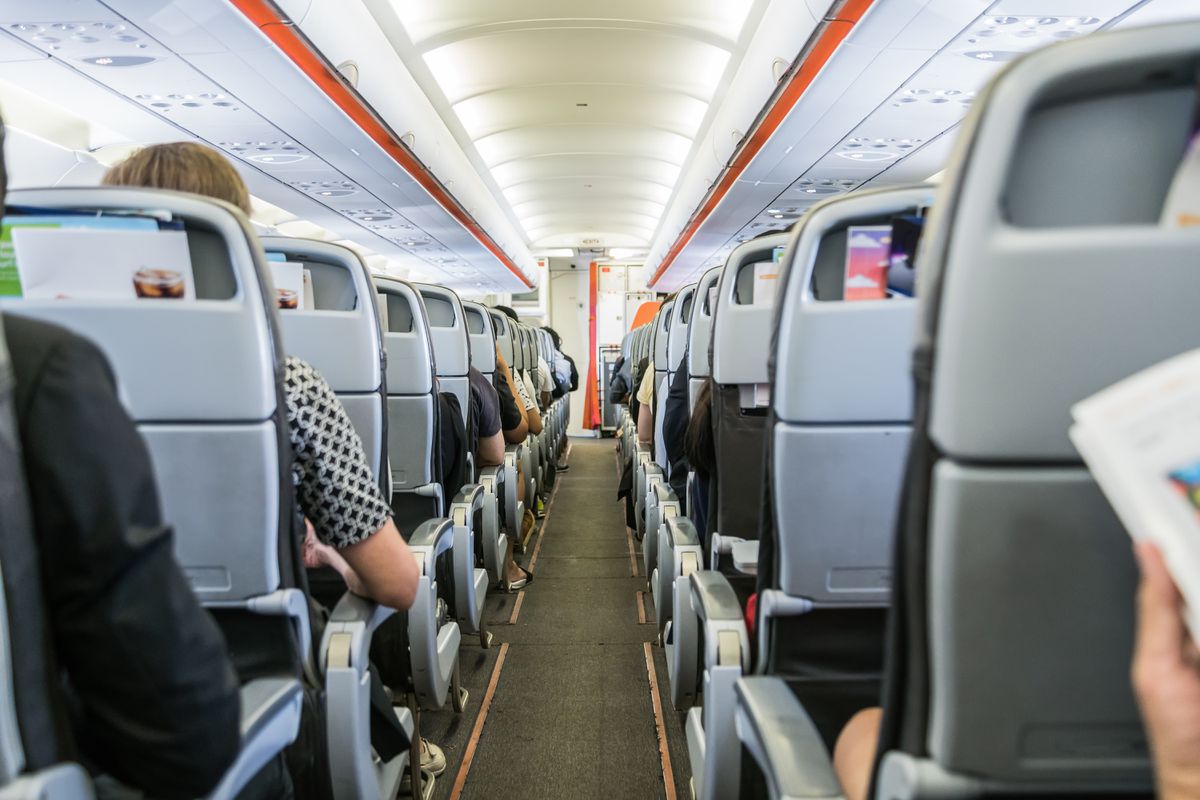 A glimpse of how bad things really could get was provided the other day at the Aircraft Interiors Expo 2019 trade show in Hamburg, Germany.

The event featured plenty of innovations intended to make air travel more comfortable for those who can afford top-dollar trimmings, including first-class and business-class seats with lots of amenities.

And then there was the Italian seat manufacturer Aviointeriors, which displayed the latest iteration of its Skyrider "standing seat." It's an idea that the company unveiled about a decade ago and keeps refining to make it more appealing to airlines.

Imagine a bicycle seat with a lightly padded, upright piece of plastic to lean against.

That's pretty much the Skyrider, which Aviointeriors is hoping will be the hot ticket for carriers looking to cram even more seats into economy-class cabins, particularly for shorter flights.

"Skyrider is concept foundation of new way to travel in the short-haul routes," the company declares in passable English on its website. "Innovation is driving Aviointeriors in developing a new concept of a family of economy seats."

I reached out to Aviointeriors by email to see what kind of interest airlines have shown to the Skyrider and whether any orders have been received. I didn't get a response.

But considering that Aviointeriors has been steadily tweaking the design to meet carrier and regulatory requirements, I'm figuring they're serious about getting this product into the aviation marketplace.

Which makes me comfortable — and that’s not a word that otherwise applies to this column — in believing it’s just a matter of time before we start seeing, if not the Skyrider, then some other variation on a bare-bones, torture-chamber apparatus that will be passed off as a boon to budget-minded passengers.

“I have no doubt at all,” agreed Kate Hanni, founder of FlyersRights.org, an advocacy group. “If the airlines can get away with shoving more seats onto a flight, they’ll do it.”

As for Skyrider seats, she said, "there has to be interest" among airlines. "There's no way they're not interested in something like this."

In Delta's case, the airline is testing reduced-recline seats on its entire A320 fleet. The idea, Delta insists, isn't to squeeze more seats into the economy cabin.

"It's all about protecting customers' personal space and minimizing disruptions to multitasking in-flight." Savannah Huddleston, a company spokeswoman, said in a statement.

What she means by that positive-sounding sentiment is that by restricting how far seats can lean back, you're protecting what little space each person has, so passengers can type on a laptop, or read a book, and not have the seat in front of them touching their chin.

Huddleston said limiting how far seats can go back is part of Delta's "continued efforts to make the in-flight experience more enjoyable."

This is what it's come to: Making everyone largely immobile so as not to infringe on what little room each passenger is given. That's the new definition of "more enjoyable" air travel.

When discussing airline seats, it's all about "pitch." That's the distance from a point on one seat to the same point on the seat before it. This is what defines not just the space in front of your torso but also how much (or little) legroom you're allotted.

Many carriers strive for an economy-class seat pitch of 29 to 32 inches.

Marcia Alexander-Adams, a spokeswoman for the Federal Aviation Administration, told me she couldn't comment on specific seat designs.

"But in general," she said, "any seat design must meet the applicable FAA certification regulations."

Those regulations include a number of safety-related standards, such as seats being designed "so that a person making proper use of these facilities will not suffer serious injury in an emergency landing," and so there will be no "injurious object within striking radius of the head."

What the regulations don’t include is any minimums for seat size or pitch — no requirement that a seat be wide enough to accommodate an ordinary human, no requirement for enough legroom to prevent acts of contortion.

In other words, airline seats can be as existentially challenging as a carrier wants, depending on its levels of greed and sadism.

As best as I can tell, they don't even have to be seats, which is good news for Aviointeriors and its Skyrider bicycle saddles. The regs refer to "berths," which introduces an element of ambiguity to the definition of what you'll be strapped to.

At the Hamburg expo, Aviointeriors also was promoting what it calls its ESP seats, as in "economy slim platform."

These are more like traditional seats in that they have, you know, actual seats. But otherwise they're about as minimalist an experience as you can imagine.

Aviointeriors says online that the ESP seats meet the "best space exploitation international standards," which is a fancy way of saying, "Here's how you can really pack 'em in."

Yet, incredibly, these aren't the worst seating arrangements under consideration. Conde Nast Traveler recently rounded up patents filed for truly grisly airline experiences. These include:

• A proposal from Airbus, the European aviation powerhouse, for a bike saddle-style contraption that looks more like playground equipment than an airline seat. The patent acknowledges that even though this setup accommodates more people, “this increase in the number of seats is achieved to the detriment of the comfort of the passengers.”

• Another idea from Airbus that stacks passengers bunk-bed-style _ bottom seats and top seats. This has the virtue of allowing you to get twice as many people into roughly the same amount of space.

• And my particular favorite from Zodiac Seats France, boasting a hexagonal design that alternates forward-facing seats with rear-facing seats, thus creating, perhaps deliberately, the precise sensation of a can of sardines.

Delta, by comparison, deserves a prize for humanitarianism.

As for the FAA — seriously, guys? Make a seat-size rule already and put an end to this madness.