Nicholas Ward
Long only, long-term horizon, dividend investing, value
Summary
After the company's 32% dividend increase, I was a buyer.
It's rare to find stocks that offer safe, 3% yields and double-digit dividend growth prospects.
HD isn't cheap at 18x forward earnings, but I couldn't pass up entry level exposure to this yield.
Home Depot (NYSE:HD) is a name that I've followed for some time now. It's a stock that I've owned in the past, and frankly put, I've got a bit of seller's remorse. Well, it's time to put that remorse to bed. On Thursday, I bought HD shares, giving myself exposure to the name for the first time since June of 2017. I paid $184.52 per share, which, as I will discuss later, isn't exactly a screaming deal. But it does give me exposure to a stock that yields nearly 3% and has double-digit dividend growth potential moving forward. Those opportunities are rare in the market, and I look forward to my future with HD.
For a while now, I've sort of grouped HD up with another top-performing retail name, Costco (NASDAQ:COST). Both of these companies have basically bucked the "Amazoned" trend that many (including myself) expected to see play out in the physical retail space. Because of the strong growth metrics that this success has produced (and the strong dividend growth that comes along with it), both of these companies demand a high premium in the market. I haven't been willing to pay any sort of premium for a physical retail name for years now and, therefore, HD has been relegated to the backburner in terms of my DGI priority list. However, when I saw Home Depot raise its dividend by more than 30%, my eyes lit up. That is truly fantastic. And, whether I liked it or not, I had to essentially admit defeat of my bearish opinion after that result, and once again, partner with the stock as a shareholder.
I'll discuss HD's recent quarter in a moment, but I want to skip the dinner and get right into the dessert here: Home Depot just increased its dividend by 32% from $1.03 to $1.36/share on a quarterly basis. I was expecting a 10-15% increase from HD this year. In short, this 32% increase basically moves up the passive income target from HD up a year. This played a significant role in the rationale behind my recent purchase. 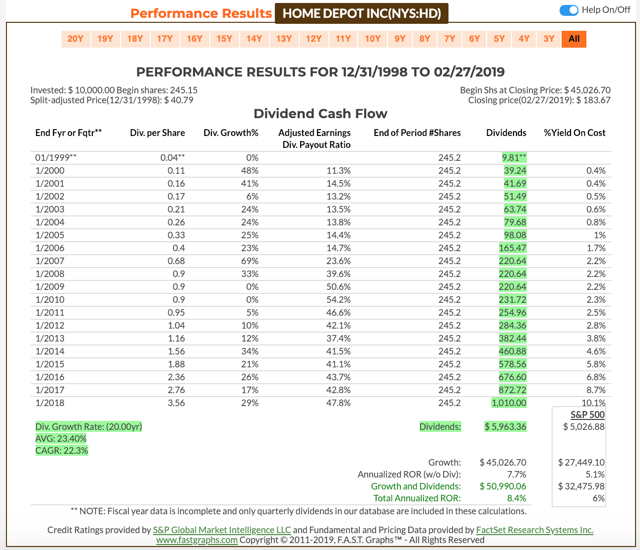 I am/we are long HD, AMZN, ITW. I wrote this article myself, and it expresses my own opinions. I am not receiving compensation for it (other than from Seeking Alpha). I have no business relationship with any company whose stock is mentioned in this article.
Like this article
134,734 people have HD in their portfolio and get alerts
Posted by Ron Ernie at 11:14