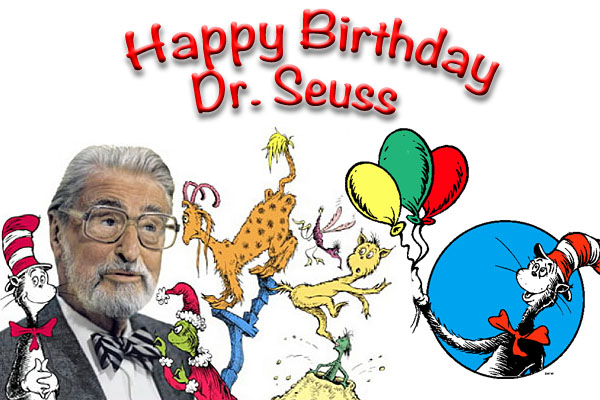 On this day in 1904, Theodor Geisel, better known to the world as Dr. Seuss, the author and illustrator of such beloved children’s books as “The Cat in the Hat” and “Green Eggs and Ham,” is born in Springfield, Massachusetts. Geisel, who used his middle name (which was also his mother’s maiden name) as his pen name, wrote 48 books–including some for adults–that have sold well over 200 million copies and been translated into multiple languages. Dr. Seuss books are known for their whimsical rhymes and quirky characters, which have names like the Lorax and the Sneetches and live in places like Hooterville.

Geisel, who was born on March 2, 1904, in Springfield, Massachusetts, graduated from Dartmouth College, where he was editor of the school’s humor magazine, and studied at Oxford University. There he met Helen Palmer, his first wife and the person who encouraged him to become a professional illustrator. Back in America, Geisel worked as a cartoonist for a variety of magazines and in advertising.

The first children’s book that Geisel wrote and illustrated, “And to Think That I Saw It On Mulberry Street,” was rejected by over two dozen publishers before making it into print in 1937. Geisel’s first bestseller, “The Cat in the Hat,” was published in 1957. The story of a mischievous cat in a tall striped hat came about after his publisher asked him to produce a book using 220 new-reader vocabulary words that could serve as an entertaining alternative to the school reading primers children found boring.

Other Dr. Seuss classics include “Yertle the Turtle,” “If I Ran the Circus,” “Fox in Socks” and “One Fish, Two Fish, Red Fish, Blue Fish.”

Some Dr. Seuss books tackled serious themes. “The Butter Battle Book” (1984) was about the arms buildup and nuclear war threat during Ronald Reagan’s presidency. “Lorax” (1971) dealt with the environment.

Many Dr. Seuss books have been adapted for television and film, including “How the Grinch Stole Christmas!” and “Horton Hears a Who!” In 1990, Geisel published a book for adults titled “Oh, the Places You’ll Go” that became a hugely popular graduation gift for high school and college students.

GENERAL INTEREST
1836
Texas declares independence
During the Texas Revolution, a convention of American Texans meets at Washington-on-the-Brazos and declares the independence of Texas from Mexico. The delegates chose David Burnet as provisional president and confirmed Sam Houston as the commander in chief of all Texan forces. ...

ART, LITERATURE, AND FILM HISTORY
1985
Sheena Easton sets a Billboard chart record when “Sugar Walls” becomes a Top 10 R&B hit
The controversial Prince-penned song "Sugar Walls" reaches #9 on Billboard Billboard To be fair, this same feat might have been achieved by Elvis Presley had the Dance chart existed during his heyday. But that is not to take anything away from Easton, who in her journey from the ...

GENERAL INTEREST
1972
Pioneer 10 launched to Jupiter
Pioneer 10, the world’s first outer-planetary probe, is launched from Cape Canaveral, Florida, on a mission to Jupiter, the solar system’s largest planet. In December 1973, after successfully negotiating the asteroid belt and a distance of 620 million miles, Pioneer 10 reached ...

GENERAL INTEREST
1807
Congress abolishes the African slave trade
The U.S. Congress passes an act to “prohibit the importation of slaves into any port or place within the jurisdiction of the United States…from any foreign kingdom, place, or country.” The first shipload of African captives to North America arrived at Jamestown, Virginia, in ...

WORLD WAR II
1943
The Battle of the Bismarck Sea
On this day, U.S. and Australian land-based planes begin an offensive against a convoy of Japanese ships in the Bismarck Sea, in the western Pacific. On March 1, U.S. reconnaissance planes spotted 16 Japanese ships en route to Lae and Salamaua in New Guinea. The Japanese were ...

WORLD WAR I
1917
Puerto Ricans become U.S. citizens, are recruited for war effort
Barely a month before the United States enters World War I, President Woodrow Wilson signs the Jones-Shafroth act, granting U.S. citizenship to the inhabitants of Puerto Rico. Located about 1,000 miles southeast of Florida—and less than half that distance from the coast of South ...