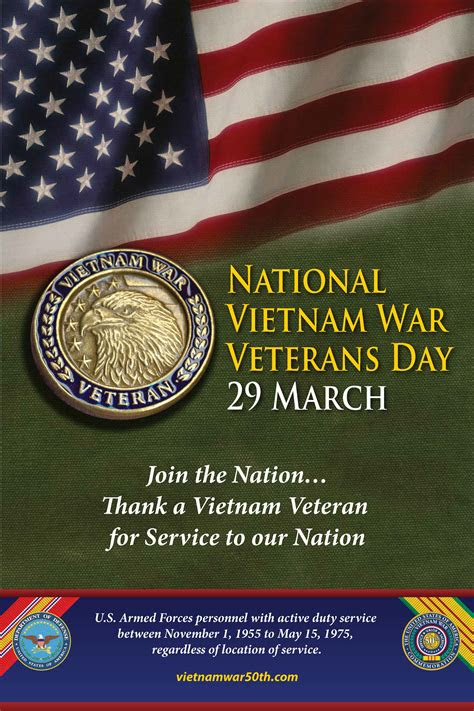 On March 28, 2017, President Donald J. Trump, signed into law The Vietnam War Veterans Recognition Act of 2017, designating every March 29 as National Vietnam War Veterans Day.
National Vietnam War Veterans Day joins six other military-centric national observances codified in Title 4 of the United States Code §6 (i.e., Armed Forces Day, Memorial Day, Independence Day, National Korean War Veterans Armistice Day, Navy Day, Veterans Day).
March 29 was chosen to be celebrated in perpetuity as March 29, 1973 was the day Military Assistance Command Vietnam was deactivated.
The United States of America Vietnam War Commemoration honors all United States veterans who served on active duty in the U.S. Armed Forces from November 1, 1955 to May 15, 1975, regardless of location.
November 1, 1955 was selected to coincide with the official designation of Military Assistance Advisory Group-Vietnam (MAAG-V); May 15, 1975 marks the end of the battle precipitated by the seizure of the SS Mayaguez.
The Department of Veterans Affairs estimates that today there are 6.4 million living Vietnam veterans and 9 million families of those who served during this time frame. We make no distinction between veterans who served in-country, in- theater, or who were stationed elsewhere during the Vietnam War period. All were called to serve and none could self-determine where they would serve.
Additional Background: U.S. involvement in Vietnam started slowly with an initial deployment of advisors in the early 1950s, grew incrementally through the early 1960s and expanded with the deployment of full combat units in July 1965. The last U.S. personnel were evacuated from Vietnam in April 1975.
This national commemoration was authorized by Congress, established under the Secretary of Defense, and launched by the President to thank and honor our Nation’s Vietnam veterans and their families for their service and sacrifice.
In 2007, the 110th Congress incorporated language in House of Representatives (H.R.) 4986 authorizing the Secretary of Defense to conduct a program commemorating the 50th anniversary of the Vietnam War.
H.R. 4986 was signed into law as the National Defense Authorization Act (NDAA) for Fiscal Year 2008 by President George W. Bush on January 28, 2008.
44th U.S. President Barack Obama officially inaugurated this Commemoration at the Vietnam Veterans Memorial in Washington D.C. on Memorial Day, May 28, 2012.
Section 598 (Public Law 110-181) of the 2008 NDAA specifically addresses Commemoration activities.
Congress outlined a total of five objectives for this U.S.A. Vietnam War Commemoration, with the primary objective being to thank and honor Vietnam veterans and their families for their service and sacrifice on behalf of the Nation, with distinct recognition of former prisoners of war and families of those still listed as missing in action.
The four remaining objectives highlight the service of our Armed Forces and support organizations during the war; pay tribute to wartime contributions at home by American citizens; highlight technology, science and medical advances made during the war; and recognize contributions by our Allies.

By Presidential Proclamation, The U.S.A. Vietnam War Commemoration will continue through Veterans Day, November 11, 2025.
How and what does a person do to recognize NVNWV Day?

It’s simple – Spend some time trolling through the archives of our website and the links…most of all, take another look at “Over War—Cade Martin Photography—Thud Voices”  link below.