Get set for 'super snow moon,' the biggest supermoon of the year

Skygazers will be treated to the “super snow moon,” on Feb. 19, the largest supermoon of 2019.
February’s full moon is known as the “snow moon” as a result of the heavy snowfall that often occurs at that time of year, according to the Old Farmer’s Almanac. As a result, the Feb. 19 supermoon has been dubbed the “super snow moon.”
Supermoons occur when the Moon’s orbit brings it to the closest point to Earth while the Moon is full.
'SUPER BLOOD MOON' ECLIPSE STUNS IN REMARKABLE PICTURES
“When a full moon appears at perigee [its closest point to Earth] it is slightly brighter and larger than a regular full moon—and that's where we get a ‘supermoon’,” explains NASA, on its website, noting that the phrase was coined in 1979. 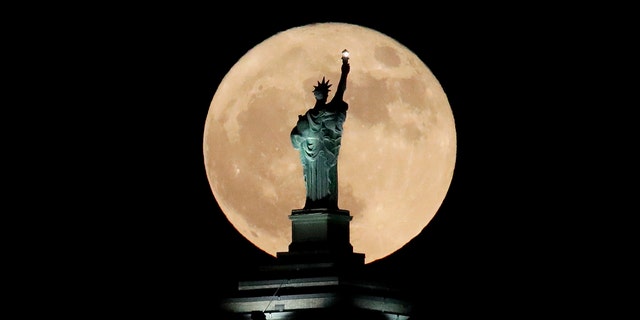 A supermoon rises in front of a replica of the Statue of Liberty sitting atop the Liberty Building in downtown Buffalo, N.Y., Sunday, Dec. 3, 2017.  (AP Photo/Julio Cortez)
The Moon will be 221,734 miles from Earth on Feb. 19, according to EarthSky, its closest full moon to Earth in 2019.
For people watching the celestial event in New York City, the Moon will rise at 5:46 p.m. and set at 7:35 a.m. on Feb. 20, according to the U.S. Naval Observatory. The Moon will appear particularly large when it is close to the horizon thanks to an optical illusion known as “the moon illusion.”
APOLLO 8 ASTRONAUTS RECOUNT NASA'S EPIC FIRST MISSION TO THE MOON
Although closer to the Earth, the Feb. 19 supermoon will not be as colorful as last month’s ‘super blood Moon’ eclipse that saw the Earth ’s natural satellite turn a stunning shade of red. The celestial event was 2019’s only total lunar eclipse and generated plenty of buzz. 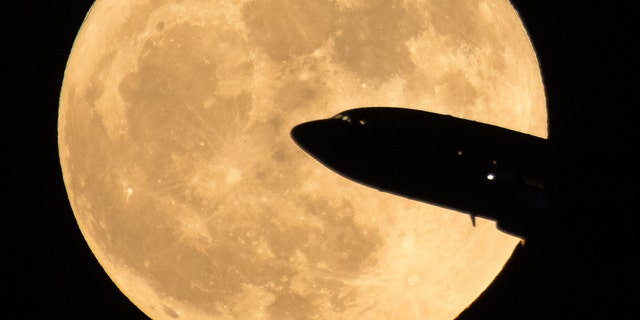 File photo - An aircraft taking off from Ronald Reagan National Airport is seen passing in front of the Moon as it rises, Sunday, Dec. 3, 2017 in Washington. (NASA/Bill Ingalls)
The Moon continues to be a source of fascination. China, for example, recently became the first country to successfully land a spacecraft on the far side of the Moon. In December, a checklist that traveled to the surface of the Moon with Apollo 11 astronauts Neil Armstrong and Buzz Aldrin was sold at auction in New York for $62,500.
at February 15, 2019