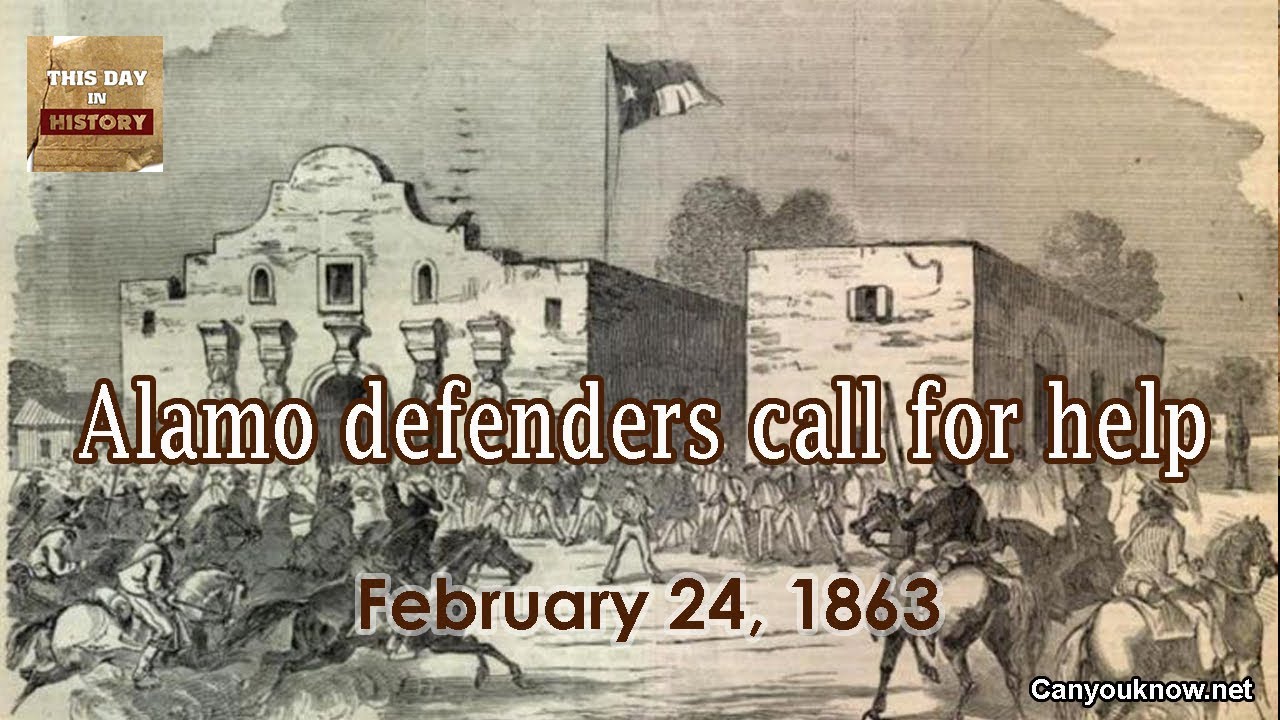 On this day in 1836, in San Antonio, Texas, Colonel William Travis issues a call for help on behalf of the Texan troops defending the Alamo, an old Spanish mission and fortress under attack by the Mexican army.

A native of Alabama, Travis moved to the Mexican state of Texas in 1831. He soon became a leader of the growing movement to overthrow the Mexican government and establish an independent Texan republic. When the Texas revolution began in 1835, Travis became a lieutenant-colonel in the revolutionary army and was given command of troops in the recently captured city of San Antonio de Bexar (now San Antonio). On February 23, 1836, a large Mexican force commanded by General Antonio Lopez de Santa Ana arrived suddenly in San Antonio. Travis and his troops took shelter in the Alamo, where they were soon joined by a volunteer force led by Colonel James Bowie.

Though Santa Ana’s 5,000 troops heavily outnumbered the several hundred Texans, Travis and his men determined not to give up. On February 24, they answered Santa Ana’s call for surrender with a bold shot from the Alamo’s cannon. Furious, the Mexican general ordered his forces to launch a siege. Travis immediately recognized his disadvantage and sent out several messages via couriers asking for reinforcements. Addressing one of the pleas to “The People of Texas and All Americans in the World,” Travis signed off with the now-famous phrase “Victory or Death.”

Only 32 men from the nearby town of Gonzales responded to Travis’ call for help, and beginning at 5:30 a.m. on March 6, Mexican forces stormed the Alamo through a gap in the fort’s outer wall, killing Travis, Bowie and 190 of their men. Despite the loss of the fort, the Texan troops managed to inflict huge losses on their enemy, killing at least 600 of Santa Ana’s men.

The brave defense of the Alamo became a powerful symbol for the Texas revolution, helping the rebels turn the tide in their favor. At the crucial Battle of San Jacinto on April 21, 910 Texan soldiers commanded by Sam Houstondefeated Santa Ana’s army of 1,250 men, spurred on by cries of “Remember the Alamo!” The next day, after Texan forces captured Santa Ana himself, the general issued orders for all Mexican troops to pull back behind the Rio Grande River. On May 14, 1836, Texas officially became an independent republic.

ART, LITERATURE, AND FILM HISTORY
2004
“Grey Tuesday” brings mashups to the mainstream
The phenomenon known as the “mashup” can be traced back through at least several decades of radio DJs and record producers manipulating, or “remixing,” one or more existing recordings to create a new musical work. With the rise of digitally distributed music and of inexpensive, ...

GENERAL INTEREST
1988
Supreme Court defends right to satirize public figures
The U.S. Supreme Court votes 8-0 to overturn the $200,000 settlement awarded to the Reverend Jerry Falwell for his emotional distress at being parodied in Hustler, a pornographic magazine. In 1983, Hustler ran a piece parodying Falwell’s first sexual experience as a drunken, ...

GENERAL INTEREST
1968
Tet offensive halted
On February 24, 1968, the Tet Offensive ends as U.S. and South Vietnamese troops recapture the ancient capital of Hue from communist forces. Although scattered fighting continued across South Vietnam for another week, the battle for Hue was the last major engagement of the ...

GENERAL INTEREST
1946
Peron elected in Argentina
Juan Domingo Peron, the controversial former vice president of Argentina, is elected president. In 1943, as an army officer, he joined a military coup against Argentina’s ineffectual civilian government. Appointed secretary of labor, his influence grew and in 1944 he also became ...

GENERAL INTEREST
1868
President Andrew Johnson impeached
The U.S. House of Representatives votes 11 articles of impeachment against President Andrew Johnson, nine of which cite Johnson’s removal of Secretary of War Edwin M. Stanton, a violation of the Tenure of Office Act. The House vote made President Johnson the first president to be ...