1941—The keel to USS Wisconsin (BB 64) is laid. Commissioned in April 1944, she serves during the later stages of World War II in the Pacific. She is now a museum battleship stationed in Norfolk, VA.
1943—USS Shad (SS 235) encounters German blockade runners transporting ore in the Bay of Biscay. Shad fires on Nordfels, but the torpedo fails to explode, and Nordfels returns to Bilbao, Spain.
1945—USS McLanahan (DD 615) shells the German command post on the Italian Rivera and silences the shore battery.
1945—USS Silversides (SS 236), despite the presence of auxiliary submarine chasers, sinks the Japanese army cargo ship Malay Maru off Kuro Jima.
1952—High speed transport ship Wantuck (APD 125) under CTF 95 OpControl, lands South Korean troops at night for demolition raid on enemy rail line, tunnels and bridges east coast of Korea.
1963—The 1st Seabee Technical Assistance Team arrives in Vietnam. By the end of 1964, 14 teams are operating or have completed their six-month tours.
Jan. 26
1913—The body of John Paul Jones is laid in its final resting place in the Chapel of Naval Academy, Annapolis, MD.
1943—USS Wahoo (SS 238) sinks entire convoy of four Japanese supply ships north of New Guinea.
1944—USS Skipjack (SS 184) sinks the Japanese destroyer Suzukaze and the aircraft ferry Okitsu Maru in the Caroline Islands area. Also on this date, USS Hake (SS 256) sinks the Japanese auxiliary netlayer Shuko Maru off Ambon and USS Crevalle (SS 291) sinks the Japanese gunboat Busho Maru 175 miles southeast of Cape St. Jacques, French Indochina.
1949—USS Norton Sound (AVM 1), the first guided-missile ship, launched the first guided-missile, Loon.
1960—Destroyer John S. McCain (DL 3) rescues the entire 41-man crew of the sinking Japanese freighter, Shinwa Maru, in the East China Sea.
Jan. 27
1778—During the American Revolution, the Continental sloop Providence, commanded by Capt. O. P. Rathburne, attacks New Providence Island, spikes the guns of the fort, captures small arms, holds off the sloop-of-war Grayton, and captures a privateer and five other vessels, while freeing 20 released American prisoners.
1942—Submarine Gudgeon (SS 211) becomes the first U.S. Navy submarine to sink an enemy Japanese submarine in action during World War II.
1945—Destroyer Higbee (DD 806) is commissioned. She is the first U.S. Navy combat ship to bear the name of a female member of the naval service.
1952—U.S. Navy carrier aircraft cut the Korean railroad, a constant target during the Korean War, in 165 places, a record for a single day's aircraft operations by Fast Carrier Task Force (TF 77).
1967—Tragedy strikes the Apollo space program when a flash fire occurs in command module 012 during a launch pad test of the Apollo/Saturn space vehicle being prepared for the first piloted flight, the AS-204 mission. Three astronauts, Lt. Col. Virgil I. Grissom, a veteran of Mercury and Gemini missions; Lt. Col. Edward H. White, the astronaut who had performed the first United States extravehicular activity during the Gemini program; and (Navy LCDR) Roger B. Chaffee, an astronaut preparing for his first space flight, die in this tragic accident.
1973—The Paris Peace Accords are signed, ending U.S. participation in the Vietnam War.
Thanks to CHINFO
Executive Summary:
Leading today's national headlines are reports that a pair of measures to reopen the government as lawmakers from both parties work try to compromise to end the nearly six-week partial shutdown. Noteworthy headlines in the Navy today include NBC News reports that the Secretary of the Navy's announcement to deny all remaining civil claims by individuals exposed to contaminated drinking water at Camp Lejeune in North Carolina.  According to the San Diego Union Tribune, the Navy is commissioning a stealthy $4.6 billion destroyer Saturday at Naval Base North Island in Coronado, with 5,000 people are expected attend the ceremony for the future USS Michael Monsoor (DDG 1001).  Finally, Seapower reports that the LCS Mission Module Program successfully completed shipboard integration testing of two unmanned systems on board USS Independence (LCS 2).
This day in History
January 25
NNNNNNNNNNNNNNNNNNNNNNNNNNNNNNNNNNNNNNNNNNN
Thanks to Don…..Something to get the blood running
Fast Fun
https://www.facebook.com/hangardois/videos/250713095822813/
NNNNNNNNNNNNNNNNNNNNNNNNNNNNNNNNNNNNNNN
Something to watch when the Pro Bowl gets Boring…after the first 5 minutes
Wings Over Vietnam "Hugging The Deck" Documentary
Thanks to Billy & Dave  AND Dr. Rich….
"We wanted to get a little hate and disconnect in the game" …
Excellent video re. the Navy A-4 "Scooter", Naval Aviation training and the role of the A-4 in Vietnam … 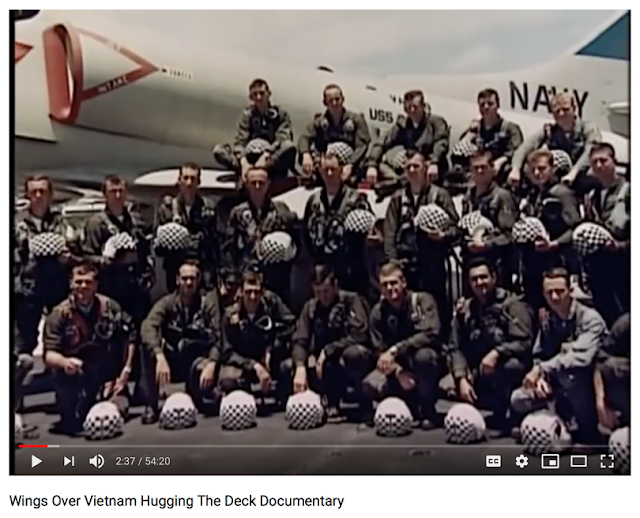 Very interesting, especially when they show the carriers off of Vietnam.  "A-4's Forever" ………..

Last week, we took some friends to a new restaurant, 'Steve's Place,' and noticed that the waiter who took our order carried a spoon in his shirt pocket.     It seemed a little strange.

When the busboy brought our water and utensils, I observed that he also had a spoon in his shirt pocket.    Then I looked around and saw that all the staff had spoons in their pockets. When the waiter came back to serve our soup I inquired, 'Why the spoon?'

'Well,' he explained, 'the restaurant's owner hired Andersen Consulting to revamp all of our processes.  After several months of analysis, they concluded that the spoon was the most frequently  dropped utensil.  It represents a drop frequency of approximately 3 spoons per table per hour.

'If our personnel are better prepared, we can reduce the number of trips back to the kitchen and save 15 man-hours per shift.'

As luck would have it, I dropped my spoon and he replaced it with his spare. 'I'll get another spoon next time I go to the kitchen instead of making an extra trip to get it right now.' I was impressed.

I also noticed that there was a string hanging out of the waiter's fly.

Looking around, I saw that all of the waiters had the same string hanging from their flies. So, before he walked off, I asked the waiter, 'Excuse me, but can you tell me why you have that string right there?'

'Oh, certainly!' Then he lowered his voice.  'Not everyone is so observant.  That consulting firm I mentioned also learned that we can save time in the restroom.   By tying this string to the tip of our you-know-what, we can pull it out without touching it and eliminate the need to wash our hands, shortening the time spent in the restroom by 76.39%.

I asked quietly, 'After you get it out, how do you put it back?'