WASHINGTON – President Donald Trump expressed skepticism Thursday that a congressional committee will agree to his demands for a border wall, raising the specters of another government shutdown or an "emergency declaration" sure to be challenged in court.
Tweeting that "Republicans on the Homeland Security Committee are wasting their time," Trump said that "Democrats, despite all of the evidence, proof and Caravans coming, are not going to give money to build the DESPERATELY needed WALL."
Trump did not specifically cite the prospects of another shutdown or an emergency declaration, but told Republicans "I’ve got you covered" because the "wall is already being built, I don’t expect much help!"
He did not elaborate.

Republicans on the Homeland Security Committee are wasting their time. Democrats, despite all of the evidence, proof and Caravans coming, are not going to give money to build the DESPERATELY needed WALL. I’ve got you covered. Wall is already being built, I don’t expect much help!

The tweet came shortly after Trump changed his terms of debate, now insisting he wants a "wall" on the border, not a "barrier" or "fence."
"Lets just call them WALLS from now on and stop playing political games!," he posted on Twitter. "A WALL is a WALL!"
After weeks of downplaying the stark image of a wall along the U.S.-Mexico border – and saying it could be a less obtrusive "barrier" like a "steel slat fence" – Trump said Thursday he is returning to his original formulation.
The new approach popped up a day after the first meeting of a bipartisan committee of 17 lawmakers on a new border security plan, the key feature of last week's agreement to reopen the government until Feb. 15  following a record-setting shutdown that lasted 35 days.

Lets just call them WALLS from now on and stop playing political games! A WALL is a WALL!

If the committee's plan does not include wall funding to Trump's liking, he can refuse  to sign a new spending plan to keep the government open beyond Feb. 15. That would trigger another partial government shutdown.
Trump has also talked about declaring some sort of national emergency at the border, theoretically allowing him to use military funds for a wall. Democrats, however, have vowed to sue over such a declaration, saying Trump lacks the legal authority to take such a step.
Such a move would tie up the wall debate in court for months or years.
Trump and aides are also trying to develop a public relations plan to influence those congressional negotiations, including next week's State of the Union, a Super Bowl Sunday television interview and possibly another trip to the U.S.-Mexico border.
But Trump's message and terminology has been inconsistent throughout much of the debate. During the 2016 campaign, he reliably used the word "wall" to describe the barrier he wants on the Southwest border. More recently, he has taken to words like "barrier" or "steel slats."
When Congress approved border security money that only allowed the administration to erect previously approved barrier designs, the White House embraced the term "bollard wall," which is a reference to a structure that some have compared to a large, steel fence. 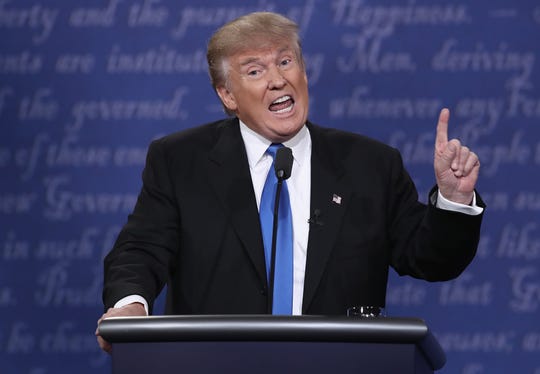 President Donald Trump (Photo: Win McNamee)
The president relied on a less specific terminology just last week when he announced the short term funding agreement to reopen the government. He said he had heard from members of Congress willing to make a deal on border security.
"They have said they are for complete border security, and they have finally and fully acknowledged that having barriers, fencing, or walls – or whatever you want to call it – will be an important part of the solution," Trump said in the Rose Garden.
"We do not need 2,000 miles of concrete wall from sea to shining sea – we never did; we never proposed that; we never wanted that – because we have barriers at the border where natural structures are as good as anything that we can build," Trump said. "They're already there. They've been there for millions of years."

Email ThisBlogThis!Share to TwitterShare to FacebookShare to Pinterest
Labels: It's A Wall, Not Barrier, Rondoids, TRUMP, Waste Of Time