“It can hardly be a coincidence,” wrote Douglas Adams, “that no language on earth has ever produced the expression, ‘As pretty as an airport.’” Oh,...

....Oh, Douglas. If only the fates hadn’t sent you hitchhiking into oblivion mere months before 9/11, you would have known the true story of airport ugliness. The full-body pat-downs. The spiraling scanners from Quantum Leap. The X-ray machines that turn every airport into The House of Male Sterilization. Combine that with the worst food not served at Denny’s and the longest lines outside Pyongyang, and visiting an airport today is like being locked in a 21st-century iron maiden. 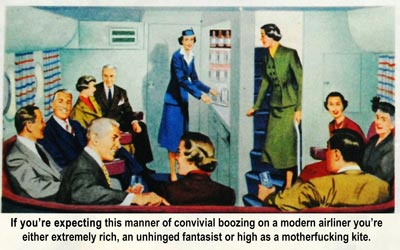 And just wait until you step on the flying buses they dare call airplanes today. Once buckled in, you need to put on the final cheer scene from Bring It On just to get the flight attendant to notice you long enough to order a $7 Miller Lite. And by the third you’ve already got the flight attendant staring down her beak at you, wondering who the fuck you think you are, daring to ask to pay for a fourth Miller Lite.
“Do you really need another beer?” she will ask, as if you just demanded a lighter for your crack-pipe. “Because I think you’ve had quite enough.”
It is for these reasons the airport bar is such a necessity, such a storied and valuable part of flying. They’re not just for lubing up before a flight—they’re there to remind us we are still part of a civilization. Leaning against an airport bar with a beer and a shot of Bulleit is therapy. Your doctor can prescribe Xanax, but only the airport bartender can get you what you need to wash it down with.
It wasn’t always this way. There was a time when you could bring your own booze with you, even if open-container laws prevented you from opening it publicly. Unfortunately, thanks to the al-Qaeda Chemistry Department, those days are long gone. Apparently, terrorists can now blow up planes with any bottle of liquid, so long as it’s bigger than 100ml and isn’t stored in a Ziploc bag.
And no, they don’t make exceptions. In August 2015, according to Time magazine, a Chinese woman found this out the hard way when she went through security with a $200 bottle of Remy Martin XO. When they wouldn’t let her take it through, she drank the entire bottle right before their eyes, collapsed, and was barred from her connection to Wenzhou. 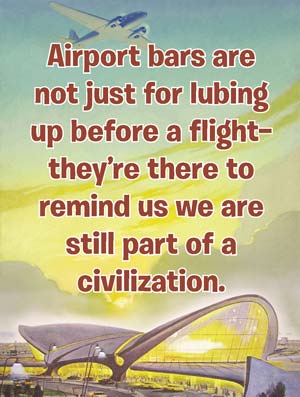