IPhone Era Over? "Ultimately, Apple faces the challenge of trying to sell Cadillacs in a Buick market, and to people with a champagne taste and a beer paycheck!" 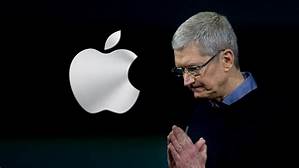 FALLING APPLE Apple loses £44BILLION in value after iPhones get too expensive and China slowdown
Apple's value has plunged since it became the first company worth $1trillion (£800billion) just five months ago
By Harry Pettit, Senior Digital Technology and Science Reporter
3rd January 2019, 9:58 am
Updated: 4th January 2019, 2:21 pm
APPLE's value has plummeted by a staggering £44billion following a shock stock stumble that has rattled Wall Street.
CEO Tim Cook said 'fewer iPhone upgrades' than expected were to blame, as well as economic turmoil in China.
Apple's value has slumped £44billion

In a letter to investors, the 58-year-old revealed that Apple was lowering its projected value for the first time in 16 years.
The firm expects revenue to be £67billion for the quarter, a huge drop from its original estimate of £71-£74billion.
"Today we are revising our guidance for Apple’s fiscal 2019 first quarter, which ended on December 29," Cook wrote.

"...Our revenue will be lower than our original guidance for the quarter, with other items remaining broadly in line with our guidance.
The firm's stock has plunged since it became the first company valued at $1trillion (£800billion) in August
"While it will be a number of weeks before we complete and report our final results, we wanted to get some preliminary information to you now.
"Our final results may differ somewhat from these preliminary estimates."

The iPhone-maker's stock plunged 8% to £116.34 minutes after trading closed on Wednesday evening, wiping £44billion off its total value.
It marks a low point in the dramatic slump in Apple's value since it became the first company worth $1trillion (£800billion) last August.

It is now valued at less than £600billion – equivalent to losing the combined value of
Netflix (£93billion), Sony (£50billion), Nintendo (£31billion), Twitter (£22billion) and Snapchat (£6billion).

Apple released the iPhone XS and XS Max in September

Cook blamed Apple's poor quarter on a drop in the number of people getting iPhone upgrades, as well as China's wobbling smartphone market.
"As the climate of mounting uncertainty weighed on financial markets, the effects appeared to reach consumers as well, with traffic to our retail stores and our channel partners in China declining as the quarter progressed," he wrote.

"And market data has shown that the contraction in Greater China’s smartphone market has been particularly sharp."

Tech industry expert Elliot Lutzker told The Sun that Apple's stock slump is a major concern for the company.
"Apple remains a giant in the tech sector, even after the slump today. But there are major concerns," he said.

"Apple’s growth was based on continually-expanding sales and then, in recent years, on increasing prices across product lines.

"But many wised up consumers
are unwilling to pay $1,000 (an amount equal to the median monthly mortgage payment for homeowners in the United States) every two years for Apple’s base model smartphone."
"In addition, Apple has stiff competition from smartphone makers and other tech companies in China amid a slowing global economy.

"Ultimately, Apple faces the challenge of trying to sell Cadillacs in a Buick market, and to folks with a champagne taste and a beer paycheck!"
Despite its stock drop, Apple's value still puts the rest of the tech industry to shame.

Its closest rival, Samsung, is worth just £180 billion – less than a third of Apple's market value.
Posted by Ron Ernie at 11:56

Email ThisBlogThis!Share to TwitterShare to FacebookShare to Pinterest
Labels: Era, IPhone, over, Rondoids