Ted Williams was John Glenn's wingman on F-9Fs in Korea.
The Boston Red Sox slugger, who wore No. 9 as a major leaguer, would now be assigned to an F-9 Panther jet as a pilot. Ted flew a total of 39 combat missions in Korea. He was selected by his commander John Glenn (later the astronaut, senator, and 'septuagenonaut') to fly as Glenn's wingman.
While flying an air strike on a troop encampment near Kyomipo, Williams' F-9 was hit by hostile ground fire. Ted commented later: "The funny thing was I didn't feel anything. I knew I was hit when the stick started shaking like mad in my hands. Then everything went out, my radio, my landing gear, everything. The red warning lights were on all over the plane." The F-9 Panther had a centrifugal flow engine and normally caught fire when hit. The tail would literally blow off most stricken aircraft. The standard orders were to eject from any Panther with a fire in the rear of the plane. Ted's aircraft was indeed on fire, and was trailing smoke and flames. Glenn and the other pilots on the mission were yelling over their radios for Williams to get out. However, with his radio out, Williams could not hear their warnings and he could not see the condition of the rear of his aircraft. Glenn and another Panther flown by Larry Hawkins came up alongside Williams and lead him to the nearest friendly airfield. Fighting to hold the plane together, Ted brought his Panther in at more than 200-MPH for a crash landing on the Marsden-matted strip. With no landing gear, dive brakes, or functioning flaps, the flaming Panther jet skidded down the runway for more than 3000 feet. Williams got out of the aircraft only moments before it was totally engulfed in flames. Ted Williams survived his tour of duty in Korea and returned to major league baseball.
Pssst: Ted missed out flying combat missions during WW II, because his flying and gunnery skills were so good that he was kept as an instructor for much of the War. During advanced training at Pensacola, Florida Ted would accurately shoot the sleeve targets to shreds while shooting out of wing-overs, zooms, and barrel rolls. He broke the all time record for 'hits' at the school. Following Pensacola, Ted was sent to Jacksonville for advanced gunnery training. This is the payoff test for potential combat pilots. Ted set all the records for reflexes, coordination, and visual reaction time. As a result of his stunning success he was made an instructor at Bronson field to put Marine aviation cadets through their final paces. By 1945 Ted got his wish and was finally transferred to a combat wing, but weeks later the War was over. He was discharged from the military in December of 1945. Seven years later, in December of 1952, Ted was recalled to active duty as a Marine Corps fighter pilot.
NNNNNNNNNNNNNNNNNNNNNNNNNNNNNNNNNNNNNNNNNNN
Thanks to Chuck..If you want to read the whole report you can to the site and sign up.
Yowser !!!

http://aviationweek.com/business-aviation/near-catastrophe-within-feet-becoming-worst-air-disaster?NL=AW-05&Issue=AW-05_20181127_AW-05_882&sfvc4enews=42&cl=article_3&utm_rid=CPEN1000001170759&utm_campaign=17524&utm_medium=email&elq2=c8cfd737aa8f49cfa2bdd3e474d4418c
A Near Catastrophe:  Within Feet of Becoming the Worst Air Disaster
Just before midnight on July 7, 2017, an Air Canada Airbus A320 came within a few seconds of landing atop a line of four airliners waiting on a parallel taxiway to take off from Runway 28R at San Francisco International Airport (KSFO). Were it not for alerts from two of the waiting crews and instantaneous corrective action, the resulting carnage would likely have been massive and the human suffering incalculable.
The incident occurred in clear weather. Crews in the airplanes sitting on Taxiway C — a United Boeing 787, a Philippine Airlines Airbus A340, another United 787 and a United Boeing 737 — could see a stream of inbound aircraft at least 15 mi. long. The waiting crews were impatient. Departure delays were running at least 30 min. because Runway 28L was closed for construction, thus arrivals and departures were sharing 28R.
Air Canada Flight 759 from Toronto with a crew of five and 135 passengers was on a 1-mi. final completing the FMS Bridge Visual Approach to 28R (see the approach plate). The Airbus had been cleared to land on 28R, but something just didn't look right to the crews of the first two airplanes waiting on the taxiway. The Airbus seemed to be heading right at them.
The captain of the first airplane in the taxiway queue (UAL Flight 1), thumbed his mic and said, "Where is that guy going?" The crew of Philippine Airlines (PAL Flight 115) saw what was happening and selected their lights to TAKEOFF mode thus lighting the taxiway before them along with the empennage of UAL 1. 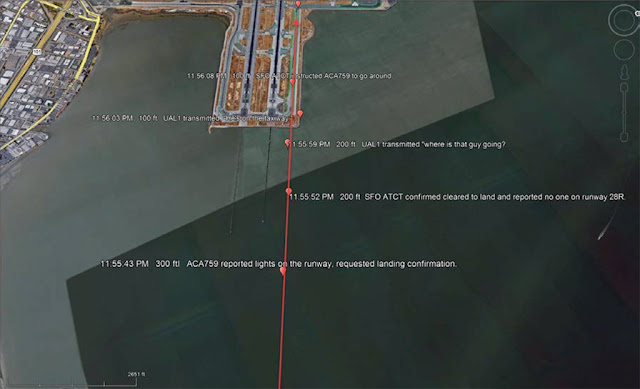 Radar plot that depicts the location of ACA759 from the time the flight reported light on the runway until the flight was issued a go-around by SFO ATCT. Credit: Google Earth
The Air Canada Airbus descended to 100 ft. AGL and roared over the first United 787. At that point the tower controller realized what was happening and ordered the Airbus to go missed, but by then the Airbus crew had realized their mistake and begun a go-around. Still, the Air Canada aircraft continued to descend to a minimum altitude of about 60 ft. AGL as it overflew the second airplane on the taxiway, clearing the A340's tail by about 20 ft. before it started to climb.
No one was hurt, no metal was bent, but the system had come close to total failure, putting hundreds of people at risk.
NNNNNNNNNNNNNNNNNNNNNNNNNNNNNNNNNNNNNNNNNNNNN
Thanks to  Carl
Trump's behavior toward military 'disturbing': Retired Gen. Stanley McChrystal - ABC News
The fact he dedicated his book to John Lewis (a Rep not Sen) and John McCain tells one all they need to know!!
https://abcnews.go.com/Politics/trumps-behavior-military-disturbing-retired-gen-stanley-mcchrystal/story?id=59442288
NNNNNNNNNNNNNNNNNNNNNNNNNNNNNNNNNNNNNNNN
thanks to Cindy - 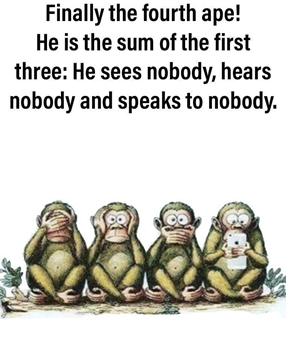