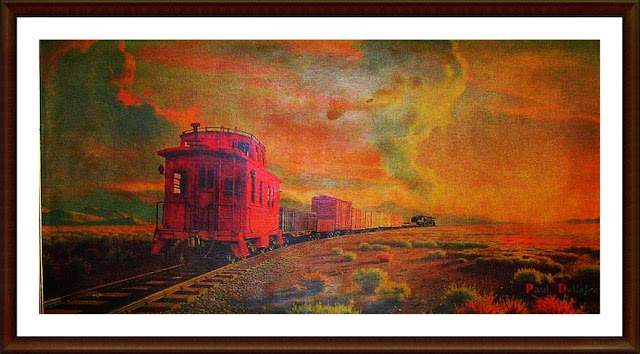 He headed for the cashier's counter,
hoping that the curtain rods he was carrying were the ones she wanted,
when he saw the painting for the first time.
He'd been in this store dozens of times but he'd never noticed those pictures before.
He wasn't an art critic, but he knew he'd never seen anything like that train picture.

The surface of the picture was textured to look like a genuine oil painting,
and somehow that scene looked more real than life!
The silver steam from the old engine glowing in the sunset,
billowing against the yellow-blue-orange-pink sky,
the brightly colored, but weather worn railroad cars,
and the red caboose, so real you could almost step right into it.
Each piece of gravel along the track,
each clump of vegetation on the prairie was clearly defined,
and cast a long late afternoon shadow.

The mountains were a blue haze against the distant horizon.
It was a painting you could stare at for a long time,
finding details previously overlooked.

A bell rang. The store was closing.
On impulse he hurried to the customer service desk and put the picture on layaway
with five dollars that should have gone to overdue bills.
He didn't know when he'd be able to manage the eleven-ninety-five balance.
He paid for the curtain rods and went home, feeling a little guilty.
*      *      *
She stood back and looked critically at the curtains she'd hung.
He told her that they made a big difference in the little apartment.
She smiled and said that the curtains looked better than the trash cans in the alley.

He held her and said he wished he could provide her with a better home,
and she said that they weren't doing too badly for newlyweds,
and that she believed in him.
He didn't mention the money he'd foolishly spent on a picture of a train.

Payday again, and another losing battle with arithmetic.
If only a tree or a patch of grass could be seen from their window,
it might raise their spirits. It would interrupt the drabness.
He felt sorry for her, being stuck there all day.
At least taking the bus to the factory everyday gave him a change of scene.
These were his thoughts as he paid the cashier
and waited for the large picture to be wrapped.

He centered it carefully on the wall over the chair with the broken spring,
and called her to come in from the kitchenette and take a look at the surprise.
Wiping her hands on her apron, she glanced around the room
until her eyes stopped at the explosion of color. She almost cried!
It was like having a window to a valley locked in sunset.
They held hands and stared at the painting until dinner almost burned.

Years struggled by,
and the broken spring chair was replaced by a new living room suite,
complete with payment book.
They moved several times in the course of their lives,
first to a couple of larger apartments,
then to a house in a suburban development,
and finally back to another cheap apartment,
where they were to spend their final years.

The infirmities of old age often require a tightening of purse strings,
but they weren't complaining. They'd been through rough times before.
Through the years they'd managed to hang on to two treasures:
the Sunset Train painting and their love for each other.
Maybe they weren't so poor after all.

It hit him hard when she passed away.
Somehow, he'd always imagined he'd be the first to go.
He wasn't prepared for the  emptiness. Nobody ever is.

He took the habit of talking to her, even though she was gone.
He'd stare at the painting and go over old times.
Sometimes he'd sit for hours in front of the television,
but his eyes would wander back to the Sunset Train.
He'd imagine that they were together in that valley, or riding on the train.

The neighbors often dropped in to check on him.
Conversations always gravitated to the painting.
Several days passed before they noticed the mail and newspapers outside his door.
Fearing the old man had died,
and after getting no answer to their knocking and calling,
the neighbors set their shoulders to the door and the old wood gave way.
Finding no one in the apartment, clothes intact in the closets, and the TV left on,
the neighbors notified the police of his disappearance.

While the premises were being inspected, an officer commented to a neighbor,
"Unusual painting in there! Realistic, I mean!"
"Yeah," replied the other, "everybody remarks about that train picture."
"No," said the policeman, "I'm talkin' about that picture of the valley and the sunset.
There's a track runnin' through it, but no train."

And he was right. The train was gone.