Last Friday, President Donald J. Trump traveled to Kansas City, Missouri, to speak at the Project Safe Neighborhoods Conference. The goal of the visit was simple: to show appreciation for our great law enforcement officials and help revive a program with a record of effective crime prevention in American communities.

“Everyone here today is committed to the same vital goal: liberating our communities from crime and securing the right of all citizens to live in safety and to live in peace,” the President said to an audience of men and women in law enforcement.

Restoring respect for our law enforcement is essential. “For too long, many politicians and radical activists have been smearing and slandering our police, making life easier for criminals and harder for law-abiding Americans,” the President explained. The results of this renewed commitment have begun to show: This year, an all-time record has been set for prosecution of violent crimes. And in a remarkable turnaround, murder rates in America’s largest cities are projected to drop by more than 8 percent compared to 2016.

“You keep America safe. And you maybe don’t hear it enough, or sometimes don’t feel it enough: You do an incredible job,” President Trump said. “We stand with you 100 percent.”
See the President’s full remarks at the 2018 Project Safe Neighborhoods National Conference

The Commander in Chief presided over a coin flip between historic rivals at this year’s Army-Navy football game in Philadelphia, Pennsylvania.

Flanked by Secretary of Defense James Mattis, President Trump flipped the coin in favor of the Navy football team—but Army ultimately took the win. The Army and Navy football teams have faced off on the gridiron nearly every year since 1890, and with President Trump’s appearance over the weekend, he becomes the 10th Commander in Chief to attend the game.

“It was my honor to attend today’s #ArmyNavyGame in Philadelphia. A GREAT game played all around by our HEROES. Congratulations @ArmyWP_Football on the win!” the President tweeted. 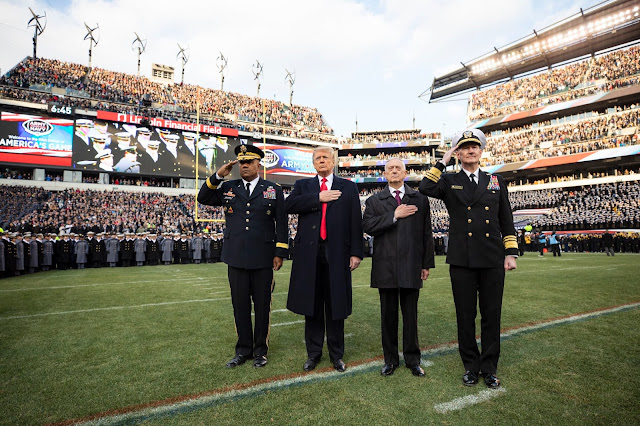