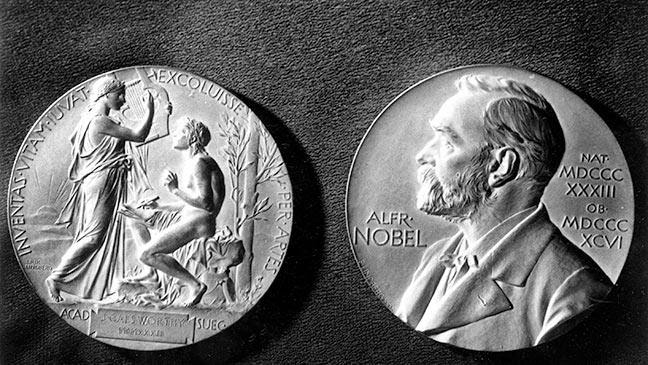 The first Nobel Prizes are awarded in Stockholm, Sweden, in the fields of physics, chemistry, medicine, literature, and peace. The ceremony came on the fifth anniversary of the death of Alfred Nobel, the Swedish inventor of dynamite and other high explosives. In his will, Nobel directed that the bulk of his vast fortune be placed in a fund in which the interest would be “annually distributed in the form of prizes to those who, during the preceding year, shall have conferred the greatest benefit on mankind.” Although Nobel offered no public reason for his creation of the prizes, it is widely believed that he did so out of moral regret over the increasingly lethal uses of his inventions in war.

Alfred Bernhard Nobel was born in Stockholm in 1833, and four years later his family moved to Russia. His father ran a successful St. Petersburg factory that built explosive mines and other military equipment. Educated in Russia, Paris, and the United States, Alfred Nobel proved a brilliant chemist. When his father’s business faltered after the end of the Crimean War, Nobel returned to Sweden and set up a laboratory to experiment with explosives. In 1863, he invented a way to control the detonation of nitroglycerin, a highly volatile liquid that had been recently discovered but was previously regarded as too dangerous for use. Two years later, Nobel invented the blasting cap, an improved detonator that inaugurated the modern use of high explosives. Previously, the most dependable explosive was black powder, a form of gunpowder.

Nitroglycerin remained dangerous, however, and in 1864 Nobel’s nitroglycerin factory blew up, killing his younger brother and several other people. Searching for a safer explosive, Nobel discovered in 1867 that the combination of nitroglycerin and a porous substance called kieselguhr produced a highly explosive mixture that was much safer to handle and use. Nobel christened his invention “dynamite,” for the Greek word dynamis, meaning “power.” Securing patents on dynamite, Nobel acquired a fortune as humanity put his invention to use in construction and warfare.

In 1875, Nobel created a more powerful form of dynamite, blasting gelatin, and in 1887 introduced ballistite, a smokeless nitroglycerin powder. Around that time, one of Nobel’s brothers died in France, and French newspapers printed obituaries in which they mistook him for Alfred. One headline read, “The merchant of death is dead.” Alfred Nobel in fact had pacifist tendencies and in his later years apparently developed strong misgivings about the impact of his inventions on the world. After he died in San Remo, Italy, on December 10, 1896, the majority of his estate went toward the creation of prizes to be given annually in the fields of physics, chemistry, medicine, literature, and peace. The portion of his will establishing the Nobel Peace Prize read, “[one award shall be given] to the person who has done the most or best work for fraternity among nations, for the abolition or reduction of standing armies, and for the holding and promotion of peace congresses.” Exactly five years after his death, the first Nobel awards were presented.

The Royal Swedish Academy of Sciences decides the prizes in physics, chemistry, and economic science; the Swedish Royal Caroline Medico-Surgical Institute determines the physiology or medicine award; the Swedish Academy chooses literature; and a committee elected by the Norwegian parliament awards the peace prize. The Nobel Prizes are still presented annually on December 10, the anniversary of Nobel’s death. In 2006, each Nobel Prize carried a cash prize of nearly $1,400,000 and recipients also received a gold medal, as is the tradition.

HOLLYWOOD
2009
Avatar makes its world premiere
On this day in 2009, “Avatar,” a 3-D science-fiction epic helmed by “Titanic” director James Cameron, makes its world debut in London and goes on to become the highest-grossing movie in history. Starring Sam Worthington, Zoe Saldana and Sigourney Weaver, the box-office mega-hit ...

GENERAL INTEREST
1974
Sex scandal involving Arkansas politician
Representative Wilbur D. Mills, a Democrat from Arkansas, resigns as chairman of the Ways and Means Committee in the aftermath of the first truly public sex scandal in American politics. On October 7, 1974, at 2 a.m., Mills was stopped by Washington park police while driving at ...