A group of Central American migrants marched to
a border crossing in Tijuana Thursday waving
White Flags to demand better conditions and
push to enter the U.S. !

Mexican police watched closely as authorities from the
National Human Rights Commission and the Grupo Beta migrant support agency told the migrants their needs would be addressed.

They urged them to apply for humanitarian visas in Mexico and seek
work in Tijuana, where they said thousands of jobs were available.
But Oscar Rodriguez, 22, of Colon, Honduras, said he was still set
on convincing "the United States to open its doors to us." 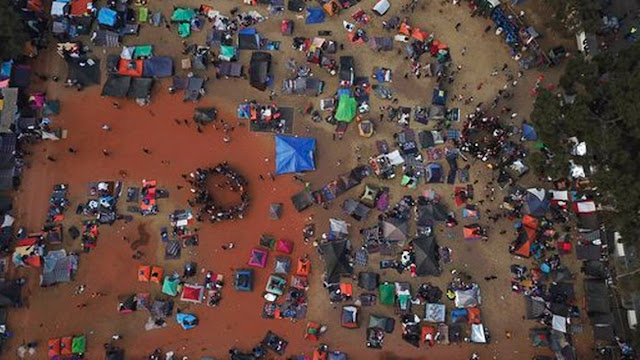 Several thousand Central American migrants arrived in Tijuana
last week more than a month after leaving Honduras in a caravan.
The U.S. government only processes about 100 asylum applications
per day at Tijuana's main crossing to San Diego and there were already several thousand migrants on a waiting list. Some outspoken Tijuana residents have given the migrants a cold reception leaving them stuck between the city, whose mayor said they aren't wanted, and a U.S. president who is trying to keep them out.

Rodriguez said U.S. meddling in Honduran politics had created conditions that made it impossible to him to live there.
"Thousands more people are going to continue coming because the United States is a government that sticks its hands into Central American governments," Rodriguez said. He said Honduran President Juan Orlando Hernandez, who was re-elected in a disputed result last year, is the United States-chosen president.

The U.S. government was quick to recognize Hernandez's victory
despite widespread allegations of irregularities. Rodriguez, who works
in private security, blamed Hernandez for violently repressing demonstrations against his government.

But one needs to be wary of these White Flaggers!
Here's a good message to keep in mind!