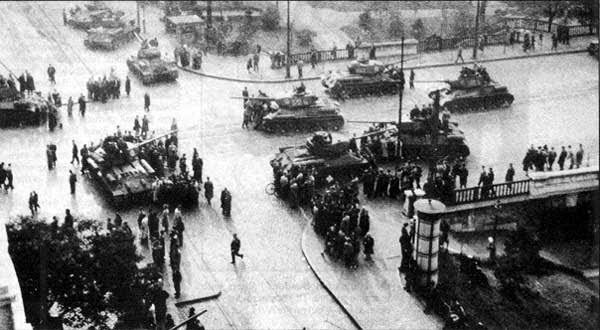 A spontaneous national uprising that began 12 days before in Hungary is viciously crushed by Soviet tanks and troops on this day in 1956. Thousands were killed and wounded and nearly a quarter-million Hungarians fled the country.

The problems in Hungary began in October 1956, when thousands of protesters took to the streets demanding a more democratic political system and freedom from Soviet oppression. In response, Communist Party officials appointed Imre Nagy, a former premier who had been dismissed from the party for his criticisms of Stalinist policies, as the new premier. Nagy tried to restore peace and asked the Soviets to withdraw their troops. The Soviets did so, but Nagy then tried to push the Hungarian revolt forward by abolishing one-party rule. He also announced that Hungary was withdrawing from the Warsaw Pact (the Soviet bloc’s equivalent of NATO).

On November 4, 1956, Soviet tanks rolled into Budapest to crush, once and for all, the national uprising. Vicious street fighting broke out, but the Soviets’ great power ensured victory. At 5:20 a.m., Hungarian Prime Minister Imre Nagy announced the invasion to the nation in a grim, 35-second broadcast, declaring: “Our troops are fighting. The Government is in place.” Within hours, though, Nagy sought asylum at the Yugoslav Embassy in Budapest. He was captured shortly thereafter and executed two years later. Nagy’s former colleague and imminent replacement, János Kádár, who had been flown secretly from Moscow to the city of Szolnok, 60 miles southeast of the capital, prepared to take power with Moscow’s backing.

The Soviet action stunned many people in the West. Soviet leader Nikita Khrushchev had pledged a retreat from the Stalinist policies and repression of the past, but the violent actions in Budapest suggested otherwise. An estimated 2,500 Hungarians died and 200,000 more fled as refugees. Sporadic armed resistance, strikes and mass arrests continued for months thereafter, causing substantial economic disruption. Inaction on the part of the United States angered and frustrated many Hungarians. Voice of America radio broadcasts and speeches by President Dwight D. Eisenhower and Secretary of State John Foster Dulles had recently suggested that the United States supported the “liberation” of “captive peoples” in communist nations. Yet, as Soviet tanks bore down on the protesters, the United States did nothing beyond issuing public statements of sympathy for their plight.

GENERAL INTEREST
2008
Barack Obama elected as America’s first black president
On this day in 2008, Senator Barack Obama of Illinois defeats Senator John McCain of Arizona to become the 44th U.S. president, and the first African American elected to the White House. The 47-year-old Democrat garnered 365 electoral votes and nearly 53 percent of the popular ...

MUSIC
1978
Anne Murray earns a #1 pop hit with “You Needed Me”
Disco was at the absolute zenith of its popularity in 1978, and with the likes of even Barbra Streisand, Frankie Valli and Rod Stewart falling under its intoxicating spell, the party showed no signs of letting up. But then along came Anne Murray, a Canadian balladeer whose ...

GENERAL INTEREST
1922
Entrance to King Tut’s tomb discovered
British archaeologist Howard Carter and his workmen discover a step leading to the tomb of King Tutankhamen in the Valley of the Kings in Egypt.When Carter first arrived in Egypt in 1891, most of the ancient Egyptian tombs had been discovered, though the little-known King ...

GENERAL INTEREST
1995
Yitzhak Rabin assassinated
Israeli Prime Minister Yitzhak Rabin is fatally shot after attending a peace rally held in Tel Aviv’s Kings Square in Israel. Rabin later died in surgery at Ichilov Hospital in Tel Aviv.The 73-year-old prime minister was walking to his car when he was shot in the arm and the back ...

GENERAL INTEREST
1979
Iranians storm U.S. embassy
Student followers of the Ayatollah Khomeini send shock waves across America when they storm the U.S. embassy in Tehran. The radical Islamic fundamentalists took 90 hostages. The students were enraged that the deposed Shah had been allowed to enter the United States for medical ...