Homeless Veteran’s Story Led to a $400,000
GoFundMe Page  Which Prosecutors Say Was A Lie!

A couple’s feel-good story, about a homeless veteran who had helped a woman after she ran out of gas on a highway exit ramp, reverberated widely, drawing high-profile media appearances and more than $400,000 in donations the couple said would go to help the veteran.

On Thursday, the last vestiges of the story appeared to come tumbling down after law enforcement officials in New Jersey announced theft charges against all three individuals: the couple, Kate McClure and Mark D’Amico, as well as Johnny Bobbitt,
the homeless man they said they were going to support
with the money that had flowed in.

Officials said the trio’s story, which was published on GoFundMe with the title “Paying it Forward,” in November 2017, was all a ruse, a conspiracy on the part of all three to commit theft.

“The entire campaign was predicated on a lie,” Scott A. Coffina,
the prosecutor of Burlington County in New Jersey,
said at a news conference on Thursday. 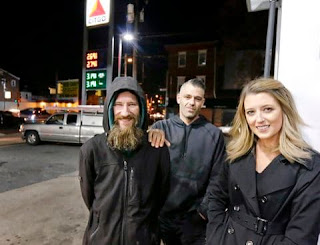