The List 4856 TGB
To All
Today is the Marines 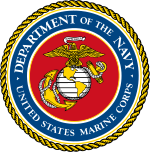 (It Did Not Get To RonDoids)