President Donald J. Trump believes in standing up for America’s veterans—both during our National Anthem and through the care and support our Government provides them with each and every day.
“Together, we will honor those who defend us. We will cherish those who protect us. And we will celebrate the amazing heroes who keep America safe and strong and proud and free,” President Trump said today. “To every veteran and military family across our land, I want to express the eternal gratitude and thanks of our entire Nation.”
Earlier today, the President and First Lady Melania Trump visited the Marine Barracks in Washington, D.C., thanking service members and providing them with desserts in honor of the Thanksgiving holiday next week. The First Couple also spent time with the Marines who bravely responded to a building fire at the Arthur Senior Public Housing complex in Washington on September 19.
Later in the afternoon, President Trump hosted veterans and military families at the White House in celebration of National Veterans and Military Families Month. He took time during the event to explain his commitment to our country’s heroes:

The turkeys are coming!

Next week, President Trump will continue the time-honored White House tradition of officially pardoning the National Thanksgiving Turkey. Before he does, Americans will vote on which turkey he pardons. 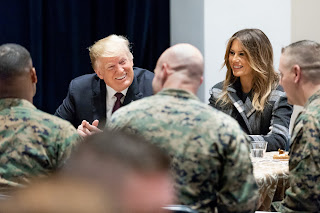