"We were given space on the tarmac in the STEM section which was intended [to get] kids interested in science, technology, engineering, and mathematics," said Robert Cruz, KE4MCL. "We were allowed to bring two of our field station vehicles right up to the tent and set up their free-standing masts."
The club fielded operating positions on HF through UHF, slow-scan TV, and satellites for special event station W4H. "All three stations were active during the event. Since we set up early on Friday, we operated fully off solar power that day as the onsite generator was not to be fired up until the weekend," Cruz explained. He said arriving on Friday offered an additional benefit. "The setup crew got to see most of the air show, plus some cool behind the scenes stuff, minus about 100,000 people," he quipped.

"Since this was a military airshow, I brought along a Collins R-388 and a BC-348 just for show and tell," Cruz recounted. "We had a few veterans come around and talk to us about how they used to operate one of these while [in the service]."

Cruz said a highlight of the weekend was a contact by Steve Taylor, W1HQL, with a crew member of the International Space Station. "The ISS had a scheduled school contact, and once they got out of range of the school, Steve called on a whim and the ISS responded for a quick QSO," Cruz said.

He said the club, which is headquartered in Homestead, tried something a little different at this year's air show. "Traditionally, Amateur Radio displays are filled with call signs and terminology that the general public doesn't understand," he said. "To a non-ham, a call sign looks like a license plate number, for example. We created a new banner targeted at those interested in preparedness and made sure it had plain English and not 'hamspeak' on it."
The club also created a half-page handout with the club's information and meeting time on it for visitors to take home instead of relying on having to look things up online. "We shall see if the new banner and handouts paid off at the next club meeting," Cruz said. 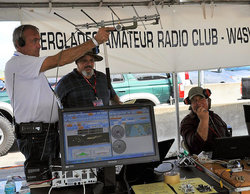