Rondoids Has Been Able To
Obtain an Exclusive Photo of
CNN Reporter Jim Acosta
Refusing To Give Up Microphone
at President Trumps Press Conference
This Afternoon.

The Coward Was Actually Pushing

The Young Female Staffer Away As She

Was Trying To Do Her Job.

And This Just in, 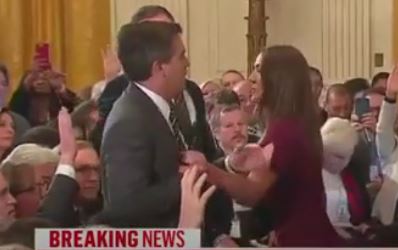 When Will CNN Call Off This Stooger
and Put Him Back On
Rest Room Detail Where He Belongs.
Isn't CNN Supposed to Be All About
Equal Rights And Women's Rights?
Boycott CNN Till They Rid
Themselves of This Coward

Here Is An Official White House Photo
of The News Conference Below.

As a Side Note:

President Trump and the free press

CBS’ Major Garrett put it crisply: “There is more access to this president than Obama . . . We see him and interact with him and punch in questions with far more frequency.” ABC News Political Director Rick Klein agrees, saying President Trump is “above and beyond, far and away more accessible” than our previous two presidents.
at November 07, 2018