To All Our Friends in Canada - "Happy Thanksgiving" - What is it? How did it start? 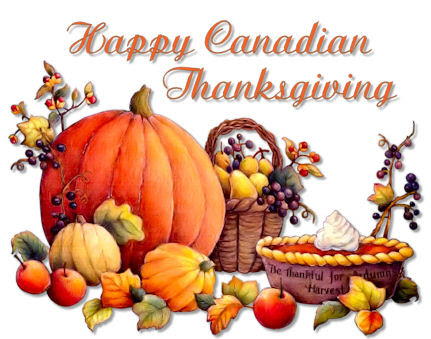 Thanksgiving (French: Action de grâce), or Thanksgiving Day (Jour de l'action de grâce) is an annual Canadian holiday, occurring on the second Monday in October, which celebrates the harvest and other blessings of the past year.

Thanksgiving has been officially celebrated as an annual holiday in Canada since November 6, 1879.[2] While the date varied by year and was not fixed, it was commonly the third Monday in October.

On January 31, 1957, the Governor General of Canada Vincent Massey issued a proclamation stating: "A Day of General Thanksgiving to Almighty God for the bountiful harvest with which Canada has been blessed – to be observed on the second Monday in October."

Statutory holiday
Thanksgiving is a statutory holiday in most of Canada, with the exceptions being the Atlantic provinces of Prince Edward Island, Newfoundland and Labrador, New Brunswick, and Nova Scotia, where it is an optional holiday.[4] Companies that are regulated by the federal government (such as those in the telecommunications and banking sectors) recognize the holiday regardless of its provincial status.

While the actual Thanksgiving holiday is on a Monday, Canadians may gather for their Thanksgiving feast on any day during the long weekend. Foods traditionally served at Thanksgiving include roasted turkey, stuffing, mashed potatoes with gravy, sweet potatoes, cranberry sauce, sweet corn, various autumn vegetables (mainly various kinds of squashes but also Brussels sprouts), and pumpkin pie. Baked ham and apple pie are also fairly common, and various regional dishes and desserts may also be served, including salmon, wild game, butter tarts, and Nanaimo bars.

Kitchener-Waterloo Oktoberfest holds a Thanksgiving parade on the holiday; it is broadcast on CTV on tape-delay. The parade consists of floats, civic figures in the region, local performance troupes and marching bands.[10]

Canadian Thanksgiving coincides with the observance in the United States of Columbus Day and Indigenous Peoples' Day and has done so since the US implemented the Uniform Monday Holiday Act in 1971 (most countries in the Western Hemisphere fix Columbus Day to October 12). As such, American towns with high levels of Canadian tourism will often hold their fall festivals over Thanksgiving/Columbus Day weekend, in part to draw and accommodate Canadian tourists; Ellicottville, New York's Fall Festival has been identified as an "annual pilgrimage" for Canadians.[11] Border towns also often experience an uptick in shoppers at grocery stores, as Canadian shoppers take advantage of lower sales taxes and commodity prices in the United States over the long holiday.[12] The U.S. also has its own Thanksgiving, but on the fourth Thursday in November.

Canadian troops attend a Thanksgiving service in the bombed-out Cambrai Cathedral, in France in October 1918

According to some historians, the first celebration of Thanksgiving in North America occurred during the 1578 voyage of Martin Frobisher from England, in search of the Northwest Passage.[2] His third voyage, to the Frobisher Bay area of Baffin Island in the present Canadian Territory of Nunavut, set out with the intention of starting a small settlement. His fleet of fifteen ships was outfitted with men, materials, and provisions. However, the loss of one of his ships through contact with ice, along with many of the building materials, was to prevent him from doing so. The expedition was plagued by ice and freak storms, which at times scattered the fleet; on meeting again at their anchorage in Frobisher Bay, "... Mayster Wolfall, a learned man, appointed by Her Majesty's Counsel to be their minister and preacher, made unto them a godly sermon, exhorting them especially to be thankful to God for their strange and miraculous deliverance in those so dangerous places ...". They celebrated Communion and "The celebration of divine mystery was the first sign, scale, and confirmation of Christ's name, death and passion ever known in all these quarters."[13] (The notion of Frobisher's service being first on the continent has come into dispute, as Spaniards conducted similar services in Spanish North America during the mid-16th century, decades before Frobisher's arrival.
Years later, French settlers, having crossed the ocean and arrived in Canada with explorer Samuel de Champlain, from 1604, also held feasts of thanks. They even formed the Order of Good Cheer and held feasts with their First Nations neighbours, at which food was shared.

After the Seven Years' War ended in 1763, with New France handed over to the British, the citizens of Halifax held a special day of Thanksgiving. Thanksgiving days were observed beginning in 1799 but did not occur every year.
During and after the American Revolution, American refugees who remained loyal to Great Britain moved from the newly independent United States to Canada. They brought the customs and practices of the American Thanksgiving to Canada, such as the turkey, pumpkin, and squash.

The first Thanksgiving Day after Canadian Confederation was observed as a civic holiday on April 5, 1872, to celebrate the recovery of the Prince of Wales (later King Edward VII) from a serious illness.


For many years before it was declared a national holiday in 1879, Thanksgiving was celebrated in either late October or early November. From 1879 onward, Thanksgiving Day has been observed every year, the date initially being a Thursday in November.[20] After World War I, an amendment to the Armistice Day Act established that Armistice Day and Thanksgiving would, starting in 1921, both be celebrated on the Monday of the week in which November 11 occurred.[19] Ten years later, in 1931, the two days became separate holidays, and Armistice Day was renamed Remembrance Day. From 1931 to 1957, the date was set by proclamation, generally falling on the second Monday in October, except for 1935, when it was moved due to a general election.[16][19] In 1957, Parliament fixed Thanksgiving as the second Monday in October.[19] The theme of the Thanksgiving holiday also changed each year to reflect an important event to be thankful for. In its early years it was for an abundant harvest and occasionally for a special anniversary.