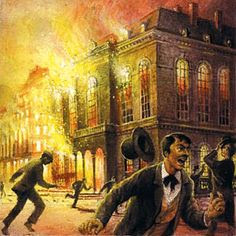 On this day in 1871, flames spark in the Chicago barn of Patrick and Catherine O’Leary, igniting a two-day blaze that kills between 200 and 300 people, destroys 17,450 buildings, leaves 100,000 homeless and causes an estimated $200 million (in 1871 dollars; $3 billion in 2007 dollars) in damages. Legend has it that a cow kicked over a lantern in the O’Leary barn and started the fire, but other theories hold that humans or even a comet may have been responsible for the event that left four square miles of the Windy City, including its business district, in ruins. Dry weather and an abundance of wooden buildings, streets and sidewalks made Chicago vulnerable to fire. The city averaged two fires per day in 1870; there were 20 fires throughout Chicago the week before the Great Fire of 1871.

Despite the fire’s devastation, much of Chicago’s physical infrastructure, including its water, sewage and transportation systems, remained intact. Reconstruction efforts began quickly and spurred great economic development and population growth, as architects laid the foundation for a modern city featuring the world’s first skyscrapers. At the time of the fire, Chicago’s population was approximately 324,000; within nine years, there were 500,000 Chicagoans. By 1893, the city was a major economic and transportation hub with an estimated population of 1.5 million. That same year, Chicago was chosen to host the World’s Columbian Exposition, a major tourist attraction visited by 27.5 million people, or approximately half the U.S. population at the time.

In 1997, the Chicago City Council exonerated Mrs. O’Leary and her cow. She turned into a recluse after the fire, and died in 1895.

GENERAL INTEREST
2014
First person in U.S. diagnosed with Ebola dies
On this day in 2014, Thomas Eric Duncan, the first person diagnosed with a case of the Ebola Virus Disease in the U.S., dies at age 42 at Texas Health Presbyterian Hospital in Dallas. Shortly before his death, Duncan, who lived in Liberia, had traveled to America from West ...

CRIME
2009
Self-help guru’s sweat lodge ceremony turns deadly
On this day in 2009, two people die and more than a dozen others are hospitalized following a botched sweat lodge ceremony at a retreat run by motivational speaker and author James Arthur Ray near Sedona, Arizona. A third participant in the ceremony died nine days later.The sweat ...

GENERAL INTEREST
2005
Massive earthquake hits Kashmir region
On this day in 2005, a massive 7.6-magnitude earthquake strikes the Kashmir border region between India and Pakistan. An estimated 70,000 people—nearly half of them children—were killed and 70,000 more were injured. More than 3 million were left homeless and without food and ...

MUSIC
1957
Jerry Lee Lewis records “Great Balls Of Fire” in Memphis, Tennessee
Jerry Lee Lewis was not the only early rock-and-roller from a strict Christian background who struggled to reconcile his religious beliefs with the moral implications of the music he created. He may have been the only one to have one of his religious crises caught on tape, ...

GENERAL INTEREST
1967
Che Guevara defeated
A Bolivian guerrilla force led by Marxist revolutionary Che Guevara is defeated in a skirmish with a special detachment of the Bolivian army. Guevara was wounded, captured, and executed the next day.Born in Argentina, Guevara believed that a man of action could revolutionize a ...