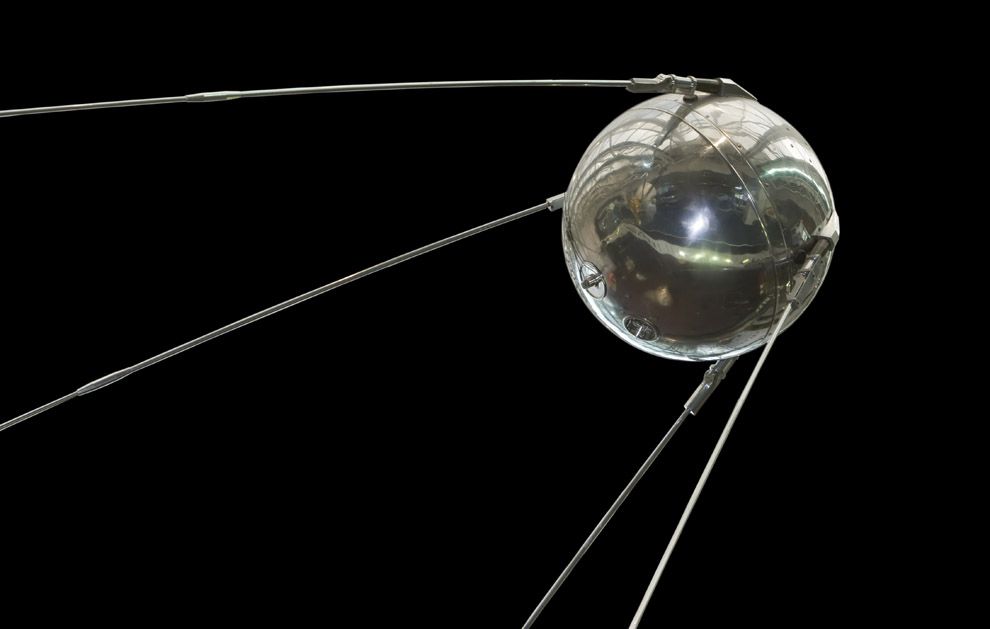 The Soviet Union inaugurates the “Space Age” with its launch of Sputnik, the world’s first artificial satellite. The spacecraft, named Sputnik after the Russian word for “satellite,” was launched at 10:29 p.m. Moscow time from the Tyuratam launch base in the Kazakh Republic. Sputnik had a diameter of 22 inches and weighed 184 pounds and circled Earth once every hour and 36 minutes. Traveling at 18,000 miles an hour, its elliptical orbit had an apogee (farthest point from Earth) of 584 miles and a perigee (nearest point) of 143 miles. Visible with binoculars before sunrise or after sunset, Sputniktransmitted radio signals back to Earth strong enough to be picked up by amateur radio operators. Those in the United States with access to such equipment tuned in and listened in awe as the beeping Soviet spacecraft passed over America several times a day. In January 1958, Sputnik’s orbit deteriorated, as expected, and the spacecraft burned up in the atmosphere.

Officially, Sputnik was launched to correspond with the International Geophysical Year, a solar period that the International Council of Scientific Unions declared would be ideal for the launching of artificial satellites to study Earth and the solar system. However, many Americans feared more sinister uses of the Soviets’ new rocket and satellite technology, which was apparently strides ahead of the U.S. space effort. Sputnik was some 10 times the size of the first planned U.S. satellite, which was not scheduled to be launched until the next year. The U.S. government, military, and scientific community were caught off guard by the Soviet technological achievement, and their united efforts to catch up with the Soviets heralded the beginning of the “space race.”

The first U.S. satellite, Explorer, was launched on January 31, 1958. By then, the Soviets had already achieved another ideological victory when they launched a dog into orbit aboard Sputnik 2. The Soviet space program went on to achieve a series of other space firsts in the late 1950s and early 1960s: first man in space, first woman, first three men, first space walk, first spacecraft to impact the moon, first to orbit the moon, first to impact Venus, and first craft to soft-land on the moon. However, the United States took a giant leap ahead in the space race in the late ’60s with the Apollo lunar-landing program, which successfully landed two Apollo 11 astronauts on the surface of the moon in July 1969.

CRIME
2011
Man who served 25 years for murder exonerated by DNA
On this day in 2011, Michael Morton, who spent 25 years in prison for his wife’s murder, is released after DNA evidence implicates another man in the crime. The prosecutor in the case later was accused of withholding evidence indicating that Morton was innocent.On the afternoon ...

GENERAL INTEREST
1777
The Battle of Germantown
Near the British-occupied city of Philadelphia, Patriot forces under General George Washington attempt an early morning attack on Sir William Howe’s British troops at Germantown. Heavy morning fog threw Washington’s divisions into disarray, and by 10 o’clock the battle was over. ...

WORLD WAR II
1943
Heinrich Himmler encourages his SS group leaders
On this day in 1943, the Reichsfuhrer-SS, Heinrich Himmler, addresses the squad leaders of his Nazi secret police, attempting to fill them with pride for the work they’ve accomplished-the murder of more than 1 million Jews in German-occupied Russia during a one-and-a-half-year ...

VIETNAM WAR
1966
Pope calls for end to the Vietnam War
Pope Paul VI addresses 150,000 people in St. Peter’s Square in Rome and calls for an end to the war in Vietnam through negotiations. Although the Pope’s address had no impact on the Johnson administration and its policies in Southeast Asia, his comments were indicative of the ...