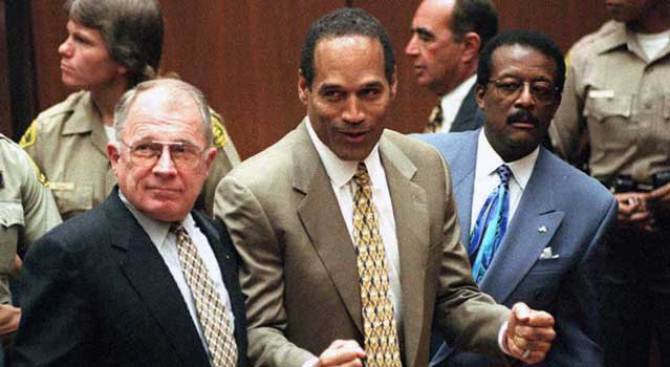 At the end of a sensational trial, former football star O.J. Simpson is acquitted of the brutal 1994 double murder of his estranged wife, Nicole Brown Simpson, and her friend, Ronald Goldman. In the epic 252-day trial, Simpson’s “dream team” of lawyers employed creative and controversial methods to convince jurors that Simpson’s guilt had not been proved “beyond a reasonable doubt,” thus surmounting what the prosecution called a “mountain of evidence” implicating him as the murderer.

Orenthal James Simpson–a Heisman Trophy winner, star running back with the Buffalo Bills, and popular television personality–married Nicole Brown in 1985. He reportedly regularly abused his wife and in 1989 pleaded no contest to a charge of spousal battery. In 1992, she left him and filed for divorce. On the night of June 12, 1994, Nicole Brown Simpson and Ronald Goldman were stabbed and slashed to death in the front yard of Mrs. Simpson’s condominium in Brentwood, Los Angeles. By June 17, police had gathered enough evidence to charge O.J. Simpson with the murders.

Simpson had no alibi for the time frame of the murders. Some 40 minutes after the murders were committed, a limousine driver sent to take Simpson to the airport saw a man in dark clothing hurrying up the drive of his Rockingham estate. A few minutes later, Simpson spoke to the driver though the gate phone and let him in. During the previous 25 minutes, the driver had repeatedly called the house and received no answer.

A single leather glove found outside Simpson’s home matched a glove found at the crime scene. In preliminary DNA tests, blood found on the glove was shown to have come from Simpson and the two victims. After his arrest, further DNA tests would confirm this finding. Simpson had a wound on his hand, and his blood was a DNA match to drops found at the Brentwood crime scene. Nicole Brown Simpson’s blood was discovered on a pair of socks found at the Rockingham estate. Simpson had recently purchased a “Stiletto” knife of the type the coroner believed was used by the killer. Shoe prints in the blood at Brentwood matched Simpson’s shoe size and later were shown to match a type of shoe he had owned. Neither the knife nor shoes were found by police.

On June 17, a warrant was put out for Simpson’s arrest, but he refused to surrender. Just before 7 p.m., police located him in a white Ford Bronco being driven by his friend, former teammate Al Cowlings. Cowlings refused to pull over and told police over his cellular phone that Simpson was suicidal and had a gun to his head. Police agreed not to stop the vehicle by force, and a low-speed chase ensued. Los Angeles news helicopters learned of the event unfolding on their freeways, and live television coverage began. As millions watched, the Bronco was escorted across Los Angeles by a phalanx of police cars. Just before 8 p.m., the dramatic journey ended when Cowlings pulled into the Rockingham estate. After an hour of tense negotiation, Simpson emerged from the vehicle and surrendered. In the vehicle was found a travel bag containing, among other things, Simpson’s passport, a disguise kit consisting of a fake moustache and beard, and a revolver. Three days later, Simpson appeared before a judge and pleaded not guilty.

Simpson’s subsequent criminal trial was a sensational media event of unprecedented proportions. It was the longest trial ever held in California, and courtroom television cameras captured the carnival-like atmosphere of the proceedings. The prosecution’s mountain of evidence was systemically called into doubt by Simpson’s team of expensive attorneys, who made the dramatic case that their client was framed by unscrupulous and racist police officers. Citing the questionable character of detective Mark Fuhrman and alleged blunders in the police investigation, defense lawyers painted Simpson as yet another African American victim of the white judicial system. The jurors’ reasonable doubt grew when the defense spent weeks attacking the damning DNA evidence, arguing in overly technical terms that delays and other anomalies in the gathering of evidence called the findings into question. Critics of the trial accused Judge Lance Ito of losing control of his courtroom.

In polls, a majority of African Americans believed Simpson to be innocent of the crime, while white America was confident of his guilt. However, the jury–made up of nine African Americans, two whites, and one Hispanic–was not so divided; they took just four hours of deliberation to reach the verdict of not guilty on both murder charges. On October 3, 1995, an estimated 140 million Americans listened in on radio or watched on television as the verdict was delivered.

In February 1997, Simpson was found liable for several charges related to the murders in a civil trial and was forced to award $33.5 million in compensatory and punitive damages to the victims’ families. However, with few assets remaining after his long and costly legal battle, he has avoided paying the damages.

In 2007, Simpson ran into legal problems once again when he was arrested for breaking into a Las Vegas hotel room and taking sports memorabilia, which he claimed had been stolen from him, at gunpoint. On October 3, 2008, he was found guilty of 12 charges related to the incident, including armed robbery and kidnapping, and sentenced to 33 years in prison.

CRIME
2011
Amanda Knox murder conviction overturned in Italy
On this day in 2011, in a decision that makes international headlines, an Italian appeals court overturns the murder conviction of Amanda Knox, an American exchange student who two years earlier was found guilty in the 2007 murder of her British roommate, Meredith Kercher, in ...

AUTOMOTIVE
1961
UAW walks out on Ford
On this day in 1961, the United Auto Workers (UAW) union goes on strike at Ford plants across the country to win higher wages and better benefits for its members. It was the first company-wide strike since Ford had agreed to a collective-bargaining deal in 1941. Ford had been the ...

GENERAL INTEREST
1981
Maze hunger strike called off
A hunger strike by Irish nationalists at the Maze Prison in Belfast in Northern Ireland is called off after seven months and 10 deaths. The first to die was Bobby Sands, the imprisoned Irish Republican Army (IRA) leader who initiated the protest on March 1, 1981–the fifth ...

GENERAL INTEREST
1932
Iraq wins independence
With the admission of Iraq into the League of Nations, Britain terminates its mandate over the Arab nation, making Iraq independent after 17 years of British rule and centuries of Ottoman rule.Britain seized Iraq from Ottoman Turkey during World War I and was granted a mandate by ...