October 29th...This Day in History (John Glenn was the oldest human ever to travel in space + others) 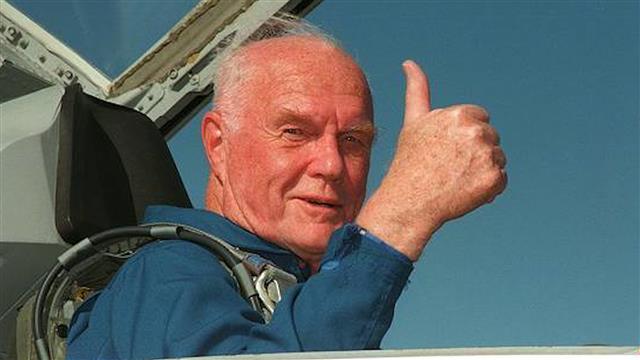 Nearly four decades after he became the first American to orbit the Earth, Senator John Hershel Glenn, Jr., is launched into space again as a payload specialist aboard the space shuttle Discovery. At 77 years of age, Glenn was the oldest human ever to travel in space. During the nine-day mission, he served as part of a NASA study on health problems associated with aging.

Glenn, a lieutenant colonel in the U.S. Marine Corps, was among the seven men chosen by the National Aeronautics and Space Administration (NASA) in 1959 to become America’s first astronauts. A decorated pilot, he had flown nearly 150 combat missions during World War II and the Korean War. In 1957, he made the first nonstop supersonic flight across the United States, flying from Los Angeles to New York in three hours and 23 minutes.

In April 1961, Soviet cosmonaut Yuri Gagarin was the first man in space, and his spacecraft, Vostok 1, made a full orbit before returning to Earth. Less than one month later, American Alan B. Shepard, Jr., became the first American in space when his Freedom 7 spacecraft was launched on a suborbital flight. American “Gus” Grissom made another suborbital flight in July, and in August Soviet cosmonaut Gherman Titov spent more than 25 hours in space aboard Vostok 2, making 17 orbits. As a technological power, the United States was looking very much second-rate compared with its Cold War adversary. If the Americans wanted to dispel this notion, they needed a multi-orbital flight before another Soviet space advance arrived.

On February 20, 1962, NASA and Colonel John Glenn accomplished this feat with the flight of Friendship 7, a spacecraft that made three orbits of the Earth in five hours. Glenn was hailed as a national hero, and on February 23 President John F. Kennedy visited him at Cape Canaveral. Glenn later addressed Congress and was given a ticker-tape parade in New York City.

Out of a reluctance to risk the life of an astronaut as popular as Glenn, NASA essentially grounded the “Clean Marine” in the years after his historic flight. Frustrated with this uncharacteristic lack of activity, Glenn turned to politics and in 1964 announced his candidacy for the U.S. Senate from his home state of Ohio and formally left NASA. Later that year, however, he withdrew his Senate bid after seriously injuring his inner ear in a fall from a horse. In 1970, following a stint as a Royal Crown Cola executive, he ran for the Senate again but lost the Democratic nomination to Howard Metzenbaum. Four years later, he defeated Metzenbaum, won the general election, and went on to win reelection three times. In 1984, he unsuccessfully sought the Democratic nomination for president.

In 1998, Glenn attracted considerable media attention when he returned to space aboard the space shuttle Discovery. In 1999, he retired from his U.S. Senate seat after four consecutive terms in office, a record for the state of Ohio.

CRIME
1925
Dominick Dunne, chronicler of high-profile crimes, is born
On this day in 1925, Dominick Dunne, a best-selling author, journalist and TV personality who often covered high-profile murder cases, is born in Hartford, Connecticut.Dunne, whose father was a heart surgeon, was the second of six children. He served in the Army during World War ...

GENERAL INTEREST
1929
Stock market crashes
Black Tuesday hits Wall Street as investors trade 16,410,030 shares on the New York Stock Exchange in a single day. Billions of dollars were lost, wiping out thousands of investors, and stock tickers ran hours behind because the machinery could not handle the tremendous volume of ...

MUSIC
1966
“96 Tears” becomes a #1 hit for the enigmatic and influential ? and the Mysterians
To this day, no one can say with absolute certainty who the leader of ?(Question Mark) and the Mysterians really is. Is he—as literalists would have us believe—the former Rudy Martinez, a Mexican-born and Michigan-raised earthling who legally changed his name to a punctuation ...

AUTOMOTIVE
1971
Guitarist Duane Allman dies in motorcycle accident.
Duane Allman, a slide guitarist and the leader of the Allman Brothers Band, is killed on this day in 1971 when he loses control of his motorcycle and drives into the side of a flatbed truck in Macon, Georgia. He was 24 years old. After Allman’s death, his band continued to tour ...

WORLD WAR I
1915
Jane Addams writes to Woodrow Wilson about dangers of preparing for war
On October 29, 1915, Jane Addams, a leading American social activist, writes to United States President Woodrow Wilson, warning him of the potential dangers of readying the country to enter the First World War.When World War I broke out in the summer of 1914, President Wilson ...