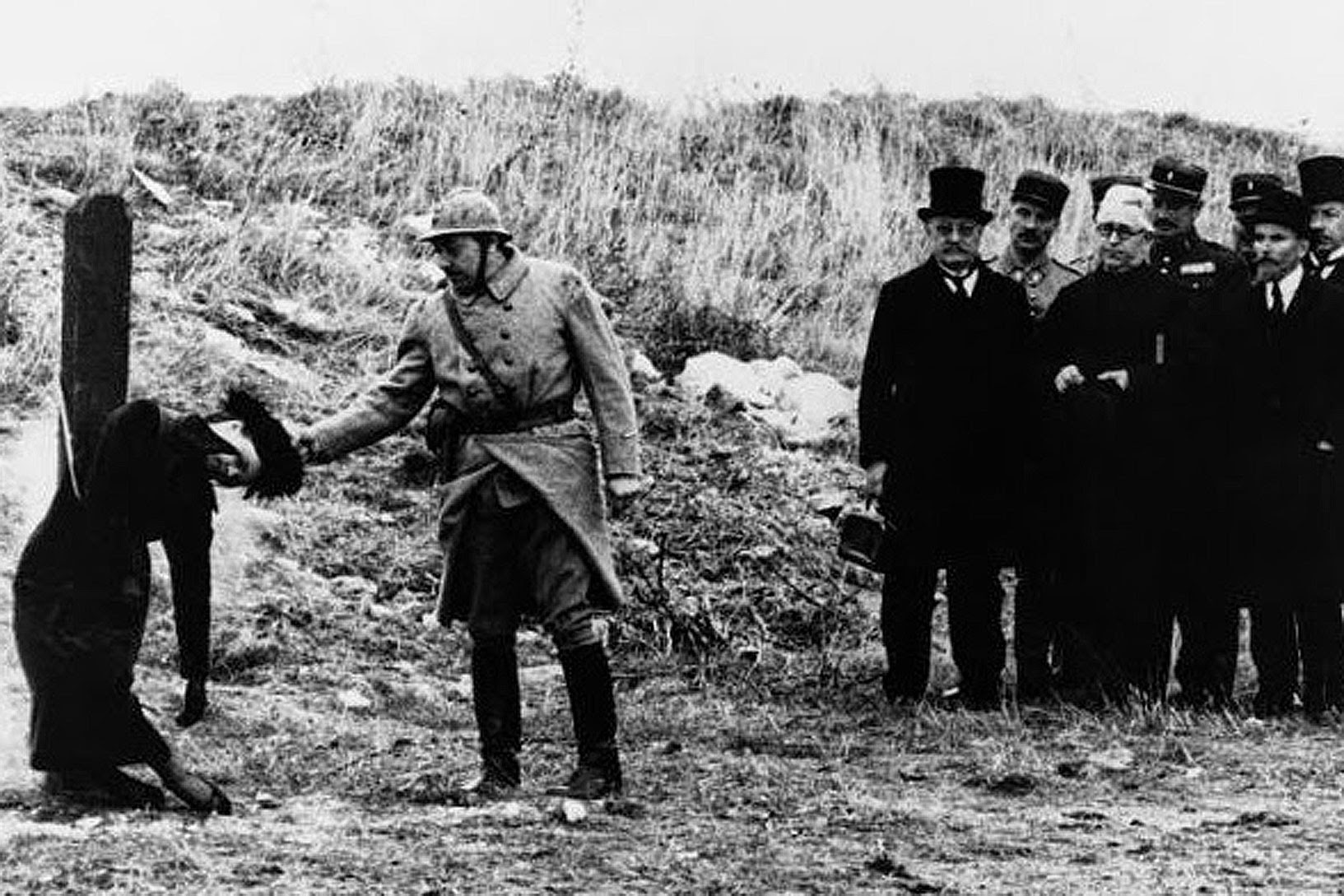 Mata Hari, the archetype of the seductive female spy, is executed for espionage by a French firing squad at Vincennes outside of Paris.

She first came to Paris in 1905 and found fame as a performer of exotic Asian-inspired dances. She soon began touring all over Europe, telling the story of how she was born in a sacred Indian temple and taught ancient dances by a priestess who gave her the name Mata Hari, meaning “eye of the day” in Malay. In reality, Mata Hari was born in a small town in northern Holland in 1876, and her real name was Margaretha Geertruida Zelle. She acquired her superficial knowledge of Indian and Javanese dances when she lived for several years in Malaysia with her former husband, who was a Scot in the Dutch colonial army. Regardless of her authenticity, she packed dance halls and opera houses from Russia to France, mostly because her show consisted of her slowly stripping nude.

She became a famous courtesan, and with the outbreak of World War I her catalog of lovers began to include high-ranking military officers of various nationalities. In February 1917, French authorities arrested her for espionage and imprisoned her at St. Lazare Prison in Paris. In a military trial conducted in July, she was accused of revealing details of the Allies’ new weapon, the tank, resulting in the deaths of thousands of soldiers. She was convicted and sentenced to death, and on October 15 she refused a blindfold and was shot to death by a firing squad at Vincennes.

There is some evidence that Mata Hari acted as a German spy, and for a time as a double agent for the French, but the Germans had written her off as an ineffective agent whose pillow talk had produced little intelligence of value. Her military trial was riddled with bias and circumstantial evidence, and it is probable that French authorities trumped her up as “the greatest woman spy of the century” as a distraction for the huge losses the French army was suffering on the western front. Her only real crimes may have been an elaborate stage fallacy and a weakness for men in uniform.

LITERARY
1960
Moneyball author Michael Lewis is born
On this day in 1960, Michael Lewis, author of such nonfiction best-sellers as “Moneyball” and “The Blind Side,” is born in New Orleans. Lewis studied art history at Princeton University, graduating in 1982, and earned a degree from the London School of Economics. He went on to ...

MUSIC
1930
Duke Ellington records his first big hit, “Mood Indigo”
The legendary composer and bandleader Duke Ellington was so famous for his poise and charm that it should be no surprise that he had a pithy story at the ready whenever he was asked about one of his most famous and enduring works, “Mood Indigo.” Of the song he and his orchestra ...

GENERAL INTEREST
1945
Vichy leader executed for treason
Pierre Laval, the puppet leader of Nazi-occupied Vichy France, is executed by firing squad for treason against France.Laval, originally a deputy and senator of pacifist tendencies, shifted to the right in the 1930s while serving as minister of foreign affairs and twice as the ...

GENERAL INTEREST
1991
Thomas confirmed to the Supreme Court
After a bitter confirmation hearing, the U.S. Senate votes 52 to 48 to confirm Clarence Thomas to the U.S. Supreme Court.In July 1991, Thurgood Marshall, the first African American to sit on the Supreme Court, announced his retirement after 34 years. President George Bush quickly ...

AUTOMOTIVE
2004
“Funeral coaches” exempted from car-seat law
On this day in 2004, the National Highway Traffic Safety Administration rules that hearse manufacturers no longer have to install anchors for child-safety seats in their vehicles. In 1999, to prevent parents from incorrectly installing the seats using only their cars’ seat belts, ...