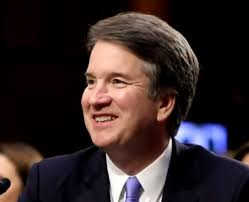 Oct. 6 (UPI) -- The U.S. Senate by a 50-48 vote confirmed the Supreme Court nomination of Judge Brett Kavanaugh, President Donald Trump's second nominee to the nation's highest court. Sen. Lisa Murkowski of Alaska was the lone Republican to break with her party, saying she was against Kavanaugh's nomination. But she voted "present" out of respect for Sen. Steve Daines, R-Mont., who didn't attend the vote because he was at his daughter's wedding. The "pairing" kept the margin at a razor-thin difference of two. Two lone holdouts also announced their plans Friday. West Virginia Democrat Joe Manchin broke ranks to vote "yes" Saturday and Maine Republican Susan Collins also voted "yes," affirming her announcement in a 45-minute speech on the Senator floor Friday. Protesters disrupted the vote several times, shouting at senators before being escorted away as Vice President Mike Pence, who would cast a "yes" vote if it was tied, presided. RELATED White House, GOP eye key votes coming in Kavanaugh confirmation The roll call began around 3:45 p.m. ET. Before the vote, party leaders gave a final plea for their case. Senate Minority leader Charles Schumer urged people to get out and vote in November. Senate Majority Leader Mitch McConnell said there could not be a more qualified candidate and said the vote will "end this brief, dark chapter in the Senate's history and turn the hpage to a brighter tomorrow." RELATED Hundreds arrested in protests against Kavanaugh's confirmation On Friday by a razor-thin margin, the Senate voted mostly down party lines in a 51-49 vote to move forward with a final confirmation vote for Kavanaugh, a move that sparked protests on the steps of the Capitol and across the nation. Protesters crossed police lines on the steps of the Senate, chanting, "November is coming," with some holding signs that read "We believe all survivors." Officers soon began detaining the protesters, whose hands were zip-tied before being led from the building. The confirmation process stalled in September amid allegations of sexual misconduct against Kavanaugh which resulted the Senate Judiciary Committee hearing testimony from the nominee and Christine Blasey Ford, who alleges Kavanaugh sexually assaulted her when they were in high school. RELATED Poll: More Americans now trust politicians than at any time since 2008 Kavanaugh denies the allegation, which also prompted an investigation by the FBI limited in scope and time. The outcome of the investigation declared the FBI had not found any corroborating witnesses to back Ford's claim. Democrats are complaining the FBI investigation is inconclusive and say they failed to interview key witnesses. Trump tweeted his support Kavanaugh and praised crowds gathered at the Capitol to support the nominee. "It is a beautiful thing to see - and they are not paid professional protesters who are handed expensive signs. Big day for America!" Protesters against Kavanaugh were seen drawing signs outside the Supreme Court. First lady Melania Trump also praised Kavanaugh as she wrapped up her tour of Africa. "I think he's highly qualified for the Supreme Court," she said, adding she is glad that Kavanaugh and Ford were heard. Susan Rice, national security adviser to President Barack Obama, tweeted she would consider challenging Collins in 2020, saying she was deeply disappointed in Collins' vote.
Posted by Ron Ernie at 16:10